How hard can that be? You go to the shop, they say blah blah, you say OK, delivered, job’s a good ‘un.

We went around four sofa shops, they were all advertising ‘buy now, pay nothing for a year, then three years interest free credit’. Found one eventually as the one Wendy really liked was too big, the others she liked one part of but not the entirety. Finally found one she liked, at a surprisingly reasonable at £875, geezer said ‘the credit terms are only on sofas over one thousand pounds, but I can put payment protection on to take it to over a thousand.’

I wasn’t having any of that. He said we could put one hundred pounds down as deposit and pay the remaining £775 in a year.  Better. I went back after I’d been paid and said ‘that sofa, one hundred pounds, do me now’. (Or words to that effect.)

Bint asked if I’d  seen someone about it, I said I had so she took my money, said it was OK, and told me to come back in when the geezer I’d originally seen was in work.

It wasn’t till I was at home I got to thinking that this was just for the geezer’s commission, I was having to make another trip to town for his convenience. Not a terrible hardship, but a piss take on principle.

I went back to the shop, (third time) and he said he needed two forms of I.D.! I’d brought them the previous three occasions, but as they had already taken my money, and not told me to bring it in with me, I didn’t think I would need it.

I lost my rag a tad, swore a bit and was ready for a fight. Stormed out and got my I.D. (Note to prospective customers; although the lad was on his break when I returned the other guy in the shop served me immediately!)

So that was undue stress.

Then Wendy starts saying we should decorate the front room before the three piece arrives.

Got the call on Thursday saying it was arriving today (Saturday) so Friday being my day off I trotted off to B&Q, under instruction to buy grey paint and white gloss. Piece of piss, I thought, how hard can it be?

Then I had to strip the front room. There are two book cases in there. I had to empty them, move them, then everything else, clean up, then start. Finally got to painting at about 1.30, Wendy got stuck in with me as soon as she got in from work at 4.30, and we were just finishing  putting the room back together, still covered in paint, when the ‘phone rang for a family emergency (which I don’t want to go into on here.)

Apparently there is a reason people pay painters and decorators!

Anyway, the sofa arrived today! Yay! End of problems you might think. Wrongly.

They didn’t take the old sofa, but have no fear, I have a plan!

Armed with little more than a faulty hammer (head kept falling off, hitting me twice!) a dinky chimnea and an appetite for destruction I set about burning the old sofa.

Kudos to DFS, in passing. Crappy woodchip and cardboard material inside, but the build quality was awesome. If we ever get the three minute nuke warning, screw trying to take your door off and huddle beneath it, just find a DFS sofa and turn it over.

Though, in all honesty this did work to the detriment of my master plan. That took me over three hours to break down and burn, and I’ve still got the cushions, springs, foamy and cover to take to the tip.

Half way through I was getting really pissed off, thinking next time I’m hiring a transit van and taking it to the skip. Then I remembered our council run a free collection of bulky waste goods service! D’oh! D’oh! D’oh! 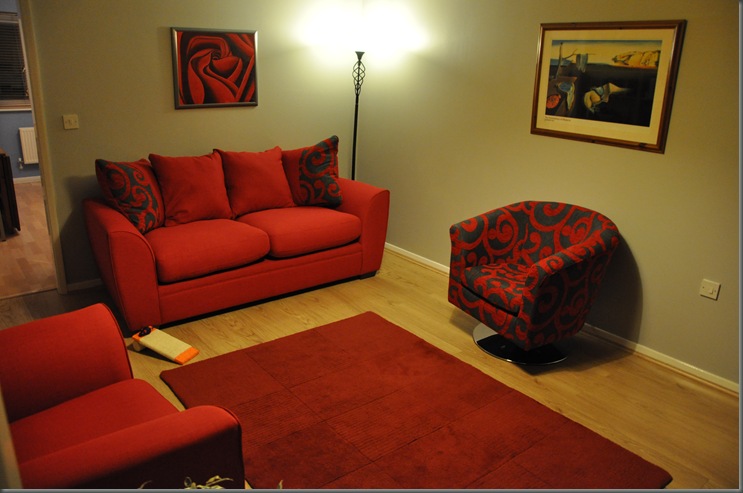 Note the scratchy thing for the cat. If it rags this sofa I’ll be showing it the video of cat-bin woman.

The moral of the story is ‘sit on the floor’.