On the Sunday night, after my weekend of jolly T.A. training, I posted a throw-away remark on Twitter saying I was finding it hard to get my head back into civvy mode. This has attracted a few wry comments.

Allow me to explain.

What I wasn’t saying was that 48hrs of T.A. training had turned me into John Rambo, a steely eyed loner unable to adjust to civilian life. That would probably take a whole week. No, I was just saying that it is a totally different mindset.

I am a Liberal by nature and politics. I rarely get myself in a state of apoplectic rage and self righteous indignation because I can usually see the other chaps point of view and often will argue it out of contrariness.

With the exception of religion. That is a whole other blog entry. Many other blog entries. I could dedicate my life to writing nothing but the arguments against religion and still have spleen to vent before I died.

As I was saying, my default state is one of laissez faire. There are things that wind me up, but I can’t see them as absolutes.

Easy to say they are a bunch of racist morons who should be sterilized, if not shot, for the common good. (Tempted to leave that train of thought right there.) But,….the thing is, I can see what made them like that. They feel disempowered, marginalised and afraid. They are probably not burdened with an excess of education, so can’t get the good jobs. They retreat into the solidarity of an exclusive white only world, and invent myths of a white only Britannia where scum-of-the-earth morons, who happen to be white, lived like kings.

The answer then is better education, more integration, better understanding of diversity (and maybe sterilization and shooting, let’s not take that off the table as an option!).

So that’s my civvy state. I reason. I empathize. I wring my hands and clutch my pearls.

Then there’s the army.

I had forgotten. It is not a job. It is a life. Let us not forget that I have already done three years and one war in the regular army. It is weird. I compared it on Twitter to a dream/ awake state. Both states seem real at the time, yet are inconceivable in the opposite state. It really is like that. For me, at least.

I was indoctrinated into army life at an impressionable age, and in a vulnerable period of my life. The lessons learned remain. Twenty years of being a civvy, all the freedoms you take for granted, work just being a job that you leave in your locker when you clock off. All forgotten in an instant. SLAP, and you’re awake. You live army, you think army, you are army.

The Captain who took us for one of our lectures was saying about that Daily Mirror story, where a ‘prisoner’ was shown with a potato sack over his head being pissed on by a British soldier. 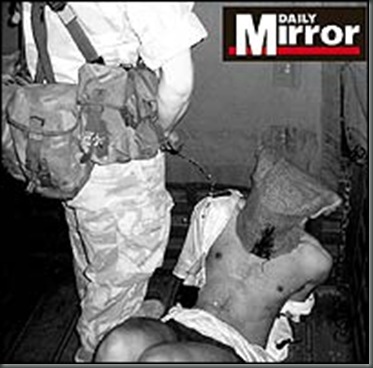 He said that it was being handed out in Baghdad free on the streets. He wondered how many British soldiers had died because of that story. (The fact that I remembered the incident, but not that it was proven to be a fake, leading to Piers Morgan being sacked as editor, is also worrying.) He concluded by saying that in his opinion Piers Morgan should have been jailed for life for treason.

I couldn’t help but agree. Treason is one of the three crimes for which there is still a death penalty in this country, so consider yourself lucky, Morgan. You fucked us over, you deserve to die.

Now does it make sense?

Probably not. It’s probably one of those ‘if I have to explain you wouldn’t understand’ things.

Anyway, I came home and it was hard to get back into civvy mode.

Just so you know.