As it was my day off today I thought I’d treat myself to a day in the Lakes, trying out that Trihard, so called ‘UK’s toughest triathlon’.

The thing is, all of the challenges I’ve set myself I’ve had a reasonable level of fitness to start with, and a huge dollop of bloody-minded determination. Basically, set my mind to it and got the job done however beastly the ordeal. Such as my first long bike ride. Set off, knocked off 51 miles (‘cos I got lost, otherwise would have done the 56 miles that is the half I.M. distance) then did a half marathon run straight after it. It was hellish, but I just got on with it and did it.

Such was my expectation for this little adventure; maybe half kill me, but just battle through.

A few minor set backs to start with. Such as it being in the Yorkshire Dales, not Cumbria. Way into the Dales. Two bleeding  hours of foot down! Then I couldn’t find the start point. Grrrr.

Got it sorted eventually.

I looked out of the car, it was a 1 in 4 ascent to start. 25% hill. Challenging. It was so long, as well as steep, that I ended up pushing my bike up a bit of it. Beaten at the first hurdle. I was stunned (as well as shagged!) but carried on. A few miles later it did it again. 25% hill. This time it went on for several miles. I ended up stood on the pedals in first gear on the lower front ring, tacking across the road from one side to the other trying to keep the momentum going. I failed again.

The one good thing about bloody Yorkshire, as I saw anyway, was there was hardly any traffic on the roads.

I got to the top of that hill/ mountain range and I looked like this; 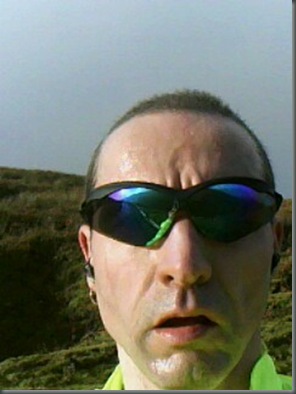 Which is not just knackered, it’s shell-shocked!

I’d ascended from the level of the river, here; 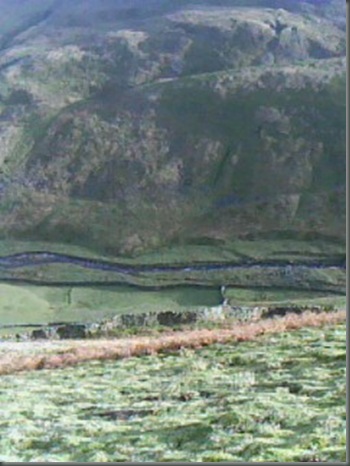 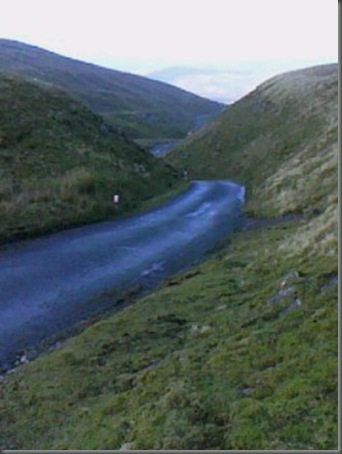 I was sorely (I choose my words advisedly) tempted to turn around and go home. I couldn’t face the prospect of going down the other side then having to come up it again. It had cost me quarter of a tank of petrol (£12.50 –ish) to get there, same to get home so I pushed on. I was beginning to concede defeat, but thought I’d better get the full measure of the course and myself whilst I was there.

One thing I did learn, for this race I will be taking my tri bars off. You are either heaving at the normal handlebars going uphill, or hanging off the brakes trying not to crash, going down.

What do you know, when I got to the point I realised was going to be my furthest extent, I had to climb right back up again!

By the time I had got to the last 3 miles I was not just beaten, I was destroyed. I’d forgotten to take any food with me, so had a massive energy crash. My legs had nothing left to give. I was riding up the start then pushing even on moderately beastly hills  (of which there are lamentably few!)

What a wake-up call!

This one is not going to be determination. You need to have the legs for the job. And food.

The full course is 42 miles which you have to complete (with the 1800m swim included) in less than six hours. I managed 25 miles in 2 hours 47. And had nothing left to give. Without the swim. Which the route map planner gadget worked out as 2558 calories due to the terrain. See above under ‘energy crash’.

I have my work cut out for me.

I will have completed a marathon, half I.M, and full I.M. distance by the time I get to this one, but I may well be proudest of crossing that line. I am in shock. The last time I worked that hard was when I first ran a mile and half, off he bat. That was fifteen minutes of panting, gasping, and pushing through, This was nearly three hours and an utter failure.

Rise to the challenge!