Things are progressing apace. Unnervingly some things are actually looking like they are coming together. Always a sign you don’t understand the awful truth of the situation, in my experience.

I went away to my jolly hols at the T.A. gulag. I was all psyched up for it. They’d said ‘this is where it gets serious’ at the end of the last course, so I was thinking of basic training. Being beasted from pre-dawn until stupid o’clock in the morning, mad infantry shit out in the field,being freezing, soaking, pissed off, morale destroyed barely functioning automatons.

Weapons drill, and lots of it. No screaming, a bit of speed marching, locker layout and room inspections (basic army stuff to maintain discipline and promote cleanliness and hygiene) one night, then one day and a night in the field. Not getting bugged out (where they wait for you to get settled in your sleeping bag beneath your hastily erected sheet then simulate an enemy attack so all hell breaks loose. Awful.) If anything I’d have to say it was too easy.

The ten days were ruined for our intake by an ex-reg (former regular army soldier) thinking he was still a corporal in the bad old days of bullying  newbies. The fact that it was a a five foot young lad and an eighteen year old girl he was threatening did nothing to endear him to the troop.

Anyhow, the corporals were all over that and he will be watched very carefully from here on in. Still, it left a sour taste in the mouth.

Cracked that then. Though with hardly any PT. I took my brand new trainers away with me thinking they would get broken in by lots of little runs. Nada. And we were expressly forbidden to do our own training in the (many, many) hours we had off at night. Apparently the fluffy new model army has the training specifically tailored to take civvies to soldiers, any further individual input would bugger it all up!

So, my fitness took a bit of a dive whilst I was away. Came back on the Friday, Sunday morning I was doing the Holmfirth 15. A fifteen mile road race around (you guessed it) Holmfirth. Which is near Huddersfield.

The smart people would perhaps have thought to check the terrain before upping their mileage. Never having been accused of being smart I did not. Thought, “it’s only an extra 1.8 miles more than I’ve already done, how hard can it be?”

It was not so much a road run as speed mountaineering. Mountain goats were tumbling past me. And my trainers (brand new, you’ll recall) were too tight, grinding the bones together in my right foot. It started really hurting at about three and a half miles. Not a good sign. Ten miles later the pain was so bad I just had to stop. I loosened my trainer right off, to the point I thought it would surely slip around on my foot and give me blisters. Started running again, no pain. Bastard! Ten miles of worsening pain for nothing!

I was hoping for a two hour time, but even driving to the start point I was doubting it. When we hit the hills on the run I realized the challenge was to finish the race. Even with the foot issues I did it in 2:10:24 . Not appalling. Seriously not great though. The joy on my face tells the whole story (!). 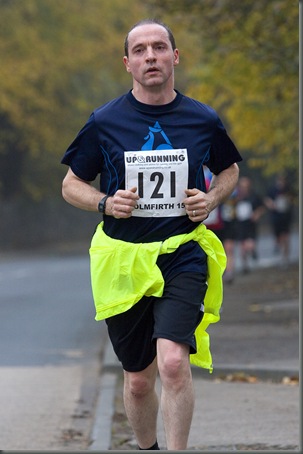 Later that Sunday I fitted my aero-bars to my racer. Those are the handle bar attachments you see the posh racer/ tri bikes with nowadays, where you lean right over the middle of the handle bars. 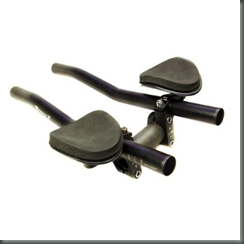 You rest your forearms on the pads (which are as far forward as your handlebars) and grip the bars. They attach to the standard racer handle bars.Still not tried them out though.

Today (Thursday) was my day off. I wasn’t sure what discipline to exercise in, but plumped for swimming as it was raining and windy. I went to the baths and started trawling up and down, trying to get my strokes and breathing right. I’d been going up and down for about twenty minutes to half an hour, with only about three pauses, when I suddenly realized I was O.K.. I wasn’t out of breath and I was keeping it up. So I started counting it out. Fifty (20m) lengths! That’s a kilometre by my reckoning, or two thirds of a mile. So I figure I must have swam a mile and half, easy, in that session! Chuffed to bits!

Last time I was at the baths I was chuffed I was getting the hang of breathing, this time I’m already at half Iron Man distance, the same as I can comfortably manage on the bike and run.

I really thought swimming would be my Achilles heel, but now I’m feeling it’s a matter of practise. If I can do half race distance off the bat, with a still pretty terrible swim technique, I can surely crack and polish it within seven months!

I’ve found a shop that sells tri wetsuits, and more importantly fits them. I was hesitant about spending on one though, with my poor swimming, but now I’m up for it! Get a suit, get in the sea and get swimming. Apparently there are good beaches off of Liverpool. Recommended by The Outdoor Swimming Society and the Marine Conservation Society. 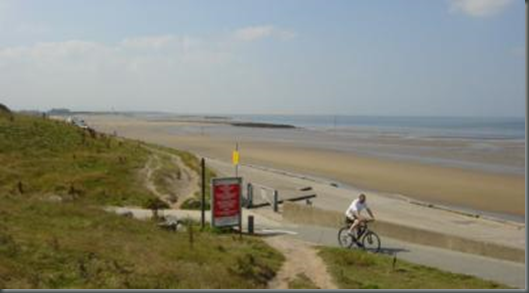 Who’d have thought that?

Also today I joined the Warrington Rifles Club, and shot of five magazines of ten rounds each. My best grouping was a shameful two inch spread, but that’s why I’ve joined to practise and get excellent. If I do end up doing a tour with the army I would love a crack at sniper-ing!