Things MIGHT be happening at work! I stress ‘might’, I’ve heard a lot of promises before, to no effect.

I have been battling for over fifteen months to get work to honour their ‘warehouse to wheels’ incentive. I paid for my own licenses, just needed them to send me out with a driver for a week (or put me shunting, or anything to get me from ‘just passed’ to ‘competent/ confident’) but all I got was promises and lies. I kept saying, ‘it’s there on the board; warehouse to wheels’, their solution was to take the board down.

Anyway, I had given up on them. Then, last Friday, I was in the transport office when one of the drivers asked if I was driving yet. I told him I wasn’t, that DHL were a bunch of bastards who would never let me drive for them. He shouted the transport manager, saying ‘this is that lad from the warehouse with his class one’.

The manager had a word with me there and then, said ‘come in Monday for an assessment’!

Still not easing me gently into the job, ie warehouse to wheels, but at least giving me a shot. Obviously I immediately started bricking it! I’d not been in a cab for over a year, and I was supposed to hop in and drive around the deliberately torturous test route. I booked three hours refresher driving, with the intention of driving around the actual course. The bits I know are daunting, I rang the people I took my class two license with as they are Warrington based. Got the number off the website, rang and made a booking ASAP. It wasn’t until the end of the call he said ‘do you know Bolton at all?’

Turns out the Warrington site has been ‘mothballed’, and no, we wouldn’t be able to drive to Warrington to try out the test route.

So I did that straight after work on Tuesday. I was very nervous. It’s the best part of sixty foot of truck, and my last memories were of the terror of those Groundhog Day driving tests.

As it turned out, I jumped in, tentatively edged us out, then was fine. He took me around some really tight corners, or so he said, I thought they were alright. My perennial problems cropped up though; passing too close to parked vehicles and carrying too much speed into situations.

He said at the end that I was still up to test standard, but my inexperience did show.

I went in work today with my heart in my mouth. The head assessor was out, so I saw the other one. He was going to take me out, then realised I had no experience. Then told me to come back later. I went back, but then they had no spare trucks. Instead he sat me down and went through three hours of health and safety and driver induction paperwork. He said to tell my manager that the site GM had told him that was what he wanted me to do. So it had been passed up the chain of command and a strategy had been implemented, it seems.

When I’d done the induction stuff, he said the head assessor was going out on a store delivery tomorrow, and he was going to take me! Or rather, he was going to go out on a run, but now he would instruct and observe me doing the delivery! Then I am to do the same accompanied by a regular driver two or three times, then in the new year they would  see if I was up to speed then send me out on my own!

IF, I said if, that actually happens, that would be ideal. Exactly what I wanted. Just fifteen months late.

I’m not getting excited yet though. First they’ve actually got to get me out of the gate in a truck, then I’ve not got to cock it up, then I can start thinking about this being real. They’ve talked the talk far too often.

Ironically, after all this health and safety driving talk, the first thing I did was run someone over in the car park!

Well, I pulled out of my parking spot and he ran straight into the side of the car on his pushbike. The front wheel went under my wheel arch and stuck with the bike still upright. He flew over the handlebars, sprawled across my bonnet, then bounced to the floor.

He wasn’t hurt but it shook me up no end so it must have been nasty for him. I was parked in a row of cars, he must have been riding along the front of the row, out of my field of vision, I pulled out, he ploughed into me. I was really guilt ridden, but I don’t think it was all my fault. He went into the side of me. He should have realised that I might not see him, and he could hear my engine. I would have been cautious in his shoes. I expect he will be, next time!

Which brings me to my cycling. I went for a ride on Sunday, my day off. I looked up a point twenty eight miles away and set off. My concessions to the freezing weather being a pair of leather gloves and a lightweight sweat shirt. What I didn’t realise was that cycling (in my army boots, to keep my feet straight) doesn’t move your toes and does keep your feet straight. Also, that gripping a pair of bare steel tri bars, even wearing thin leather gloves freezes your hands a zero degrees or below, especially when you are in one position for four hours. By the time I’d reached the half way point (twenty eight miles away, in the sticks) I was frozen. I was stomping up and down, trying to chew a solid Mars bar and get some life back into my feet. It was painful and miserable, and I still had the other two hours ride back, getting colder as the sun went down.

Then I got the obligatory puncture. Fixed it and plodded on. By the time I got home I was in a terrible state. Wendy thought I was on my way out.

If it’s cold enough for snow, I don’t go! Which, incidentally, applies to the army as well! They’re in no rush to get my training done, so they can wait until it warms up a bit for me! 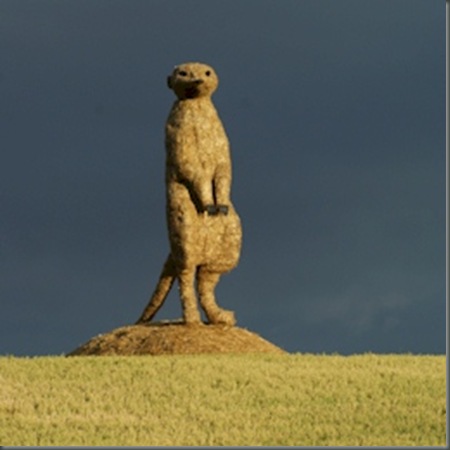 A thirty six foot, straw statue of a meerkat! In a field in the middle of nowhere! Cool or what?

Here’s a link to an article on it;

That will do for now,