The Wednesday before last was the first open water dock swim with Mersey triathlon club. This is what I joined that club for; practise in swimming in a wetsuit. I duly packed all my kit and set off to Liverpool. Need I say that I left it to the last minute? Only to find the satnav didn’t recognize the destination? So I was racing out to the car, trying a new address, not having it work, running back in, upstairs to google something close. Eventually I found the prefix postcode wasn’t right, that was why it wasn’t recognizing the addresses.

I set off late, blindly following the satnav. You can see where I’m going with this, can’t you? I got to the end of the motorway and saw signs for Bootle docks so I followed them in defiance of the satnav. Turns out Bootle docks are not the same as Salthouse docks. The satnav may have been right. When I was finally in the right neck of the woods I realized I’d forgotten the £2 swim fee. By the time I actually found the place I felt I was too late to play.

The docks itself was a surprise. I was expecting some derelict dock in a Scouse ghetto. It seems to be a des-res. Right on the sea front (obviously) with a Hilton hotel in front of it and a million people taking the air. It was posh as buggery and well crowded. Not how I wanted to do my first open water swim, in front of loads of people.

Still, with three weeks before I am to do it for real in the sea around St Michael’s Mount I determined to do it right this Wednesday. I got everything done, work, nap, shower, tea, all my kit packed, money, faint sense of where I’m going, only to find I’ve lost my membership card! No card =no swim.

Damn and blast! I am going to drown in Cornwall!

Bugger me! I was just about to put it’s been three days and no sign of it turning up. I went down for a brew, came back, sat down and there was my card, on the floor by by chair!

It must have fell down the back of the chair!  Happy days!

There you go, live action blogging. It’s the future.

I have been working on the other disciplines in lieu of my swimming. Yesterday I treated myself to a day out in the lakes on my bike. I planned on riding from Ambleside, over the mountainous Wynrose pass then over the legendary Hardknott pass. I managed the former ascent. 25% and 30% inclines. It would have been manageable if it had been short bursts with shallow inclines in the middle, but it was miles of damn near vertical! Also, I was hindering myself by staying seated. It wasn’t until I’d been beaten and had stopped to catch my breath that I watched a despicably fit cyclist go past, stood on his pedals. I got to the top with three rests. Shameful.

Another lesson I learned yesterday is if the hill is too steep to carry on, do it anyway! If you stop on a steep hill with cleats on your feet when you come to remount you can’t get both feet in the cleats and pedalling before the hill stops you. Then you haven’t got time to wrest your clipped-in foot free from the cleat and you fall off. Seven times. Ow.

I managed Wynrose pass, it took me an hour of the hardest riding I’ve ever done, but I made it to the top then blasted down the other side, hanging off my brakes for dear life. Then I saw the signs for Hardknott pass and I bottled it and turned around. I should have stuck it out, but the first hour was so hard I was scared I wouldn’t have it in me to do the return ride.

As it turns out the return ascent was quite brief. The only bright point on that was catching two mountain bikers who had stopped before the summit. I stopped near them and we had a brief chat. I was eyeing their bikes. The back cog was enormous, the front tiny! The ratio must have been ridiculous! To put it another way, they had piss easy gears, designed to get them up mountains, and they hadn’t made the ascent. Then one of them set off  up the last bit while the other one pushed his bike up. The first had to get off halfway. I hopped back on, fell off twice, then, when I’d got going, did it in one! Small victories!

To make up for it I tried a back road up the Kirkstone pass, fell off loads, gave up.

Today I’ve had a restful day. just been down the allotment. It’s all dug over, and everything I can put in is in. I can’t move the apple/ pear/ cherry trees or the blueberry bushes yet as they are with crop. Late autumn for the trees. 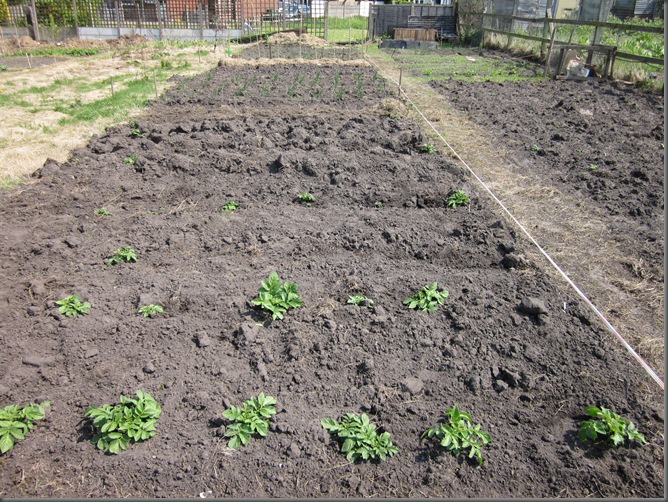 Or, from the other end, this: 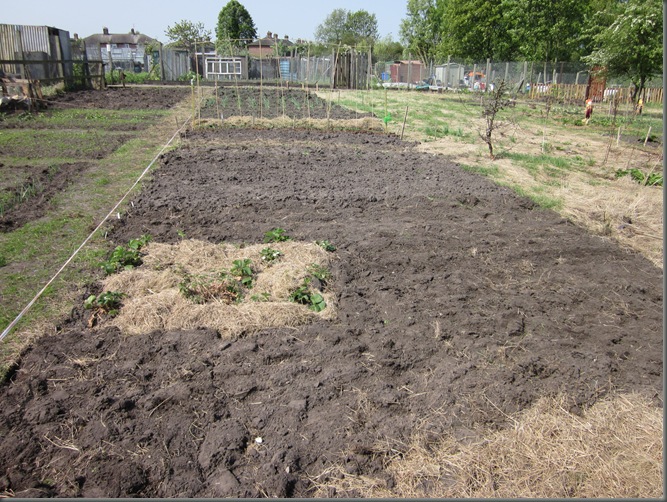 With this being the middle: 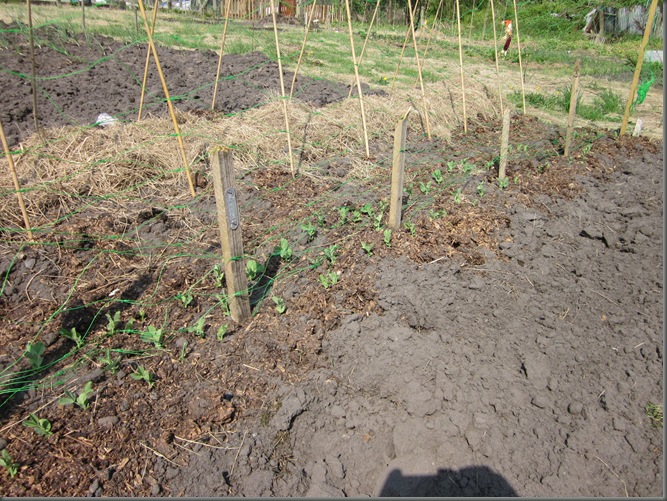 As you can see, spuds at the top, French beans, mange-toute, and dwarf beans in the middle. Although you can’t see them, there are rows of lettuce, rocket, broccoli, cauliflower, carrots, courgettes, parsley, leeks, spring onions, onions (red and white) as well as redcurrant and blackcurrant bushes. Other stuff as well that I can’t remember off the top of my head.

Today was a good day. I turned over/ hoed the last pieces of land. It’s all been freed from weed! Now I just have to keep on top of it.

Tomorrow I’ve managed to book a day off, so I’m running the South Cheshire 20, a 20 mile road race in Crewe.