Wendy was looking for a hobby so I bought her a surprise present of a clarinet. It’s well cool and looks like this: 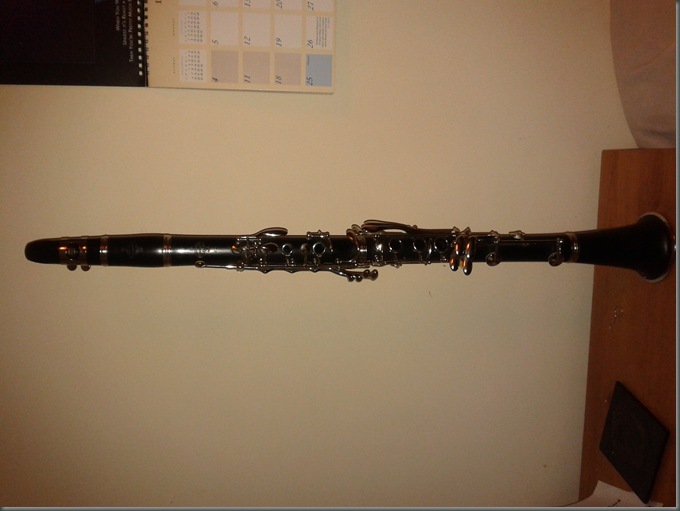 And breaks down into a natty little case like this; 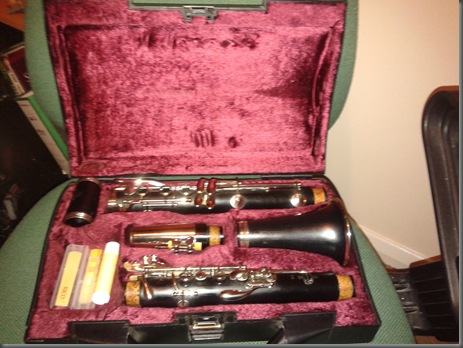 Unfortunately she likes it, so there goes another bonus present.

She only mentioned it because she loves the decrescendo, (glissando, they are calling it on youtube) from Rhapsody in Blue by Gershwin (here: http://www.youtube.com/watch?v=sXrwIHcNB5o )

That is our task for tomorrow.

It has got me back to my sax. I’ve not had time enough to sleep, never mind anything else these last few months, so sax practice has taken a serious hit. The longer you leave it the more daunting it becomes. When the clarinet arrived though I thought I’d have to have a go. Just kept making a horrible squeaking sound. Wendy could get it to blow notes, I got squeaks. (Think it might be broken!) In frustration I broke out my sax. So, all for the good. I’ve since realised the embouchure is totally different. You hold your mouth the same, but apply next to no pressure. On the sax it’s a firm bite from the top teeth, taught bottom lip over bottom teeth. The clarinet you just rest on your taught bottom lip.

Still have some way to go before either of us are knocking off the tune above.

I got myself some new ‘natural running’ trainers. They say that modern trainers encourage injuries by placing all that padding in the heel, encouraging a heel-strike running technique. Apparently this jars unnaturally and causes shin-splints and knee injuries. The latest thinking is by removing the heel padding, having more or less a flat running shoe, that you run as your body wants to naturally, landing on the balls of the feet and absorbing the impact.

They said on the website that because you are removing an inch or so off your heel that until your muscles strengthen and adjust you should do no more than a half a mile run. Increasing by no more than 10% per week.

Naturally I scorned all such mamby-pamby, sissy-boy, nonsense.  I wore them around the house for a few days then as soon as the gym was open (today) went for a good run. I thought 5 miles was a girly enough distance to try them out. To spice it up I ran half a mile at a stupid gradient then for good measure just kept putting the last quarter mile faster and faster. Ended up running at a sub 5 minute/ mile speed.

Fine and dandy. So I hopped on the push-bike machine and blasted out half an hour on that. The last five minutes of which were at killer pace as I wanted to get it to 8 miles. (I don’t know how I’d been so slow at to need to blast it, must have been the run.) I staggered off the bike and back on to the running machine, thinking to do another 5 miles. Just over a mile in my calf went. Hopped twice and was thrown off the conveyor belt of the machine.

I think I’ve torn the muscle. It wasn’t (and isn’t) cramp, unfortunately. I suppose, in retrospect, I should have thought on. I’ve been running in over-pronation (when your foot rolls inwards with your stride) correcting, built up trainers. Suddenly I’m running in flats that are letting my foot pronate. That’a a few extra inches of movement that my leg is not used to.I think the second bout may have been taking the piss.

This is all aimed at building up slowly towards next years Ironman Bolton. I knew I’d have to build up slowly if I got these new trainers so thought this was the time to do it. Which brings me to my lorry driving. I have it on good authority that work is dead now until March. No agency work. If this is the case I won’t be able to buy my place in the races for next year until then, by which time they will probably have sold out.

The Outlaw (the Iron distance triathlon I did this year) has been sold out for weeks.

Sufficient onto the day are the evils thereof.

Worry about all that bollocks later.

Well, sorry to have unburdened myself on you.

Hope you had a splendid Xmas, and you have a brilliant New Year. By which I mean I hope next year is brilliant for you, not just that you get rat-arsed on the 31st.

If you want to keep me abreast of your doings, there is a comments box below (if you don’t want to email me).

Gawd bless us each and every one!