I said that I’d got Wendy that surprise gift of a clarinet and joked  that she liked it, so no bonus gift for me. The joke was on me. She couldn’t take to it. Bugger.

On the bright side, I now have the only two instruments that use a reed. Interesting fact. Or not. Please yourselves. You got in here for free, you know.

As a consequence, I’ve been alternating my blowing between the sax and clarinet. The clarinet is a bugger. If you think about putting your fingers near a key, or are not 100% on the one you should be on, or you don’t clamp down on the reed like a pit-bull on a postman it makes a horrible squawking noise. I went on to a sax forum to see if there was a more sax-like mouthpiece and it is a common complaint of sax players. Because the sax was designed as an adaptation of the clarinet, by a clarinet player, sax players (and me) think they can just pick it up and play it. Not even. One guy on there called it ‘the misery-stick’. The consensus view was that it was a fair description.

I picked up some tips. Still, I can now say I am crap at two instruments not just one. That’s multi-talented, that is.

Anyhow, that left Wendy bereft of a hobby again. She needs one. She used (20 years ago) to play the organ (huh huh) but always fancied the piano. (Which it would have been super to have known before I got the clarinet. Still, I’m enjoying/ hating it.) I looked at the options for renting this time, as little miss changeable might not have took to the amount of hours you need to put in. They were all crap deals. ‘Rent this crappy learner keyboard and if you want you can buy it later with the rent knocked off’. Why would you want to buy a piece of crap?

The rental money would just have been a waste and the kit was such low-end rubbish it just wasn’t worth it. Yamaha, who are a byword for musical quality (and rather nice bikes, if Mr Yamaha wants to reward me for plugging his kit) have launched a weighted keys (so it sounds louder if you bang the keys rather than tap them, just like a real piano) budget electric piano. It seems to save the money by not including whistles and bells gimmickry. Most of the electronic pianos have a shit-load of sound effects and a monster computer to dick about with. This is just an electric piano. It has four ‘voices’ ie, you can play it as a grand piano, an organ, and two others. Which, truth be told, is three too many, but that’s about it. There are other features, such as programmable downloaded tunes. Don’t even know what that is.

Anyway, the point is it does what it says on the tin, for a (relatively) modest price. It’s a piece of art to look at and when Wendy has been trying on it, it has a lovely sound. 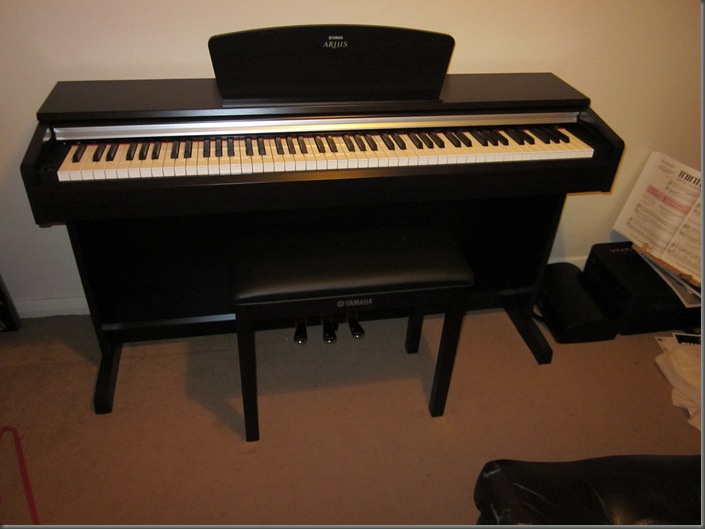 So the recent addition to the house of a ‘music room’ looks a bit like this; 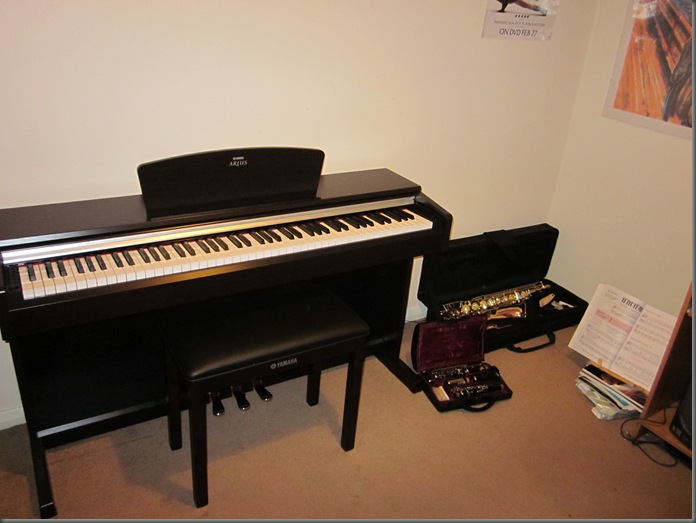 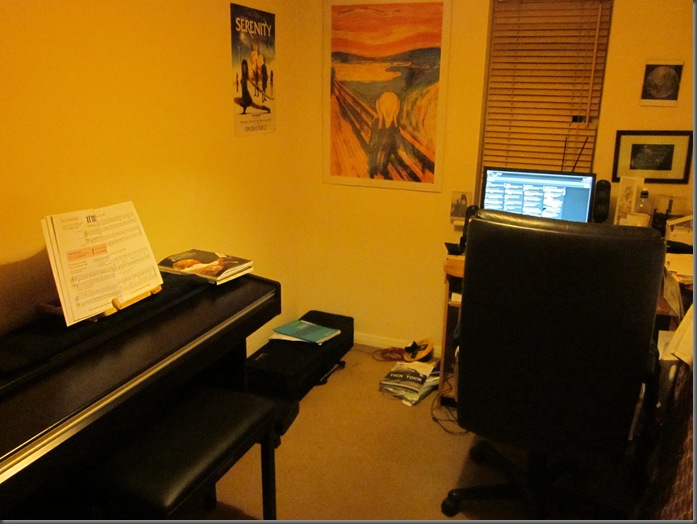 Not got room to swing a cat. And don’t think I didn’t put that saying through rigorous scientific testing.

As an aside, I went into Dawsons (music shop) to pick up a learner piano book for Wendy and happened to get served by the geezer who teaches the piano. When I went to the counter it had a picture of Wendy’s piano, so I asked him if it was any good. He knew I’d already bought it, so had no reason to lie, but he said “It’s stunning for the money.” Good choice Bucky. Mr internet did not let me down.

That’s the music news. I may, at some later date upload an audio file of the various instruments. Unless you start sending protection money.

On the driving front, I have been getting enough work to keep us ticking over, 2 or 3 days a week so far. Really we can get by on 2. If this keeps up we will have no worries keeping afloat until it picks up in March. I have made a few attempts to get other work. Not really pressed to at the moment and I’m still nervous about doing anything new. Ideally, for me, I’d keep getting enough work at Stobarts until it picks up, then get a full time job with them. Still, can’t count on it, perhaps there is another job that I’d take to as well.

The other news is my training, I’m getting back into it with a will. Whilst I have all this time on my hands it would be rude not to. My calf is still… well, you can feel it pulling, wanting to go, but I just try and force my foot not to pronate. They said half a mile to start with in these trainers, then increase by 10% a week. I started at about 6 miles and buggered my calf. I rested up for a few days then did 5 miles. It hurt but didn’t get any worse. I went back and did 10 miles. Ha! Perceived wisdom, my arse! Man-up and limp like a bitch. Works for me. Now I can start seriously building up the miles again. I am going to do Ironman Bolton this year. I’ve just decided. You heard it here first.

Watch for me on telly, I’ll be the fat old duffer being stretchered off.