I remember, many months ago, the first time someone hailed me with “Drive!” Which is short for ‘driver’, obviously, and how one addresses a lorry driver.

I was at once pleased and terrified. I wanted to be that trucker, but felt I in no way earned the title. I had the licenses, and was doing the job, just about, but didn’t know what I was doing. There are so many things to pick up; little things like working the air suspension (so you can lower the cab to pull out from under a trailer and raising it when you reverse under one so you engage properly) and working the different onboard computers to check the oil level and such. Then there was the big things; knowing where your back end was when you were cornering in the dark and reversing.

It’s only the last few weeks I’ve actually started to feel I can handle whatever is thrown at me. I’ve been doing easy trunking jobs with a few challenging bits per shift. The same company had me back after that Friday off, but on a different run. The first day my all-singing, all-dancing, £357 trucknav went tits up. I had been on the same run for weeks so hadn’t used it. That day I dropped my smartphone down the bog. It was still drying out and not working when I went to work. They gave me a new run, so I put the address in my Tomtom trucknav, which promptly died. I couldn’t get the navigation software on my ‘phone to work for ages and was going up and down the same road for about an hour looking for a road that was off the next motorway turn off.

The Tomtom had got a leap-year ‘millennial bug’, ie, it hadn’t accounted for the leap day so couldn’t connect with all the satellites that had. It transpired that in messing with my ‘phone (before the screen had dried out and was working again) I’d turned off the data connection jobby, so it couldn’t connect to the network to guide me.

When I eventually sussed that out it got me to the postcode but was guiding me into a housing estate. I resisted. Did about three laps of the one way system in Stoke on Trent, which let me tell you was designed for donkeys, not even horse and carriage. Getting an artic around there was a challenge in itself. I could see the building I was after, I did a complete lap of it without seeing a way in. In the end I tried the housing estate. I got funnelled down a little street, slaloming past parked cars, until I got to a corner with a van on one side and a car on the other, and no way for me to fit through.

I tried knocking on the houses to get the vehicles moved, no answer. I was going to have to slalom, in reverse, right out of the estate. A lesser man would have blubbed and run off. They tackled me at the end of the street and dragged me back.

Not really. I had no choice but to back out. As luck would have it a copper on the beat turned up. I didn’t think they existed this side of the second world war. He went behind me. He wasn’t much help, but it’s reassuring knowing he’s stopping blind arseholes from driving up behind you. I still had them impatiently following me as I backed up.  You take the keys and do a better job, asshat. Grrr.

I rang work and told them I’d got lost, and stuck, and was well late. It was really easy to get to, I’d taken a right at an island and driven into Stoke, if I’d have gone left (into a road marked as a cul-de-sac) I’d have been there. Then I was so late I missed my next drop.

All in all, a horrendous day. I thought they would have finished me up there and then. I didn’t get a text saying ‘don’t come in’ so I went back the next day and got everything right.

I haven’t wanted to jinx it, but I actually think I’ve got the hang of it.

As recently as when I started this job I was struggling to back on to the loading bays. I could get it backed up, just an inch or two out, then was shunting backwards and forwards aimlessly trying to correct it. Now I just reverse back, pull forward to open the back doors, then back it on. Job done. Reversing between trailers I used to panic, now I line it up as best as possible, if there is too much of a bend on I get out and judge it then continue. It’s not the confident approach where you know where the back end is, but it gets the job done safely. You don’t get brownie points for style, you do get sacked for crashing.

So all is well with work. I am actually becoming a lorry driver, the agency seem to be getting me regular, all week, work. This is a vast improvement. You know what days you are working and at what time. Not having to leave your ‘phone on when you’re sleeping in case they ring you up with a job for an hour hence.

The shifts are less than great, but then I pull up to some warehouse and I see the lads picking. Running around with someone on your back the whole shift, and I think that was me a year or so ago and realize that mine’s a pretty damn good job after all. 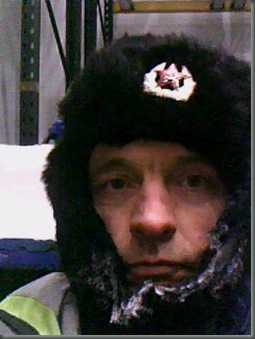 Picking boxes in minus 28C. And having them threaten to sack you because you are not hitting a pick rate. It doesn’t get much shitter than that.

My leg has buggered up again. I did one ten mile run, fine. Went out for another, 1.7 miles in, twang. Calf gone again. I’m going to have to see the doctor.

Anywho, MotoGP is coming on,