First things first; go the tories. They announce a drought and it’s not stopped pissing it down ever since. As with their genius notion of kick-starting the economy by sacking everyone. I know it wasn’t the tories who announced the drought, but I’m blaming them. Tories announce a drought, build an ark. Wettest. Drought. EVER.

I’ve been chugging up and down the M6 in it every day. Total monsoon. The spray makes it hellish difficult to see. I commented the other day that after that day’s driving I was going to have to get the barnacles scraped off the keel on my truck.

The ‘plan’ of the heading refers to my new short-term master-plan. I’m on 11.30- 23.00-ish shifts at the minute, so saxophony is out of the question. The neighbours wouldn’t like an early morning rendition and I’m be blowing a tune every time I farted if I played it when Wendy was in bed. I did try to take the clarinet in to work with me, as lots of the job is just sitting around waiting. But I felt a bit embarrassed because I’m so bad at it. Then it struck me, a soprano saxophone! They are tiny little things (they look about 18 inches tall, the curved ones) but share the same keys as all sax’s.

I didn’t want to go lashing out on another instrument though. Gawd knows we have enough to spend our cash on. Then I struck upon it, sell the clarinet and buy the soprano! Genius! That way I could concentrate on one instrument, not trying to learn two lots of keys, fingerings, and bloody embouchure. It would pass the many, many, boring hours and it would be easily portable. Plus, as it is the same, but smaller, I should be able to play it sufficiently to avoid embarrassment.

I’ve acted upon it. I’ve listed the clarinet on ebay. And the satnav holder thing I bought (then had the original returned to me). Also, it has given me motivation to start actions to get the Micra scrapped.  As soon as someone calls back with a quote that will be gone. Then it’s soprano city, baby!

Last week we finally got rid of our old, moribund cooker. I’ve had the replacement cooker selected and bookmarked for about a year on my favourites. There is never going to be a time when we say, ‘ we’ve got this spare £500, what the hell can we spend it on?’ So necessity was the mother of investment. The old cooker had lost it’s joie de vivre, and most of the heat. Very inconsistent temperatures.

The new one is groovy. Two electric ovens. Fan assisted. Gas rings. Self cleaning. Well, I say self cleaning, part of buying a tory cooker is that they send a working class serf around weekly to clean it out. If not I’m sending it back. 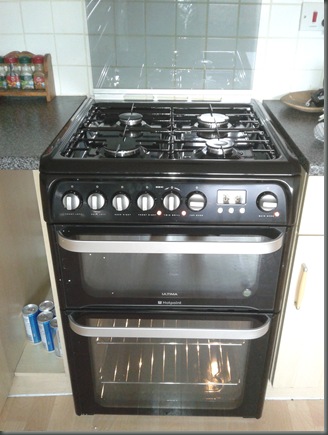 The first night we got it I went and got us a Chinese so we wouldn’t dirty it.

Concerning that speeding ticket, I have done a bit of research, and the law is; if you have been caught by the coppers for a motoring offence and not given a ticket on the spot, they have to give you notice of intention to prosecute within two weeks. It’s not quite that clear cut. They have to give the registered keeper the notice. (I am.) And they have to have posted it with a reasonable expectation that under normal circumstances it would reach you within fourteen days. Basically, I’m not counting my chickens for another 3 days (you know coppers, post it tomorrow and say the calendar was in the wrong) but it is 14 days today since I saw that police speed camera van.

Work is regular, and whilst the shifts are not optimal, at least I get the weekends off. The Colonel Sanders to my chicken of happiness is that bloody blind-side reverse. I thought I had it sussed, then on Friday I totally lost it. I couldn’t see my back end and was driving back and forth aimlessly, getting into a flap. Another driver had to guide me in. Bugger! Afterwards I thought about what I should have done, and indeed what I have been doing, and I should be OK for Monday.  I lost it though. I hate feeling like that.

Onward. I will crack it.

I was thinking about it the other day, as recently as when I started this job I used to dread reversing on to bays. You have about two inches to play with. If you are out by more than that you have to do it again. I remember wriggling back and forth, and the shunter took over and put it on for me. Embarrassing. Now I prefer to put it on a bay, you know exactly what you are aiming at and the distances to either side are fixed. I just line it up, pull forward to open my trailer doors and back on. If it’s not that bloody blind side reverse it’s getting to be first time most times.

I’ve just checked, I now have six people watching the clarinet. No bids yet though.