Finally it’s arrived! One day from China to Coventry, two weeks sat at customs, another couple of days being sent to London then Liverpool, then being held there until I paid the import tax (£18, plus £13 handling fee to Parcel Force, robbing bastards.)

Finally got it on Friday. It’s ace. It looks titchy, but it’s surprisingly loud and the keys feel natural, just the same as playing the tenor.

Here it is, the tenor and my new soprano saxophone: 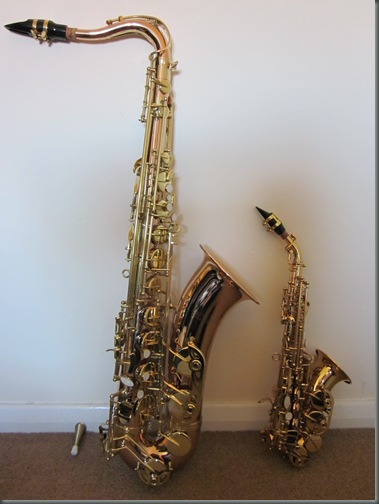 Honestly, how cool is that?

It’s like Dr Evil and Mini-Me of the sax world. Of course, looking at it now I am seeing the want of an alto sax (the middle sized one) in the picture. Maybe some other birthday.

All my news is good, really this week. Sax finally made it and it’s awesome. My leg was feeling iffy after doing my first ride-to-run session for ages. I pulled up short and walked it back home. I gave it a week and did a ten miler yesterday and my leg was fine. Apart from the blisters, obviously. 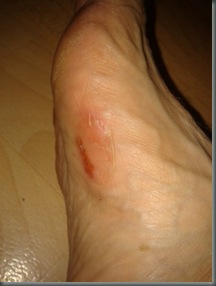 So I did another run today (Sunday). Both times nearly killed me though, due to the phenomenal heat. Unbelievable.  After yesterdays near-death-experience I bought some factor 50+ sun cream. Stable door and horses with Lord Lucan. 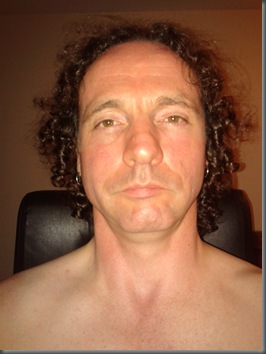 Also this week I’ve found out about a non calorie-controlled diet. You are allowed to eat as much as you like, so you are never  hungry, but only of real food. No processed, sugar and salt added food or drink and you have to keep your carb meals separate from your fat ones. That’s about it. It’s about working with the body to diet, not starving it so it tries to turn all food into fat and eats your lean muscle tissue. Sounds too good to be true. I’ll tell you how it goes next week.

Work is fine. Wendy is all recovered from her bad patch. Luke is being royally screwed by some letting agency, but I’ll have to go into that in some detail and this is just a quick one, Wendy needs to get to sleep. I’ll update that later.

Better sign off in point of fact. Got to go and roast like a potato in a microwave in my sunburnt skin.