Unlike philosophers we put a rock on the tortoise and watch it flail helplessly in the sun. Hmm, tortoise soup.

Where was I? Obviously still dieting, if a philosophical paradox/ debt metaphor can be turned into a soup reverie.

Anyway, the debt thing. We are finally getting on top! Huzzah!

Wendy used to save, then she met me and we drank our way into constant debt. It’s only since we gave up that it started to come down. I mean, I put £5K on a credit card to do all my truck licenses. The thing is, like that over-used tortoise metaphor, as soon as we raced toward it the wily bugger would move away. Before xmas we’d got it down from about £10K to a grand or so, then there was the clarinet (fail) and the piano. (There was a solid reason for buying them, not just ‘cos we could. Mostly not just ‘cos we could.) We started to pay that back then I had no work for two months. I get work again and the car dies. Had to get a different car. Then the cooker kiffed it.

You know how it is. Also there’s my laissez faire attitude to cash. That doesn’t help. (My soprano sax was a steal at the price. It more or less paid for itself. Somehow. Don’t look at me like that!)

As I was saying, before all the accusations, we are getting there. Last month, seeing as we won’t be lending Luke his bond money on flat any time soon, we stuck £666 (I just liked the number) on the card. This means we have finally broken the grand barrier!

Were it not for the fact we have a week’s holiday booked at sunny Craggy Island next month we could conceivably have been debt free this month. Oh wily tortoise, you tease us with your slow sprint.

Of course, this is never the case. I have a year’s worth of tax to pay yet. I don’t get a bill for that until next March or April, but it’s still out there, undefined but ominous.

In diet news: a pox on the house of Oliver! Yes, you, Jamie, you mockney scamp. That veggie curry I made, and the equally delicious veggie chilli the day after, put a pound on me that didn’t move for three days. Gutted. DAMN YOU OLIVER! *shakes fist*

Luke and I (OK, mainly Luke) have spent the weekend ‘rooting’ my ‘phone. Which is to say, breaking into the locked base code for the ‘phone to gain control. Once you have control you can install a fancy-pants new software package and delete all the crap. Done. Yeah, I’m so cool it hurts. When you think we didn’t even have house ‘phone a few years back, now I’ve got a ‘phone that can do video chat, surf the web, and watch live telly. “Huh, 2012, no flying cars, scientists?” Look at what you’ve got in a ‘phone. Amazing. We didn’t even have videos when I was a kid, now I can watch telly on demand, through my ‘phone! Oh,and talk to people.

The other epic news is: I HAVE MASTERED THE BLIND-SIDE REVERSE! Hell, yes!

It took a small accident (an accident!) to make it happen but now I possess the secret. TO LIFE. ITSELF!

Turns out it was simple all along. I was trying to reverse with the trailer already bent away from the cab. If at the end of the setting-up manoeuvre you turn your cab the opposite way you are straight with the trailer and can back it straight in. It’s that simple. You still have to turn it in, but when it’s straight you can see the turning point. What a fool I’ve been!

So things are pretty peachy. Apart from the agency underpaying me. Again.I’ve sent them an email. When we come back off our jolly hols I’m applying for that igloo job. Twice as much money. The man who can blind-side fears no assessment!

To my pit, busy day tomorrow.

PS look at this for sublime: 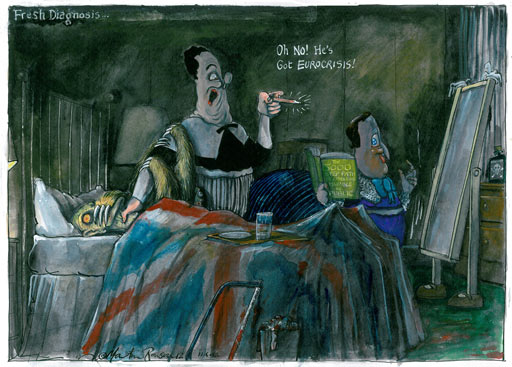 That’s George Osborne and Judas Clegg. Double-dip-Dave must be sobbing at that.