You know how I’ve said before that the parking space for trailers at work used to fit eleven trailers and now they’ve decided we have to squeeze fourteen in the same space? I moaned that it was a tight fit, but because of the time I was getting back it was always too dark dark to take a decent picture on my ‘phone. Now I have the snaps. It would have been bad enough if it had been a straight reverse, but there was a car parked in the way that I had to swing around and then try and straighten it up. Anywho, here’s the view from the cab.

Drivers side: (Look at the gap in the mirror! You’ll note it’s that tight the unit next to me had to have it’s mirror tucked in) 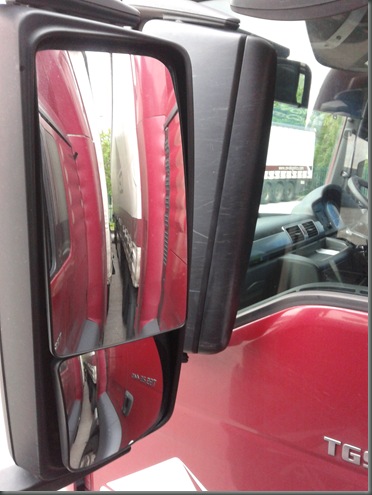 Look (in the mirror) at the view I have of the amount of space on the blind side: 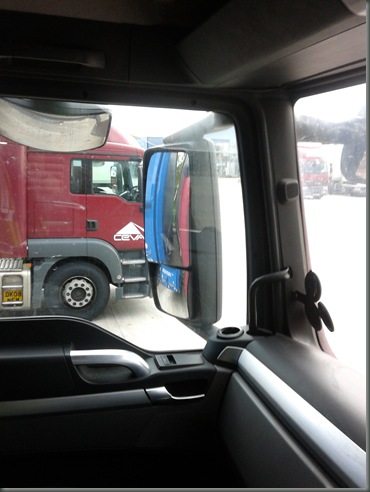 That sliver between red and blue is the totality of the gap. Try doing that at night when your job depends on it.

And finally the view from outside the cab, not quite as tight, but look between those trailers. I couldn’t squeeze between them, and like I said the wing mirror had to be tucked in or I’d have hit it. To put it in perspective, I couldn’t open the drivers door, I had to climb out of the passenger side. 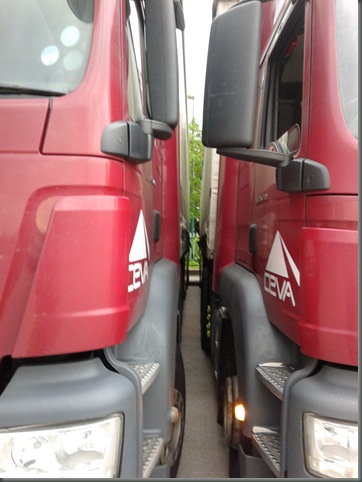 Anyway, that is what I have to look forward to on a nightly basis. I took these photo’s because I’d got back early and it was broad daylight. Almost too easy when you can actually see where you’re going. Feels like cheating.

I have totally mastered the blind side reverse now. Not just on that one specific bay, but I’ve had to apply the same technique in other situations and it works as well. Sorted.

Which leads me to my next announcement; as soon as we get back from our week at Craggy Island I’m re-applying for that Igloo-Hermes job. I can do the driving well enough, I’ve learned the value of slowing down for junctions due to the crap stacking of my loads and now know to turn the cab to the left on blind junctions so I can see both sets of traffic. Also I’ve had quite a few shifts driving units with manual gearboxes. The only other things he picked me up was being nervous (I was a wreck! I’m fairly confident now. I’d still be a bit nervous on an assessment, but only normal nerves.) and not knowing where anywhere is. That hasn’t changed, unfortunately. I have maps, a satnav, and navigation and googlemaps on my ‘phone. I can get there.

They have been advertising for drivers but I don’t want to apply until after our week away. Partly because I’m a big girl’s blouse and am scared, but also because it seems daft just before holidays. And they said they’d start me at three days a week and get me up to full time within a week or two. I need as much money as I can get before the jollies.

I’ve managed to squeeze in half an hour’s practice on the soprano whilst waiting to be loaded a few times this week. The top three or four notes are only audible to dogs I reckon. I’ve had to put a really stiff reed on just to get them. It was just squawking on the easier to blow reed. The downside being it’s like trying to whistle through an oak beam. The inverse effect of sucking a slurry drink through a straw. Cheeks bulging like a bull-frog. The embouchure control needed is extraordinary. It’s taking me a few goes just to get some of the notes. Hopefully my muscles will tone and the reed will blow in.

The other thing with work is my wages; I was well ripped last week, paid for forty hours instead of forty six and a half. When I emailed them they said it was because they had only paid me for forty hours. They hadn’t done a proper wage thing because they were swanning off for Queeny’s Bank Holiday. Alright for some. They made it up this week. Fine and dandy, but you’d think it would be common courtesy to inform a chap first.

This week saw the end of another era; I’ve finally got someone to come and take the mighty Micra to the Nissan Nirvana in the sky. £80. Mustn’t grumble.

There was an advert in the Warrington Guardian “We scrap any vehicle. Min £170.”  I rang them and they  asked what I wanted for it, I referred to the advert he said “Ooh, small car. You’ll not get that for it” What part of ‘minimum’ is confusing you, tit?  Then to add insult to injury, they didn’t even ring me back. Twice!

So £80 is fair to middling. The thing is, I’ve just received the road tax reminder so it had to go.

I’m still on the diet. I think I was being a bit too literal with the eat-as-much-as-you-like premise of the diet. I’m trying it as an eat-enough diet now. Not hungry but not trying to eat a whole cow in one go. The good news being that I continue to lose weight, the bad being that it has slowed right down. We’ll see how this new approach to it goes.

Also, when I get back of holiday and have my new job (early starts, possibility of early finishes, ie time to train in the evening) I’m going to buy my place in next year’s Ironman Bolton. That’ll scare the bejeezus out of me enough to train hard again! Also, if I do the brand name event I won’t have to say “well, it was an Ironman distance triathlon, not the real thing” and have people scorn me in the street. I don’t fancy training too hard at the minute. No sugar or words ending in  ‘-ose’  (glucose, fructose, lactose, etc) means no energy gels means an hour and a half maximum. Then it’s flop on the floor. Well, you feel like flopping, anyway. Really foul feeling. You have absolutely nothing left to give, you feel too weak to even stand. Nasty.

Anyway, that’s life at the moment.