The training has started. My first week commuting to work. I’ve found a bit of a short cut to avoid the big, busy island approaching town. It’s still about 10½ miles each way. That’s my first 100+ miles in the bag, then.

I  realized after my last post that the day-sack (small rucksack) just wouldn’t hold all my stuff so I bought a proper rucksack. I started the week with that backpack. Seriously not good. 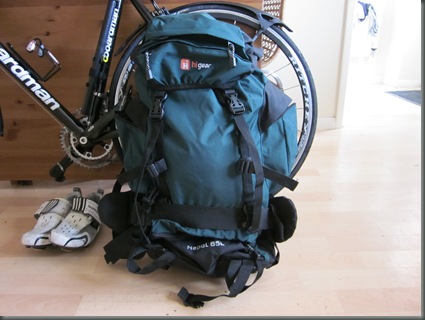 All good and well, it fits all my stuff in, but then it’s huge and painful to ride with (in a crouched over triathlon style). 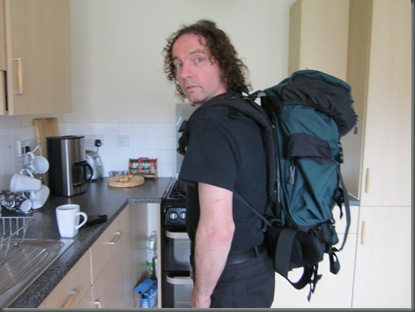 When used in anger the bag is bulging, in that shot it was half empty. By halfway to work all that weight on your spine gets really painful. I sat upright in my cab after one ride in and my spine cracked like my neck does. So less than ideal.

I mentioned that I ordered a proper modern version of a saddle bag. It looked an ideal product, but as always you pay for what your get. All the websites stocking it wanted £70, including direct from the manufacturer. I found one site (Wiggle) that were advertising it for £56, but not in stock until (expected) early July. Being a tight arse (and the big ride not being until next year) I chanced an arm and ordered it. With free delivery, not the £4 upgrade (see above). Then I got a automated email saying ” ‘cos you’ve not chosen the £4 delivery option everyone else gets first dibs, screw you.” Or words to that effect. Did I want the upgrade? No! See above, you robbing bastards.

I’d fallen out with them a bit, then a week or so early I got an email saying your kit’s in we’re shipping it. Huzzah! 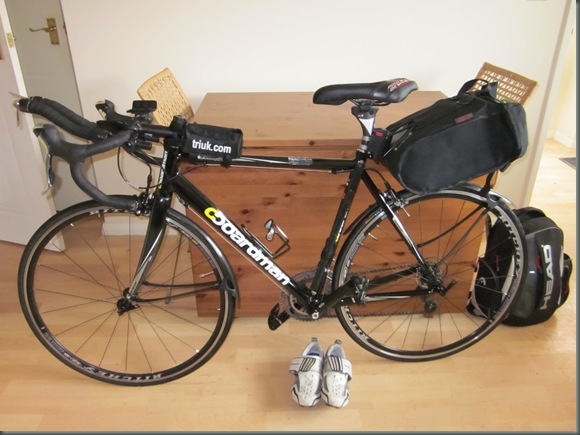 It attaches, and quick releases, cunningly. 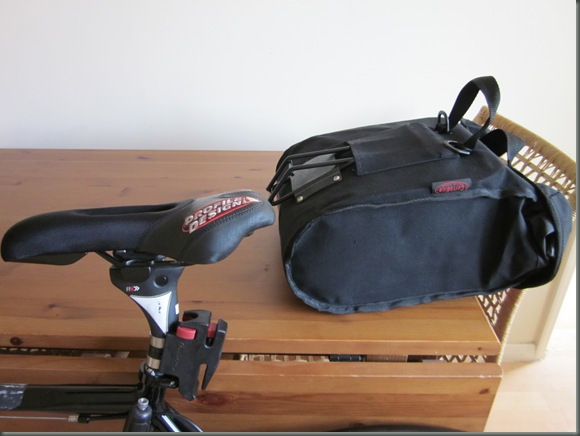 And even though it is 16 litre capacity and the rucksack is 65L I can get most everything in it. The rest fits in the ‘Head’ day-sack in the picture above. I separate them by weight so I’m carrying bugger all. I rode in on Friday and knocked 6 minutes off my time for the rest of the week. I thought it might be wind assisted as it was blowing up a bit, but I managed the same time on the way home. Go me! (That was a pitiful 45 minutes and 39 minutes respectively btw.)

Also, riding flat out 21 miles a day, whilst on this diet, has dropped 3 pounds off me in four days. Hehehe. Which is a stone I’ve lost. FTW!  (For The Win!)

(Wow that looks odd written out. My mam and dad read this –not by choice, I send it to them- and I don’t think they know the abbreviations.)

Today I have cleaned all the accumulated WD40 and road grit off my bike, let it dry, degreased it again, dried again, then applied GT80 (a fancy-pants, clear, oil spray) allowed it to seep in, then cleaned it off. Who knew that was how you maintained a bike? I used to soak it and WD and walk away, job done. Six months later when the oil had accumulated a pound of grit just spray on some more WD. Not so. Amazing the things you learn through You Tube tutorials.

Also, how to mend a puncture. It has always been; take one side of the tyre off the rim, drag the inner tube out, pump it up until you find the leak, mend, replace tube then tyre.  Wrong!

They have massive valves the tubes these days and tiny tyres. Hence me ripping a valve off a tube trying to get it out. Apparently you drop the wheel out (which is why they have a tension release switch on the brakes and quick release wheels. Ah, obvious in hindsight!) take the whole tyre off, then you can remove the massive valve on the tube with ease, throw away the tube, put a new one in and replace tyre without levers. Bollocks you can! I’m not a shrinking violet but there is no way I can get the last bit of tyre over the rim unaided. Anyway, it cuts your puncture time down from 25 minutes or so to about 10. ( I managed to get two this week, so have had a go at front and back tubes) I will be practising some more before the Ironman, I should be able to get it down to under 5 minutes.

Also I’ve done another 10 mile run today. Valuable lesson learned; never, I mean NEVER go for a run on a sunny day without water after a bacon-fest breakfast! I’ve not been that desperate for water since the desert. It was horrible. The bright side being; although it was still beastly hard and I was dying for a drink I managed to do it without stopping (apart from to splash puddles on myself) and knocked 5 minutes off my (admittedly shite) time from last week.

I don’t know if it made news off Twitter but some little Jock girl (Veg) had started a blog as a school project, she themed it around school dinners with a picture and review. She invited kids from around the world to share their meals and set up a link to a charity for starving African kids. She wasn’t critical, but some people when they saw what their kids were eating started getting antsy. Then a Scottish newspaper ran with the story and she was banned by the council “for fear of dinner ladies losing their jobs.” (That’s right, don’t improve the food, just hide the products! Derr!) Anyway, there was a huge Twitter outcry and people from as far away as New Zealand were complaining to the Jock council. They reversed their decision the following day! Yay for the internet!  Here’s a link to her blog, it’s actually rather good. http://neverseconds.blogspot.co.uk/  She was hoping to raise £40k (I think), to build a kitchen and feed a school for a year, after them banning her she’s raised over £100k! Bless her.

I can’t help thinking of young Amelia Pond every time I read it. (Doctor Who companion, you philistines!)

My other news is not so good; I’ve decided to give up on my allotment. I know! But I just can’t find the time. I’ve got an end-to-end, the Lakeland trials marathon and the Ironman Bolton to train for, and a job that gives me no free time during the week. I’ll move my apple tree, fruit bushes and asparagus to my garden (also untouched) in the Autumn, then surrender the allotment. Bummer, but it has to be done. If I get the other job my hours will only increase.

Did I mention I am eyeing the MG Midget as a possible next car? Buy a classic then just keep it. It would appear they are still manufacturing parts for it! How cool would that be?  A little British sports car. I mean the British style (not that it isn’t made here as well, but nobody says “ah, a British built 70’s car, that’s going to be a paradigm of reliability.”)

I was looking at a modern, running boards type of British sportster; a Morgan. Second hand ones were starting from £24k. OK, maybe not. You can get a pretty good Midget for around £4k. It’s going to be basic (air-con is taking the canvas roof down, it’s got four – count them, four!- gears, no airbags,no mp3 player, no hope in hell in a collision with a modern 4×4, etc) but it’s cool. And will only get cooler.

Right, time to get off and melt in my post-run heat/ mugginess.