Well, what a time we had and no mistake.

As I said last time, we booked a cheap week away in a caravan in Cornwall months ago, in anticipation of the glorious British Summer. Then it pissed it down continuously for three months. Hopes were not high.

By some strange miracle we actually had nice weather! Huzzah!

Cornwall doesn’t have a lot going for it in the rain. We had one day with a bit of drizzle, some wind, but the rest was sunny and lovely. We also had reservations about the site I’d booked. When we got the brochure that featured a bench as a selling point we were a tad concerned. We were looking forward at least to taking out pictures on the bench. There was no bench!

What is the number for the Trades Description Act people?

However, the site itself was small, well spaced caravans, under-occupied and the caravan was clean and fine. As opposed to one site we had to drive through where they were crammed together, looked old and dirty and had loads of riff-raff. And the view from the big window at the end of the caravan: 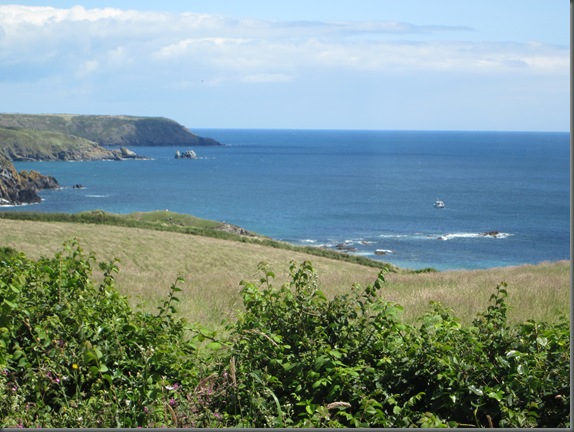 We were a seven minutes run down a steep wooded path from the beach. 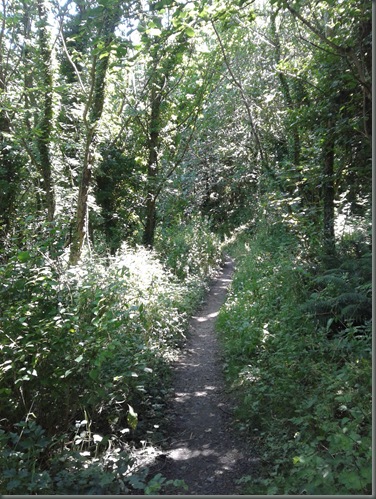 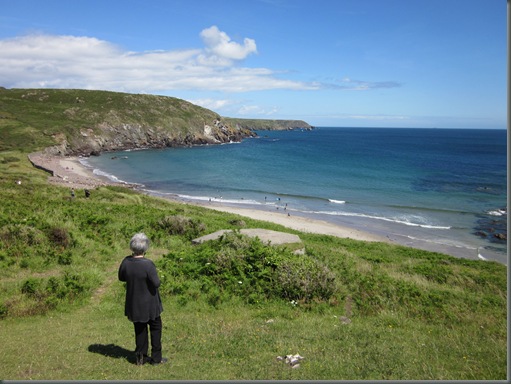 A fact I took daily advantage of with my runs. It was fantastic running down from the caravan, across a beach or two (depending on if the tide was out) then up the coast path over the hills. The best part of the running for me was the two days when I met extreme hikers. They were all togged out in stout hiking boots, serious trousers, all weather coats, rucksacks, etc. I was going the other way in trainers, shorts and a sleeveless top. At a run.

Well, it made me smile anyway.

The beach just below the caravan was good for swimming too. Not many tourists (damn their eyes!) a gradual deepening of the water and a lifeguard. Ideal. I only did one swim, but it was nice to have it there. I was putting it off as it’s my weakest discipline in triathlon. Well, in the top three of my weakest disciplines.

I took a holiday from my diet as well. I’ve put on 4 pounds but it was worth it! We found an excellent Cantonese/ Chinese restaurant (that by luck was also cheap) and an Italian restaurant that was sublime.

The downside to our culinary adventure was the Rat Poison episode. Wendy doesn’t believe it, but I think so.

We went to a local pub for our tea, and to be fair the meal was nice. Fish and chips. Cornish fish is always better than up here, but they had an really tasty herby batter for it. Very nice. However, I made some quip about the service being slow (that they must be catching the fish) that was overheard. When I ordered pudding the barman went into the back and brought it out. He went back into the kitchen then we heard (presumably) the chef saying “Oh my god! No!” The chap came out and tried to take the pudding back, saying it was treacle pudding, not sticky toffee pudding. I thought it was a massive over-reaction and ate it anyway.

Then I started to feel ill. I had to go to bed early as I was feeling so sick. Then I had to get up in the night to be sick. You’ll recall I don’t drink, so it wasn’t that.

I think the guy thought he’d sort out the gobby Northener with the addition of a soupcon of rat poison. It only makes you throw up, so no harm done. Wendy disagrees.  Either way, we didn’t return to The Rat Poisoner’s Arms.

The other thing about that place was a car parked outside. Look at this for cool: 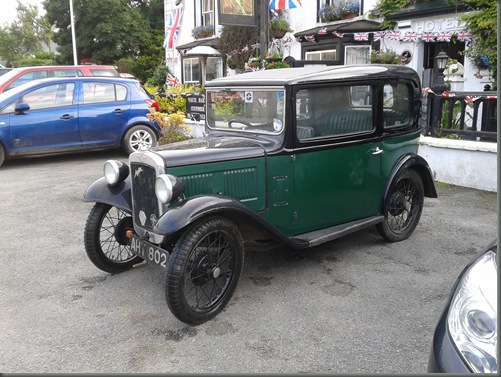 Crank handle at the front and everything! It was fully legal and functional as it drove off shortly after we arrived. Presumably so the driver could go and get his stomach pumped.

We did some touristy stuff, such as visit St Michael Mount. When I did my (failed) Cornish triathlon last year we were based in Marazion, just across the causeway from it, but never went. This time I thought we should make the effort. 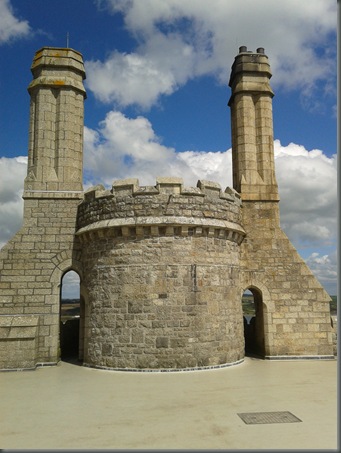 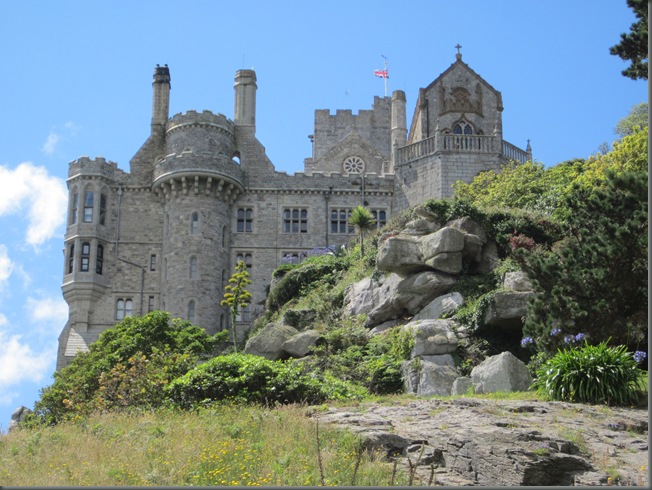 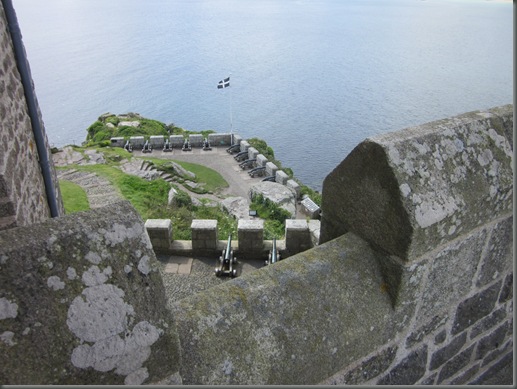 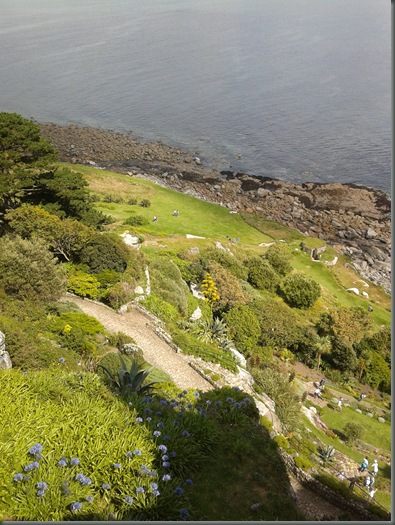 We had such a nice, quiet, relaxing time that Wendy is actually entertaining the idea of us moving back there. I’ve always wanted to move back, but Wendy has her job that she won’t be able to move with (mostly small, volunteer based C.A.B.’s in Cornwall) and her church that has loads of her family in it, so was reluctant.

It would mean me realizing an earlier ambition, that of getting a driving job with a national employer, such as the Royal Mail, then getting a transfer. I did a quick search on the jobsite for HGV drivers in Cornwall. Of the three that actually state a wage (as opposed to ‘meets minimum wage’, ‘dependent on experience’, ‘to be discussed’) there were two day jobs at £8 per hour, and one nights job at £400 per week (best case £8.33 per hour as it was 48 hours or more as needed!)

That was for now, in all of Cornwall. Given that your native Cornishman would probably give preference to a local lad/ lass that is not encouraging. I changed to location to Warrington, days £9-£12 per hour, nights £12-£16 per hour.

Talking of which, because I had the audacity to have a week’s holiday after my six months, five days a week, for my latest job the company or agency have not got me back in next week.

So I’ll be applying for that on Monday. I’m tempted by the money on that nights trunking job though. The trouble with that is; 1, I never see Wendy as it is, 2, there is a massive increase in the number of driver fatalities due to RTA’s amongst night drivers. Trying to sleep during the day around here, with the yappy dog and yappy kids about to start their Summer holidays, in sunlight… Then going in to work knackered and driving all night. Not good. But a lot of cash. Say £13 p/h average, 55 hours a week… that’s £715 per week.  The day job would be about £540. Minus four hours, fifteen minutes for breaks, usually.

Well, I’ll apply for the day job first, but if not immediately successful I think I’ll have to go for the nights job. Bloody hell that’s a lot of cash. I’d have to put the rest of my life on hold, it would just be work and sleep, but that is serious money.

BTW,the reason there are no pictures of Wendy is ‘cos she has forbidden me to post pictures of her to the internet until she’s wretched and skinny again. If that’s what makes her happy. Belson chic.

I just look the same; 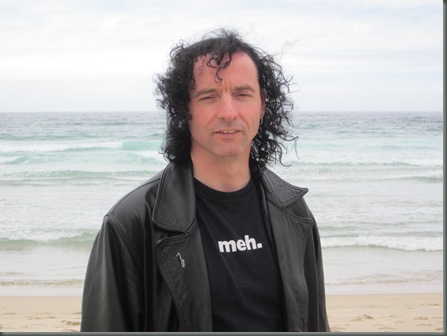 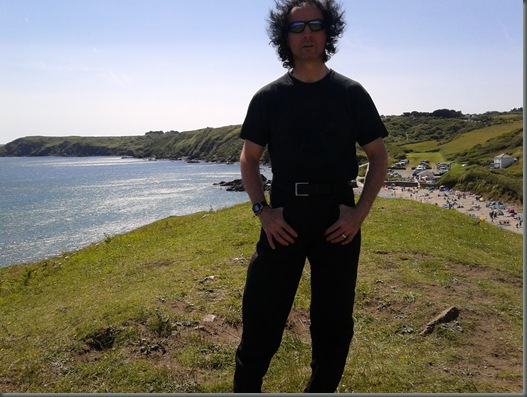 So that’s life as is. Great break, want to move back, currently unemployed, fatter and more rat poison resistant. Oh, and all the running and damnable, unrelenting sunshine has made my face all red and peeling. Ace. And the running through mud and cowshit has ruined my trainers. Good. They have been crippling me since I got them. Finally I can justify buying a new pair.