I had another go at my Ironlap today.

The bottle dynamo, which I repaired, re-positioned and tested before setting out, failed utterly. Again. I had to keep stopping, putting in the next position on my ‘phone, starting the GPS, and the satnav, seeing where I was supposed to go, then shutting it all down again to save my battery. Then I’d find I’d missed my turn and have to backtrack. And so it went.

That ‘hill’ at 48 miles, that a fellow triathlete described as “a bit of a leg-burner” is an utter nightmare. You wind up a steep hill. (You get to the summit, think ‘YAY!’, whizz to the bottom on the other side then find you’ve missed your turn and have to go back up the hill. After about 50 hard miles. Your tears on the return ascent are hidden by the sweat running off you.)  I was thinking that at least I’d done the worst hill, that now it was just normal roads back to Warrington. Ha! The road that I should have turned on to, Rivington Way (Rivington something) is the nightmare, the preceding climb was just a warm up.

I was following a dedicated cyclist (as opposed to a triathlete) who seemed to know the roads. He was having to stand up on his pedals to get up. I passed a bunch of mountain-bikers who were pushing their (off road ratio-ed bikes) up the road. I ended up stood up on the pedals in first gear. My thighs were on fire.

The thing is, on the Ironman (IM) you have to do three laps of the course. That’s three ascents of that bitch of a hill. The first one was painful and sapping, by the third…

I had to stay off satnav after that as my battery was down to single figures. Obviously I got totally lost. Then after five hours riding (and stopping to shout at the satnav) I got a puncture coming down the East Lancs. What I was doing on the East Lancs I have no idea. That took me 21 minutes to repair.

Anyway, it was about six hours I was out. I reckon I did between 80 – 90 miles. Even if you knock off a whole hour for stoppages that is, at best, 90 miles in 5 hours.

On Wednesday it was bloody windy so I had a bad ride in against the wind. I had to race the whole way as I was late setting out. As per.For a change I got an early finish so decided to make the most of it. I charged the 10.75 miles home, quickly swopped cycling shorts for running ones and shot back out. That was my first transition run in ages. The odd thing was my legs felt fresh. I was going to do a slow hour run, I was thinking 6 miles. I kept checking my watch at the mile points and I was doing 7.30 minute/ miles. That’s as good as I can manage on just a run at the moment, only about 15 seconds m/m slower than my best from before the injury. I ended up running 8 miles. The thrilling thing (for me) was that on mile 6 –7, my legs felt like I wasn’t working it, and I upped the pace! You have no idea what a joy that was. Post injury my runs have started off at a poor pace and got slower.

I was buzzing. My legs have never felt anything less than painful on a transition run, ever, and I was speeding up.

That was when I started thinking.

You set yourself goals, achieve them, then think “Meh. Anyone could have done that.”

There are yardsticks that are recognized as being a bit special, though.  A sub 3 hour marathon is one, a sub 10 hour Ironman is another. I decided to do both next year.

On paper, and in my head, all eminently do-able. Hard, yes. Challenging, doubtless. But do-able. Then I did that ride today.

They say choose your marathons if you are going for a PB (Personal Best, you knew that, right?) for instance no-one would break any records on The Lakeland Trials one I did. You choose a flat course. So, for next year, I think I’ll keep training on the Ironman course but do the Outlaw again. The year after, when I’ve really had chance to build up the necessary muscles I’ll do the (harder) brand name Ironman. For the Marathon I think I may as well look at the Liverpool one. I’ll research it first, but it’s on the sea front, you wouldn’t have thought there’d be many hills.

That way I can still achieve my goals. I could do the branded IM next year and grind it out, just going for a finish, but it’s a lot of money so I only want to do it the once. Do it once and do it right. a proper, branded IM, sub 10.

The best news about today’s ride…er, the only good news about today’s ride, was my bum. Last year, in those cheapo cycling shorts (with basically a thin layer of foam in the gusset) every long-ish ride (say, over a few hours) got more and more painful. It was the main thing that kept me going through the ride on the Outlaw; the thought of running, not sitting on that agonising saddle. The truly sad thing is; (as with my ‘snip’, now I come to think about it) I went through hell because I thought that was just how it was. I didn’t know it could be any better.

On the ride today, wearing my fancy-pants mankini design cycling shorts/bib with a specially designed padded gusset, I was relatively fine. By the last hour it was getting a bit uncomfortable, but not bad by any means. Last year I was up and down trying to find a position that hurt a little bit less. I can’t remember if I’ve posted a pic of my shorts/bib. Here they are (possibly again): 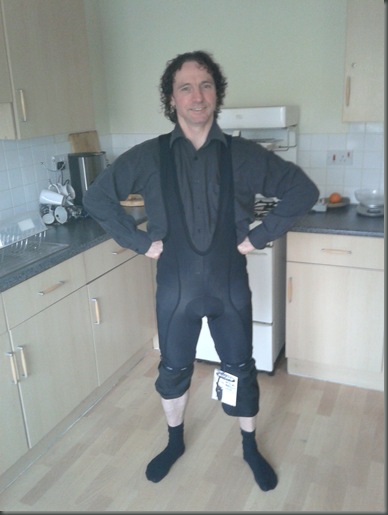 That was when I’d just got them, hence the tag on the lag, and my shirt and trousers underneath!

The downside to my sporting pursuits is I now know how Wendy feels when her heels come back into fashion. When I go out (especially in my new trainers) I look like an Olympic newbie. Every bastard is at it now, running or riding in brand new kit. I may have to start wearing all my trophy tee-shirts from last year (Lakeland Trials Marathon 2011, etc) with the 2011 underlined.  Gawd bless ‘em for starting though, that’s when it’s toughest. One chap at my works has just bought a road bike, another is eyeing a dear one. Suddenly I am the authority on all things bike. Damn the Olympics! Bright side: it should give me a source of cheap fancy-pants second hand bikes in a few months.

The Seat Alhambra (bike bus) plan has been put on hold. Wendy was all excited by the plan, saying we could go for weekends away. I explained it was just a car with the seats taken out. We could, if next door were too noisy, happily sleep in it, but there were no toilets or living facilities. She’s not sold on that at all. I don’t actually need it until next year, so wait until I see a good one. The bloody things hold their value. And a lot of them have been used as taxis. Got to avoid those. Or, if we are really flush, buy a camper van. It’s not like it would cost me a lot in diesel, I ride to work four days a week (I rest my legs on Friday for the weekend) and I won’t even be running Wendy in to work if I get the morning start job at Hermes.

I’m not pushing that at the minute. My current agency keep booking me in for a week at a time, this other agency, for Hermes, seems to be “Quick! Can you work tonight?” I’ll do that when I have to.

Well, sorry. That was a tedious. To be fair that’s about all my life is at the minute; work, sleep, exercise.

Makes Jack a dull boy. Oh, and my diet. I’ve lost over a stone, but I genuinely think I’m putting on some muscle now so the weight thing might not tell the whole story. And my bones are growing. And I’ve not had a shave.

Wendy says I’m looking skinnier than in years. Bearing in mind I did the Outlaw last year, that must be good. I think the word she was groping for was ‘buff’, but I’ll overlook it.

Queen keep popping in to my head “build up muscles while your body decays.” Midlife crisis in a nutshell, Mr Mercury. In a nutshell.

And on that nutshell, goodnight.