I’ve got my passport back, all brand new and funky with a less serial-killer/-yak-molester photo’ in. Which is always a bonus if you want to try and get through customs without a cavity search. At the very least I expect flowers before that.

The French is progressing. Slower now, but I am understanding it. Instead of giving you lists of words and all their different endings he’s explaining the logic behind the endings. Whilst building your vocabulary and giving you practice in structuring the sentences. Negations are tricky. Adding an N, flipping the order if it’s a question, changing the ending of the verb, and then working out where you are going to stick the ‘not’.  He says he’s teaching us how to use the verbs, “if you can use the verbs you can use the language.”

Anyway, I do half a C.D.’s worth (about an hour and a half/ two hours) then my brain melts out of my ears and I have to call it a day. The next day I go back over the last half of what I did (quarter C.D.), understand it this time around, then do another quarter. This way each day is half revision/ consolidation, half challenging and moving forward.

The speed of progression has slowed, but it’s solid learning. I’m not skimming and moving on without understanding.

I have to say, even though it’s only French, the first choice of UK second languages, I am quite thrilled about the thought of having another tongue. Hopefully German will come a bit easier after picking up one language. Who knows, maybe finally learn Russian properly?

All is going swimmingly, I’ve got my passport and am learning French, Wendy has sent off for her passport, I’ve sent off for that police criminal record thing… and that’s where we hit the wall. That was a formality. I’ve only got a driving offence and (apart from 3 points for speeding- that now stay on four years, grrrr- off next year) it is ‘spent’ and history.

Apparently if you’ve had any brushes with law if you are applying for a foreign visa you HAVE to declare them. Ace. So I can’t waltz into the states and test my passport that way, I have to apply for a visa and go through an interview process.

With Canada, they respect other country’s ‘spent/ clean slate’ policies but you still have to apply for a rehabilitation of offenders form and be judged. So stupid drunken 30’s me may have just shafted TT, upright-citizen me good and proper.

Not over till the fat trucker sings.

To prove the camera does indeed lie, as evidenced by the fact there are professional photographers,  here is a shot of me crossing the line. 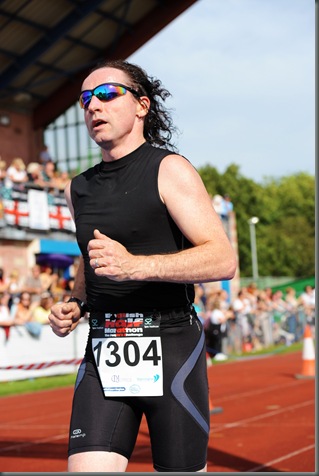 From that you’d think I was comfortably charging across the line, hair blowing in the wind. Actually I was shuffling across on pure determination alone, in a whole world of pain.

The Outlaw triathlon (whom I follow on Facebook) announced it was selling places for 2013. They said it on Friday, when they’d been open for 24 hours, and over half the places had already gone. Wendy encouraged me. I’m in!

Oh bloody bugger! I’m in the Outlaw. Again. I swore ‘never again’, after the last one. This time I want to crack  sub 10 hours. That would be a massive achievement. That’s not your mamby-pamby ‘I’ll be happy with a finish’ Iron distance tri. That’s full-on, flat-out, taking-it-to-the-max-and-keeping-it-there for 9 hours 59 minutes of pain.

I reckon I can do it.

Now I have sussed out that hills make you faster I can improve. Before I was running. And running. And running. I was always trying to push it a bit but have enough left to finish. Hill work you just endure going up, then go like the clappers going down and magically you get faster! Nothing in reserve, keep going or crash and burn. With that in mind I’m eyeing a Rivington trials half marathon in a few weeks. Nothing but evil, killer hills for 13.1 miles. Yeah, baby!  I’m going to go for a run in a bit and see if I can avoid cramps. If so I’ll be entering. Post injury I’ve been doing 10 mile runs, with three 13 milers. Today, as I’m back in the triathlon game, I’m going to raise the bar. A hilly 20 miler.

I’ve a week left on this job, then I’m going to try to get on a morning start. Once that’s in the bag I’ll be taking swimming lessons, 1-on-1. If I can knock the swim down an hour I’m in with a shout.

In other news, my old leather trenchcoat has been consigned to the great Goth wardrobe in the sky. I was trying to pimp it with a Sisters of Mercy logo. I had the brilliant idea of getting a sticker, like the Darwin-in-a-fish-with-legs one I’ve put on the car. It looked groovy. 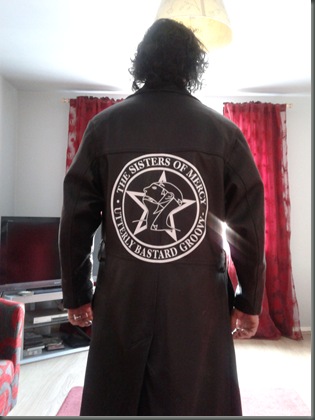 However, it was meant to stick on glass or smooth, rigid surfaces. I could see it just peeling off, so I bought some spray glue. That shit is serious. It stuck alright, but then stayed sticky. I thought it would set after a few days, no. Bastard. In the end, when I finally tried to wear it, where the coat folded when I sat, it stuck to itself and peeled the sticker off. Gutted.

So it was back to ebay for new casual attire. 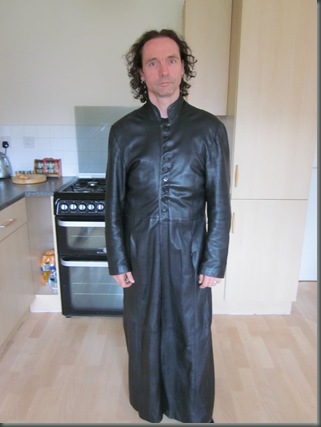 Not the best shot of it. Little Cat could probably take better photo’s than Wendy, but it’s got a certain casual attire chic. I need to fill out up top, really. (I must, I must improve my bust.) Huzzah for swimming.

By the way, you know how I love Twitter? Here is an example of why; the Olympics closing ceremony. Apparently Danny Boyle’s opening ceremony was a brilliantly conceived, spectacular celebration of all that is good about Britain. The closing ceremony, by all accounts, was a shambolic bag of tits.

Here are a few of the comments from the night.

“That tight-rope walker is doing well not to take the easy way through this dirge.”

“This is what Las Vegas would have been like every night if the Nazi’s had won the war.”

“This is a song about Syd Barrett taking too many drugs and going mad. An impulse we can sympathize with right now.”

“This is like Danny Boyle jumped off a Bedford Falls bridge and Clarence the Angel is showing him what life would be like without him.”

“This is the nightmare of a depressed worker who fell asleep at the end of a ten hour shift with Heart FM playing over the factory tannoy.”

“If this was cruise ship entertainment you’d be in a dinghy in inky darkness shouting ‘fuck it I don’t care leave me’ at port authorities.”

“USE THE ROOFTOP MISSILES NOW. IT’S OUR LAST CHANCE.”

“At the beginning of the evening Brian May’s hair was jet black.”

“Do you hear that scrapping sound, that’s Freddie clawing his way out of the ground to come punch Jessie J up the bracket.”

“This is the spotify playlist of a serial killer.”

I was crying laughing. The abuse was brilliant.

The on the Paralympics closing ceremony when Coldplay did about 6 tracks and Twitter got into a tizzy about it someone posted: “I’d rather listen to Hitler sing 80’s power ballads than sit through another Coldplay song”

As someone noted, before Twitter people only used to watch programmes they liked. I don’t watch at it, just enjoy the merciless critique-ing.

Right, that expanded beyond measure. Time to run.

PS, that nearly killed me. Once again my ambition far outstrips my ability. Any run that includes the run up Frodsham hill is a tough one, putting that as the middle point of a huge step-up to a 20 mile run is just stupid. Still, I did it. Crap time of 2:55.31 (for 20.21 miles. Poor, but look at the graph :

Bright side; I followed the tips for downhill running and didn’t cramp! Yay! Entering the Rivington trials half as we speak.