Just a quick one. I had my first crack at my new run yesterday. I went to some hideous one horse town on Friday, end of the M65, Barnoldswick, Lancashire. Tight as buggery getting in, stupidly tight crossroads to turn down, scary tight bays. It seems that is going to be a regular feature on my new run. I didn’t do it yesterday, (Monday) but I heard them saying that I was to take returns there today. Ace.

My truck driving instructor gave me a tip, he said if you see a railing on the pavement on the corner of a turn it’s a visual clue. It’s been put there to protect pedestrian. ie, it is so tight there is a good chance your trailer will mount the pavement. The crossroads going into Barnoldswick has railings on all four corners. And re-enforcing stumps before them.

You have to drive in to the oncoming lane, take all of it, and then swing in. That *just* gets you around the corner. To add to the fun there is a cop shop on one of the corners, so there’s no getting away with a hit.

The run I was told I was doing, and that I did yesterday, was set off from Irlam, run down to Crewe, pick up a trailer and take it to Cowley, Oxfordshire, then come back.

I was thinking it wasn’t going to last long as a job. I couldn’t understand why you would pay someone to start in Irlam, run down solo (without a trailer) to Crewe (an hour’s wages and diesel) before starting the run. Why not just get someone from Crewe to do it? If I have to take returns up to Barnoldswick first that makes sense.

My first run yesterday, then. I drove into Crewe, (I went there on Friday as well, so that was easy enough to find) and was told to shunt a trailer onto a bay as they were going to put my load onto a different trailer. OK, fair enough. I picked up the trailer, drove around to a bay and was just about to start to back on when I saw the main transport manager had come out to watch me. As it was my first run for him I thought he’d come out to assess me. The skill in artic driving is 95% in the reverse. No pressure then. I reversed it on in one, then took a little shunt to straighten it up a bit. Not too shabby.

It turns out they have a H&S system in place there, whereby someone from the office has to physically unlock the bays when the trailer had been made safe. ie, when the driver’s keys have been handed in, or in this case, when I’d dropped it and pulled away from it. He wasn’t there to judge me. D’oh!

That went about as well as can be expected. Which is to say; it took me about an hour just to get out of the yard. Then a quick tootle down to Cowley. Because the M6 from Irlam to Crewe was so congested I was really up against it, trying to beat my tacho. By law you have to take a forty five minute break after four and a half hours driving.  I got into the site with about eight minutes to spare and then they said I had to back it into the warehouse. They have two doorways cut into the side of the warehouse. There is enough room to back in, but it’s not what you’d call comfortable. 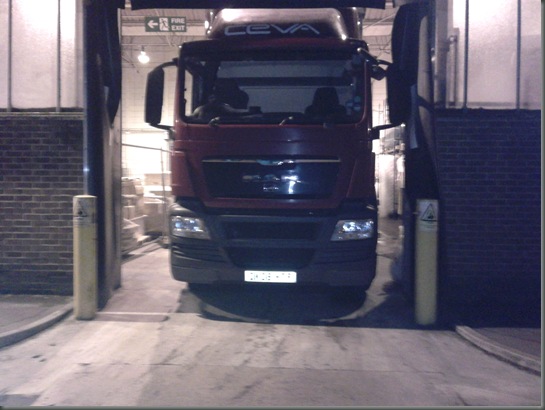 The bitch of it is; you can’t drive forward, get it straight and reverse in. You have to start your reverse on a two lane road at 90 degrees to the doorway. They had trucks parked on the road as well. *sobs* When I was driving out there was just enough room for me to get my trailer level with the posts then put it on full lock. Getting it reversed in was … challenging.

Especially as I was against the clock. I did it in about three minutes. As you can see from the pic, there was stuff to the left and right of the straight-reverse position, so I couldn’t swing wide and straighten up inside the warehouse.

When I got out (and finished shaking) the guys were saying that it was bloody good driving, apparently that was the harder of the doors (thanks for telling me!) and they’d had drivers take fifty minutes to get in.

This is my final weakness in my driving. I’ve mastered the blind side reverse, backing on to bays (ha! We laugh at backing on to bays!) now it’s just the ninety degree reverse. It’s having the confidence to put your arse end in when you can only see one side. Now I am going to get nightly practice. I was saying to Wendy, if I believed in such, it’s like I’ve been given the daily blind side reverse to do until I mastered it, now I’ve been given practice at my last weakness.

There was a run for Stobbarts where you had to do a ninety degree reverse into a parking bay with no room to straighten up. I simply couldn’t do it. I was going backwards and forwards, sweating and flapping, getting nowhere. One of the other drivers ended up getting out and talking me back and even then the driver in the bay next to me had to pull out to give me more room to swing in. That was about December-ish. Last night I banged it in.

Now there’s just the small matter of doing it every night. Without ever getting it wrong. No pressure.

I say my final weakness, there is also the small matter of being terrified of finding anywhere new. With the help of my truckers map, satnav and ‘phone satnav I can do it no problem. It must just be a residual terror from the Stobbart days when I was really shit and flapping. God that was a shit time. If I’d have had any realistic option then I wouldn’t be trucking now. That was like a barely controlled panic attack the whole time. Horrible, horrible.

Well, once again my ‘just a quick one’ has bloated out.