Last night was bloody focusing. All that bollocks about “the weight of the truck melts the snow”.  Which is why every episode of Ice Road Truckers is 30 seconds long. They start the truck then plunge straight through the melted ice and snow to a watery grave. Clearly I didn’t think that through.

Around Stoke the third lane was snowbound, the middle lane had an inch of compacted snow/ice and the slow lane had two mostly clear tyre tracks. Then all it takes is one want-to-live-forever numpty to slow down to 30 mph and everyone is stuck behind them. Until you’ve had enough and pull out into the middle lane. Then it’s a matter of holding your nerve. Artics are just a ‘unit’ (the cab and 2 or 3 sets of wheels) and a separate trailer. The only thing making it one truck is a ‘pin’ (a 2” round post) on the trailer slotting into the ‘fifth wheel’ (a mechanism to secure the pin) on the unit. So everything rotates around the pin. This means on ice if you accelerate a little too hard the tyres spin and the unit pivots around the pin. That wakes you up. Worse, when you are going down hill you are scared to brake hard in case the trailer pushes the unit into a jack-knife.

One of our trucks was stranded last night as it hit a hill and lost all traction. I was having real issues getting the bloody thing moving in the snow. I had to reverse a trailer into a parking spot in a snowbound yard. It must have took me 8 shunts back and forward to get enough speed up to reverse all the way in. That was only on a slight incline. The other truck was up in the wilds past Bolton.

In Lymn services the snow came down that hard and fast that some wag built a snowman in front of someone’s truck whilst they were on their break. 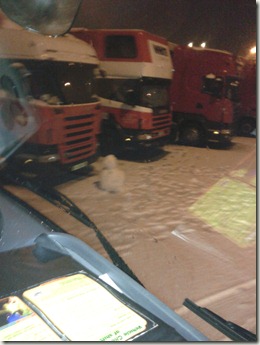 I survived and made it home in one piece at ungodly o’clock, then had to get up 5 hours 20 minutes later to go for a recce run of the Bolton Hill Marathon. I got up after struggling with the alarm on my ‘phone, turned on the PC to check the address and saw a ‘CANCELLED’ email. Ace. It took me an hour to get back to sleep. Grrrr.

In other news, I finally made it to the other Wing Chun class (in the same Kung Fu umbrella group) in Manchester last Sunday. You know how I was saying the class I go to on Thursdays only has about 8 people, all newbies, so it’s good for almost personal tuition? I was worried about starting a big new established class.  The Sunday class had 4 including me! 2 experienced and me and a young lad.

The not so great news is the head of the umbrella group likes loud colours. And apparently has a system of different coloured tops each year (presumably so you can monitor who’s up to date with membership).

I am the first to get this year’s top. 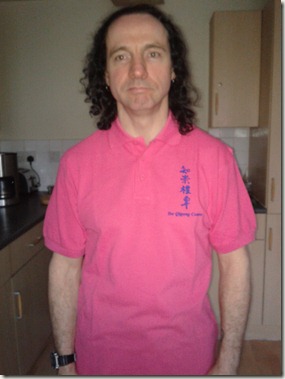 The only bright side is it has engendered some banter on Twitter, mainly with my (straight, male) chum @735songs.

Me: There’s a whole fisheries worth of salmon there. #pink #denial

Me: I joined this Kung Fu club, they have a different colour top each year. Imagine my joy when that arrived yesterday. #salmon

Me: The rest of the club kit isn’t much better. The arseless leather chaps chafe and the moustache itches.

@7: *turns down brightness on phone purely because of your avi pic* #pink

Me: It’s the ‘in’ colour for ninja-chic. Ninjas who hang out at certain gentlemen’s clubs.

Apart from the Wing Chun I only managed one training session this week. I still don’t feel right. Just the breathing thing. A minor irritation, but the rest of my performance is reliant on it. “Man can’t breathe, he can’t fight”  To quote from the life lesson that was The Karate Kid.

The recce for the Bolton Hill Marathon has been moved to next Saturday. That promises to be the wake-up call I need. The first 4 miles of the marathon (3 of which are straight uphill) and the last 2, also uphill.

I’ll try for a distance run tomorrow, hopefully the snow will have melted by then. The car’s in for it’s MOT on Monday so I’m going to try and use that to get me back on the bike for work. I only have 6 months before the Outlaw. I need to get back to swimming. Lots of swimming.  Triathlon sucks bum.

Enough of my drivel, onto the wonderful world of Twitter;

HEALTH: Nurses blamed for not being enough of them.

EDUCATION: Michael Gove to "hollow out Carol Vorderman and wear her like a flesh onesie" in bid to justify further changes to maths lessons.

FACTCHECK: Is crime really at its lowest level for 20 years, or are there just more immigrants flocking here for benefits than ever before?

BMW DRIVERS. Avoid everyone taking the mick out of your rear wheel drive car in the snow by driving everywhere backwards.

BABYSITTERS. Get kids to go to sleep early by telling them it’s Christmas tomorrow. The parents can deal with the fallout.

DAVID CAMERON. Avoid Europe being a major issue by making it a fucking enormous one

An MP (Tom Harris) wrote: So it turns out the Ministry of Sound isn’t even a proper Whitehall department! That was a waste of an FoI request. [Freedom of Information]

If the ppl of Sodom had Bushmasters w/which to defend themselves, God would be nothing more than a bloodstained sunset #GunAppreciationDay

As soon as women start making headlines for shooting their rapists the male republicans will be all for gun control. I can promise you that.

Town is full of ninja cyclists. I know they’re ninjas because they cycle in the dark without lights, reflective gear, or fear of death

Not tryin to impress anyone BUT the priest did just say I had the "body of Christ" right before he fed me a cracker. Gym has been paying off

After the BBC kids channel ‘the Tweenies’ aired an old Jimmy Savile spoof to knee-jerk hysteria:

I’m watching the Tweenies. Max is dressed up as Hitler. This could be the end for the BBC. 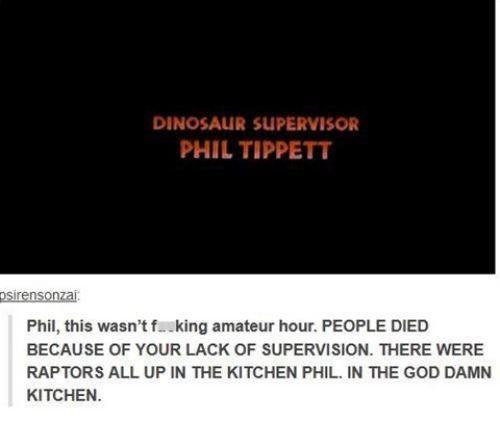 Remember that scary bit in Jurassic Park when your mother leaned over and said ‘You were adopted. And you’re not coming home with us’?

NATURE FACT: If a crow gets hungry enough it will eat its own face.

I was a smug, hipster douchebag BEFORE it was cool.

My body is a temple, but I don’t want to be entered by a priest. 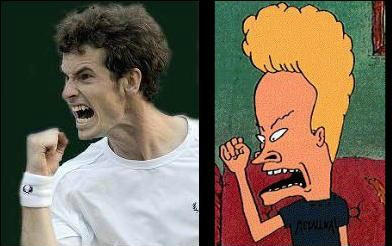 I hate that thing when Murray’s doing well we claim him as British but when he loses, we say he’s black.

Didn’t make it to the gym today. …That makes 4 years in a row now.

If we do leave Europe I hope we go somewhere warmer.

Confectionery pouch. Like a bag of sweets but made of platinum, judging by the retail value. #cinematweet 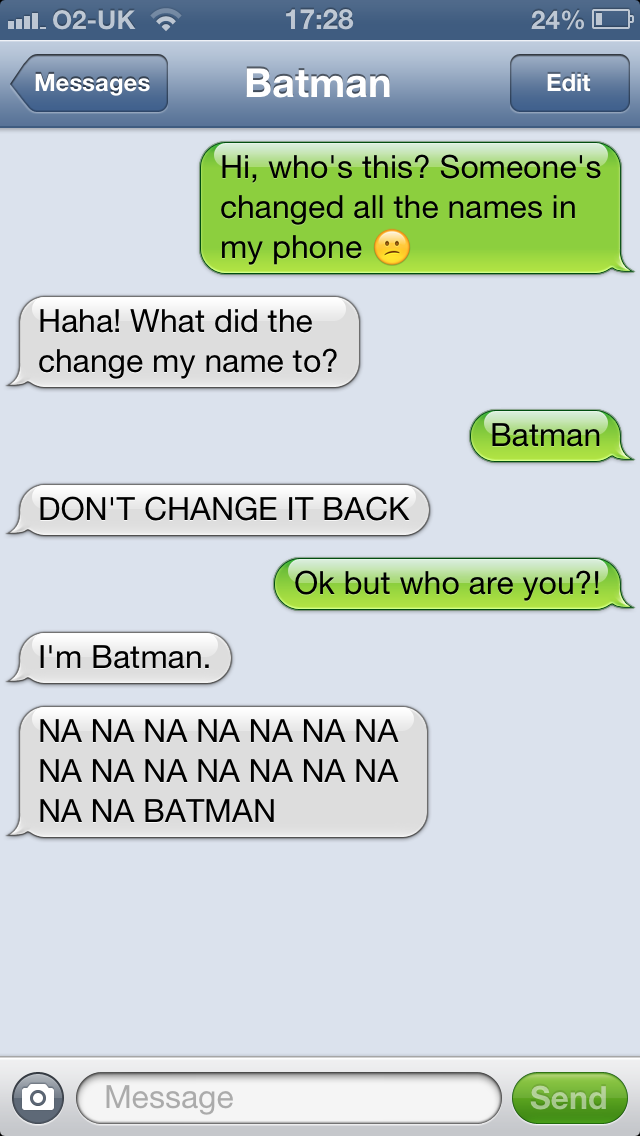 My dad said my job brings shame to the family name which is extremely upsetting because our family name is already Hess.

Oh to be this elephant..

man flu update: I drift further into darkness, nothing to be heard. a light glimmers, I fall towards it, in a moment its gone, as is hope.

We’ll cut back on snow by cutting back on gritting. Gritting has created a dependency culture.IDS”

Meryl Streep won an Oscar for impersonating a British Prime Minister. So when will David Cameron receive his?

11 govts sign for the Robin Hood bank tax. UK govt was not among them. Why? Because the UK govt and the banking industry are one & the same!

Gov Borrowing is rising and is over £7 billion higher than last year;All cuts, job shed and home loss went for ?nothing http://www.labour.org.uk/tory-economic-plan-is-hurting-and-not-working,2013-01-22 …

The day I vote Tory is the day the world can turn off the machines,dip my corpse in lime & fire residue into heart of the sun