To paraphrase the DM Reporter, WHITE BLANKET OF DEATH as ten snowflakes fall! We have been reduced to cannibalism and wearing the skins of the fallen. Society has fallen. But at least Twitter is still going.

It’s been a hectic week at work and I’ve got some non-specific malaise. I went for a run on Monday morning, all unsuspecting. I did a slow/ steep 6 minutes then put it to 6 m/m / 1%.

Usually that has me gritting my teeth by two miles, and a heart rate of about 154 bpm.

I was dying within half a mile. I tried to ignore it thinking I was being a lazy lardarse, but I just couldn’t breathe. My bpm was 170+ and rising. (160 is marginally in the red for me.) I managed 8/10ths of a mile then had to slow it right down. I still hadn’t realised there must be something wrong (I was feeling fine before I went in to the gym) so I forced out the rest of the half hour slower but on a steeper incline. Then I tried the bike. I lasted about 8 minutes before quitting. I was wheezing and dying.  I quit the gym in disgust. Then, as I was opening the door to the changing room, thought ‘bollocks!’ and went back. I set the treadmill at the fastest/ steepest pre-set programme and forced myself to do another half hour run. It was hellish.

It wasn’t until I got home and still couldn’t breathe that I realised something was amiss.

I’ve had a couple of days of feeling done-in. Oddly with a day between them feeling fine. Today it feels like I’m breathing through a thick damp cloth. And I just feel tired and useless.

I was a bit worried about how I was going to do the Helsby half marathon tomorrow, but I’ve just found out it has been cancelled due to the snow. I was planning on dosing myself up and just doing a slow run. I can’t say I’m disappointed, though. I really am not up to it.

Work has been mad busy. Last week I only got two days this week it’s back to five days/ 55 hours. On Thursday I was sat waiting for a specific trailer from 1430 until 1830, then the truck they gave me was knackered so I had to swap, I didn’t leave the yard until 1915. Then I had to drive to Crewe. Some selfish crashy bastards had blocked the M6 because there was a flake of snow so I didn’t get there until 2030, ended up setting off for Cowley (nearly 3 hours drive) at 2100. They want me there for 1830. So not pleased.

That was a 14 hour day by the time I got back. An hour commute. Six hours sleep. Which left me with a decadent three whole hours to fritter on making food and showering and such.

In a way it’s good, now is definitely the time we need some money. I’ve still not got my tax bill off the accountant but it’s due. Also the Canadians still haven’t taken the $200 out of my account, so that is pending, and I have to tax and MOT the car.

I didn’t feel like it with the cold and all. Bright side, I finally cracked that reverse in one go on Friday! Huzzah!

That was after a hell of a drive through the snow. It’s not the snow, per se, it other drivers. The truck, due to its massive tonnage, liquefies the snow so it’s just like driving through rain, albeit rain with bits of ice in it. The problem is car drivers, suddenly panicking and hitting the brakes. Twice I narrowly avoided crashing because of the flapping bastards. The trick to snow is to drive steady. No hard braking, no mad swerves. Some prick panicked and slammed on in front of me. I yanked the wheel and managed to throw it into the outside lane, just avoiding killing the fuckwit.

If the crash hadn’t killed them, me losing my job and temper certainly would have.

Anyway, snow driving is mad stressful. Though I did get to see (what I think was a BMW) in the oncoming fast lane spin out and smash into the crash barrier. That was hilarious.

In other news, after sending my TA kit back the other week I got a letter on Friday saying I am officially terminated from the TA.

Enough of my witterings, what of Twitterings? Well might you ask. It’s been a themed week. You can hardly have failed to notice the story of horsemeat being found in Tesco burgers. Twitter was all over that like a cheap rash:

well i dont want to worry you…we know theyve found the horse but has anyone found the rider?

Horsemeat in burgers served by staff on zero wages. Every Little Helps. #Tesco

A Tesco burger walks into a bar..

“A horse, a horse, my Clubcard for a horse!”

I just checked my Tesco burgers in the freezer aaannnnd they’re off….

I was in the Tesco Cafe ordering my food & the waitress asked if I wanted anything on my burger. So I had a fiver each way 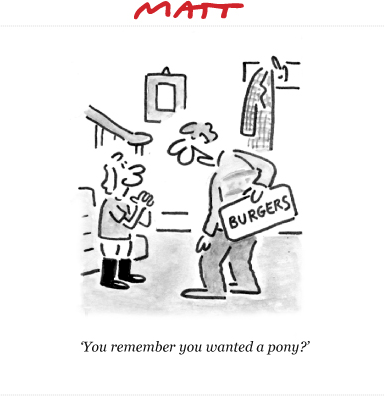 The DM Reporter was keeping us abreast;

WEATHER: ‘More photos of snow on Instagram than there are snowflakes in the sky’ say experts.

WEATHER: 10,000 feared dead as nearly 2cm of snow hits Britain, raising fears we could be facing the worst infrastructural damage since WW2.

IMMIGRATION: 29 million Romanians and Bulgarians could move here, and no-one can stop them touching your stuff.

Remember, when it’s snowed, you MUST NOT drive your car over 5-10mph, because, if you do, it will EXPLODE.

Guardian headline ‘wintry weather expected to last up to a month’. So, almost until the end of winter, then.

We lamented the demise of the Blockbuster chain;

*applauds* RT @davidcavanagh2: The thing about Blockbuster was, they just didn’t have a clue what to do.

While someone advised the BBC nature programme:

In my ornithology lab we used to refer to a large flock of birds as a ‘shitload’.

I can’t decide if this girl in Asda wearing her Pyjamas has given up on life or living it to the fullest.

I remember this one time police were violent against anti-austerity activists, and to reward their loyalty the govt cut their wages by £4000

Whilst shopping in Boots, 3yo picked up a box of tampons and shouted "DO YOU NEED SOME MORE OF THESE TO PUT UP YOUR BOTTOM?" *dies on spot*

Karen on Facebook changed her relationship status to… "It’s complicated." No, Karen. String theory is complicated. You’re just a whore.

All athletes are on drugs. Or do you think records get broken every year because we’re evolving really quickly?

Many seem to think Lance is not merely the Boy Who Cried Wolf, but the Man Who Promoted ‘Wolf – The Musical’. In a non-existent theatre.

You know of the phenomena of ‘photobombing’? Just getting in on other people’s pictures, basically. Here are a few good examples. 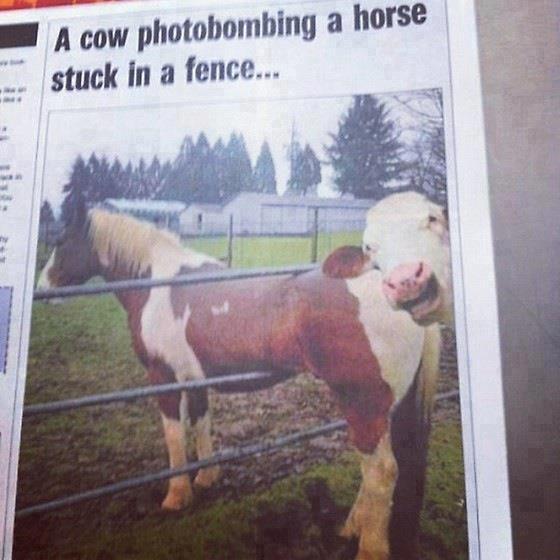 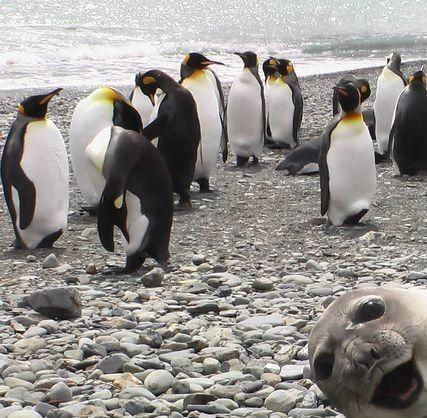