Work has sorted itself out in no time. I’ve done two weeks without being cancelled and the hours are plenty long enough. I was running up to Aspatria, top of the Lake District, doing an awkward trailer swap then running back to Crewe, trailer swap, back to Irlam. Now Aspatria have set aside a really easy drop point for my trailer. No reversing, nothing in the way, just drive in, stop and drop. Cool. Obviously the karmic balance is upset by that so to compensate Crewe are getting rid of the night shunter. This means there will be no empty trailers for me to swap with, so I have to wait an hour or so while they live tip me. Ace.

The consequence of that is I’m on a regular 50+ hour week.

Ho hum. It pays the bills.

I thought I was getting the long weekend end off. The security guard said the (Sealy beds) factory was shut for the Bank Holidays. Yay! Then work told me they were leaving two trailers loaded for me to pick up, the security guard would let me in.   🙁

Also I had fun times at work. They wanted me to run one pallet to a drop in the centre of Manchester, in an artic, “on your way”. Ace. I got ten minutes down the road, pulled up the slip road to the M60 (the Manchester ring road) in rush hour and broke down. Oops. So not good. I was stranded there an hour with no drive. If I tried to put it in gear it just rolled backwards. In the end they had to send a huge tow truck to tow the unit and trailer back to base.

Then on Thursday morning I was filling up with diesel, as you do at the end of every shift. The thing with truck diesel pumps is they have a catch on the trigger so you can click it on and leave it to fill up. You don’t have to keep pressing the trigger, it just cuts out when it’s full. Usually you wait until it clicks off, then lift the nozzle to fill the last bit pressing the trigger. On this occasion I could tell it was nearly full so I lifted the nozzle before it had clicked off. Which caused it to spray back all over me. I stunk. Not to mention the carcinogenic qualities of diesel. I put all my clothes in a bag outside the back door when I got in. I tried to soak them for an hour today and have just put them through the longest boil wash on the machine. They still stink. The whole lot has gone in the bin. Ace. Now having to boil wash an empty machine to try to get rid of the smell.

The mixed blessing continue with my ‘phone. The new, twice as powerful, battery arrived! Yay! Unfortunately it’s also (unadvertised) twice as fat. They sent me a new back case with it because it bulges out making my ‘phone twice as fat at the bottom. 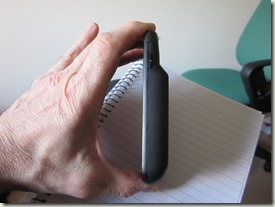 My upset is outweighed by relief though. I charged it about 20 hours ago. Since then I’ve used the MP3 player feature, kept it connected to tinterweb through 3g and wifi, I’ve had the screen on (biggest drain) for hours on Twitter and it’s still at 67%.

My old battery, (after I’d fried it, my bad!) had reduced the ‘phone to being a de facto landline. More than 10 minutes unplugged usage and it would shut down. Not a whole shitload of use for a mobilius.

I finally made an effort with some training. On Monday morning (about the only time I can) I went for a swim. First long distance swim for ages and I managed 1.46 miles in 1.03.  I was trying different strokes at the end, but I’ve just looked it up and I was wrong. Bum. However, I’ve just learned that I have my head at totally the wrong angle. I thought it made sense to be looking straight down, but apparently that sets your body up wrong and makes it harder. You should be swimming with your hairline (before I was receding *sniffs*) breaking the water. I’ll try that. Anything that makes it easier.

The weather is still too damn cold for me to be cycling to work. No goddamn way am I riding home at stupid o’clock in the morning in minus temperatures. Not happening.

I’m looking at starting my ultra running training. Looking, not doing. I reckon  a 35 mile run for starters. Do it there-and-back. That way, when you reach the 17½ mile mark you have no choice but to run the 17½ miles back. Or walk. But that is pointless. And cold.

However, as ever the fun part is in the shopping! I need a hydration pack for that 50.9 mile race I’ve entered. (Yes, the 0.9 *is* important! It bloody will be after 50 miles, anyway!) Hydration packs are like backpacks with a ‘bladder’ in them and a tube over your shoulder. Basically a bag of water and a long straw. I bought a generic one a few years back but it rubbed holes in my back. The old ‘webbing burns’ I remember with no fondness at all from the army.

This ultra recommends either lots of bottles or a hydration pack. I was leaning towards the pack as you also have to be able to carry a headtorch, waterproof coat, ibuprofen,and map and compass for the longer runs. The 100 mile runs are 24+ hour affairs. My point being, this is my first ultra but after it, if all goes not too horribly, I am looking at the Thames 100 miler. It’s therefore pointless to spend cash on something that’s not fit for purpose.  You know where this is going, don’t you? It’s a piece of kit that is supposed to be the last word in comfort and utilitarian functionality. But it costs a bloody fortune!

The blurb all sounds wonderful. Wide straps on the shoulders, padded belt to rest all the weight on the hips, secure without rubbing, ability to carry your gels and coat/torch/map/’phone etc etc. But £64, on sale, for a water bottle with pockets!

The thing with this ultra lark is you have to be pretty much self sufficient. On a 50 (.9) mile run that’s three visits to the the stash station where you can leave your kit. 15 miles, when you are pacing yourself and carrying 2 litres of water and waterproof and gels etc, could be quite a while. Especially on the last loop.  You need to have everything you need with you for that 15 miles.

You can see I’m just talking myself into filling that aching void of consumeristic want where my soul used to be.

Then I would have to actually leave the house and do a bit, I suppose.

But enough of my introspection, nobody comes here for that, let’s talk Twitter:

We start, as ever with the DMreporter:

MICHAEL GOVE: “I refuse to surrender to the Marxist teachers hell bent on destroying the profit potential of our schools.”

EASTER: God writes open letter to Lord Carey – “thanks for turning the sacrifice of my only son into an argument about gay marriage… twat!”

EDUMACATION: Just 8% of parents trust Michael Gove with reforms. In other news, 92% of parents are revealed to be Marxist Trotskyites.

Can someone tell Cameron for every 1000 council homes only 18 were given to tenants who’d lived in UK less than 5 years?

"I commend David Cameron’s speech on immigration,"said Lord Greed"as it stops people thinking my billions in a tax haven are a problem."

BREAKING: Michael Gove has been abducted by the militant Marxist group Enemies of Promise. http://www.thedailymash.co.uk/politics/gove-kidnapped-by-marxist-militants-2013032563746 …

Can right-wingers please decide whether immigrants are here to "steal our jobs" or here to "live entirely on benefits"? Can’t be both.

yes, there are about 4.7m "non-British" people living in UK, but there are at least 4.6m Brits living abroad.

I’ve just been told to have an open mind by a ukip supporter. That, Alanis Morisette, is ironic. Not that spoons and knife thing.

Tax cuts for the rich, food stamps for the poor. That’s all that needs to be said about these bastards.

I miss the days when journalists used to tackle real issues and have secret identities and sometimes be Superman.

(To which I replied: ) Re last RT, there’s your harvest #leverson. Happy now?

“Tweet your 16 year old self” was a trending hashtag, I contributed:

#tweetyour16yearoldself The robots have risen! Destroy Skynet and anything to do with Sky. Only you can save us all. Start with Murdoch.

Friends are like balloons. If you stab them, they die.

If gay marriage had been legal in 2005, I wouldn’t have had to marry a woman 🙁

Apparently some Yank biology teacher got in a world of shit for saying ‘vagina’ in class, hence:

rawstory.com/rs/2013/03/27/idaho-teacher-investigated-for-saying-vagina-during-biology-lesson/ … Yes, as we all know its anatomically correct name is "Filthy Shame-Cave of Depravity for Guilt Storage" #vagina

"we will see Christian schools attacked for refusing to admit students whose parents are gay" – Too bloody right! http://thinkprogress.org/lgbt/2013/03/26/1776861/fox-news-contributors-say-marriage-equality-would-criminalize-christianity/?mobile=nc …

"Jesus died for your sins" – the most stupid thing Christians say. The equivalent is me burning my hand on the cooker for your phone bill.

#paedobritain Is a trending topic straight from BrassEye. "WHEN DID THE BRITISH ISLES TURN INTO THE PAEDOPHILES?"

WORLD EXCLUSIVE Melanie Philips stole my Muslim transsexual baby, forcing me to eat my cat, which gave me cancer.

Lord Carey, who has a seat for life in a Parliament that also features 26 representatives of his church, says Christians are marginalised.

"I am a persecuted minority with no voice" writes man from the House of Lords on the front page of a national newspaper.

So the govt is introducing cuts that disproportionately affect the poor and disabled, and the church gets angry at them for equal marriage.

I added: I think the best way to demonstrate to Carey that equality is not persecution is to throw him in a lion enclosure. "See? Persecution!" (Then: ) In fact let’s do it anyway. Just for shit and giggles.

Carey, Christianity is the established faith, the Queen is its head, it has a place in the Lords, a palace for an HQ. You’re not persecuted

North Korea changes its Facebook relationship status with the South Korea from "It’s Complicated" to "War."

World’s scariest urinal? You can buy this at Architectural Digest show. I passed:

An exchange with a writer chick chum of mine;

‏@MhairiMcF Only Guardian could ask if you could ‘live without broccoli’ *rents clothes, falls to knees in rainstorm* BETTER TO DIE THAN BE IN THIS PAIN

Me:They may take our lives but they can NEVER TAKE OUR BROCCOLI!

Her: ‘First they took our chard, and we said nothing…’

To which I could only lamely reply: Chard is the gateway vegetable before you hit the hard stuff. Tough on broccoli, tough on the causes of broccoli.

(She won that one, very funny woman.)

FOOL people into thinking their pizza has arrived by parking outside a house in a rusty Vauxhall Corsa blasting Dubstep.

And some pictures to finish off with:

I call this one ‘anxiety attack’ *grabs paper bag/ hyperventilates* 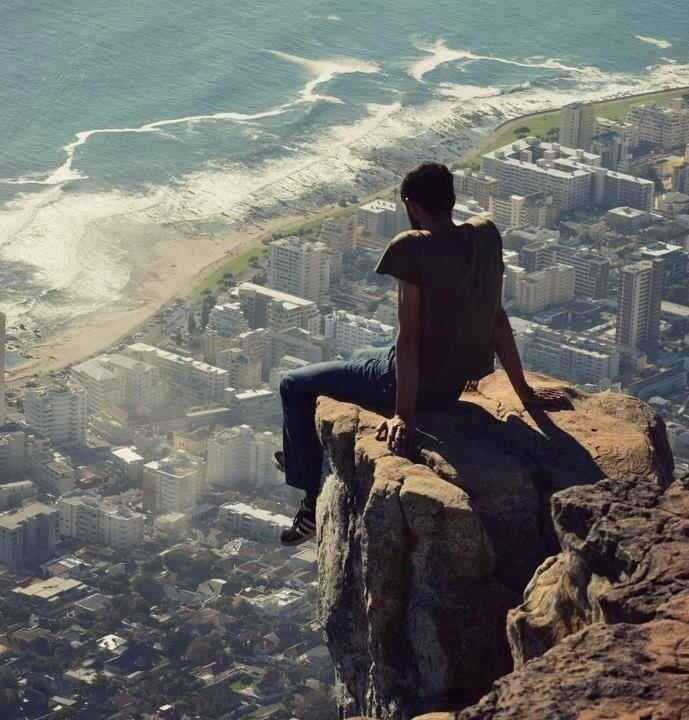 Spring in the Lake District: 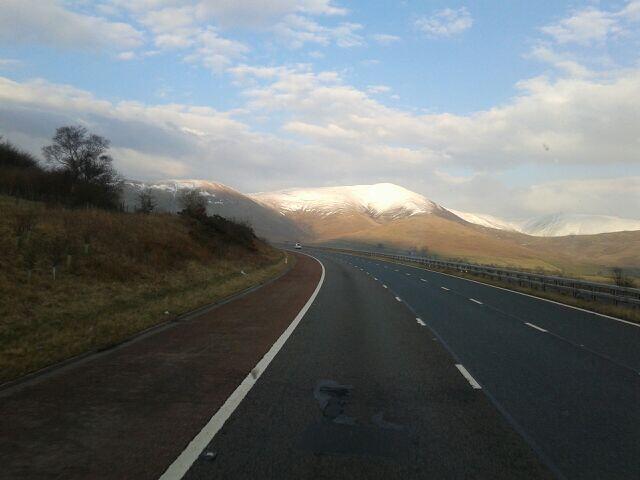 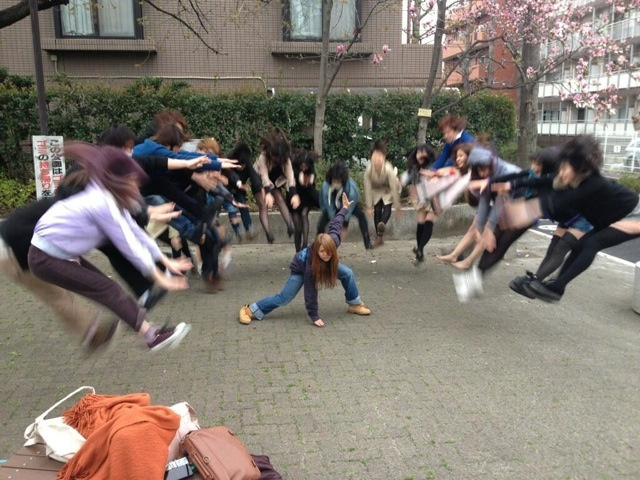 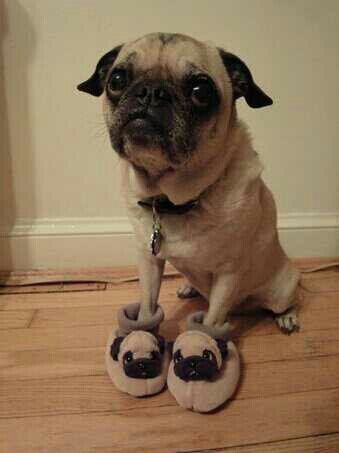 And, having completed my internetz obligation of kitten pic, I’ll say farewell.