All was ticking along nicely. I booked Friday off as Wendy’s mam was coming over on the Wednesday to stay with us so I thought I’d take a long weekend.

I had that low-ness a few weeks ago where I felt washed out but I’ve not really had a cold all of this interminable Winter. I woke up on Tuesday morning with a massively dry throat and a blocked nose and thought nothing of it. Woke up on Wednesday after three hours sleep with my nose running and eyes streaming, and couldn’t get back to sleep so I had to ‘phone in sick. You can’t drive until stupid o’clock in the morning if you’ve only had three hours sleep, it would be too dangerous. Then the cold really hit and I felt lousy with it as well, so I was glad I ‘phoned in. Just in time for Wendy’s mam to get here. So that was a great way to say “Welcome to England!”

I was just starting to feel like I might survive the cold on Friday when I got a call from the agency. I’ve been sacked off. The run I’ve been doing (out of the Irlam base) has been moved to Crewe so there’s no job for me.

Not a great week, all in all. Still not done any training, poorly ill, and now unemployed. Skiving not Striving, according to Cameron. Not that I can skive, apparently I’m not entitled to dole as I was self-employed. Ace.

It’s not as bad as it sounds. There are plenty of agency jobs out there, it’s just I was settled into that one. It was well within my comfort zone. Now I have to be nervous again. Bah!

I’ll try for that Hermes job again. Some agency were advertising it but only for three days a week. If I get in at that I’ll see what happens. They might bump me up to full time quickly or I could work the odd day here and there for other agencies.

I’m still snuffly. I had a text from one agency on Friday saying they had a shift going but I’m going to wait until Monday when hopefully I’ll be better.

In other news, the moggy pulled through. *ambivalent face*

She’s like a different cat. (Hmm, I wonder if Wendy checked?) The poor bugger must have been really suffering before. She’s had all of her manky teeth yanked out and bit’s chopped out of her gob. She no longer smells, she’s started piling into her food and is grooming herself again. We thought she’d given up on the latter because she was old and too stiff, it must have been because her mouth was hurting her too much. Poor thing.  She’s all active and friendly now. She even seems to think I like her. Fool of a cat.

Can’t be doing with her but I don’t like to think of her suffering all that time. She stank when Wendy took her in, we just thought that was her natural rancid smell.

This week on Twitter has had a bit of a theme. Can you guess what it was?

It has tickled me no end that there are three versions of Ding Dong (the witch is dead) and this week they are numbers 1, 18 and 30 in the charts. That is a beautiful thing.

Lets start, as is traditional, with the DMreporter. They ran a hashtag game of satirical tweets; #banbenefits it was funny but  near to the knuckle. There was only a fag paper between the satire and the real Daily Mail.

Ex-soldier near me gets top of range false legs & premium parking space. Does that stop him screaming at night? No! #banbenefits

I’ve spoken to literally some people. They all agree. Benefits cause cancer, aids and socialism. Canaidism #banbenefits

#banbenefits My wifes 4×4 mumtruck has to park 20 metres from Asda entrance, while the weak and deformed get prime parking

my neighbour has cleverly decided to have a ‘disabled’ child. Kerching! #banbenefits

IN MEMORY: There will be a 2 minute cheer at 11am to mark the passing of Baroness Thatcher. Please spread the word and observe #2minutecheer

PROFILE: Glenda Jackson – MP for just 20 years and only two Oscars…? Who is this no-name failure wannabe, grasping for the air of publicity?

QUENTIN LETTS: “The lefts use of democracy and appropriate methods of advancement to infiltrate our society shows how evil they really are.”

(Which I didn’t think was funny until they revealed it was an actual Daily Fail headline!)

The majority of this week will be devoted to Politics/ Tory scum, obviously:

I contributed: “To steal from Wilde, a chap would have to have a heart of stone to read of the death of Maggie and not laugh.” And “The White Witch is dead, the snows are melting as Spring returns to the land. I’m keeping my eyes open for Aslan.”

Thatcher’s policy on homosexuals was to shame and eradicate them. Her policy advisors called for concentration camps for people with AIDS.

This week I learned that blaming six kids’ deaths on the welfare state is "legitimate", but celebrating Thatcher’s death is HORRIBLE

Margaret Thatcher’s greatest achievement is that she is still Prime Minister.

Those celebrating Thatcher’s death are very crass. Let us not forget she was a mother, a grandmother and somebodies living embodiment of evil

All readings at #Thatcher‘s memorial service will be read out in Parseltongue. 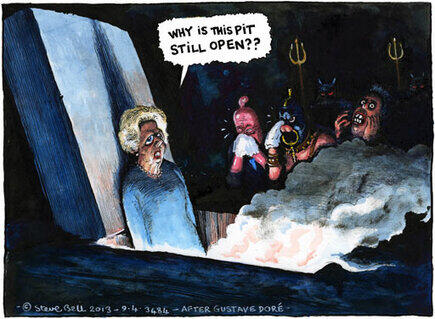 Thatcher’s only been in hell for 20 minutes and she’s already closed down 3 of their furnaces. #Thatchersisdead

(BTW, that hashtag caused some confusion abroad as people though Cher had died!)

Love him or hate him, Hitler was a conviction politician.

I think it would be a really nice touch if today, in remembrance of Thatcher, you joined your Union.

Wow, this #Thatcher they’re describing sounds #amazing. I wonder if she was #related to the one who #ruined #Britain in the 1980s.

If You do not want People to Say Bad things about you when you Die, Do Not do Bad things to People when you are Alive.

In the end, all a person can do is try to live their life in such a way that it doesn’t require 700 armed guards to protect their coffin.

"what’s the difference between Thatcher and Cameron? Hopefully about a couple of weeks"

Kind of comforting, actually. If #DingDong can cause this much panic, what would a bucket of water do? #melting

Like Muppet/politician lookalikes? Well, this is the best you’ll ever see! 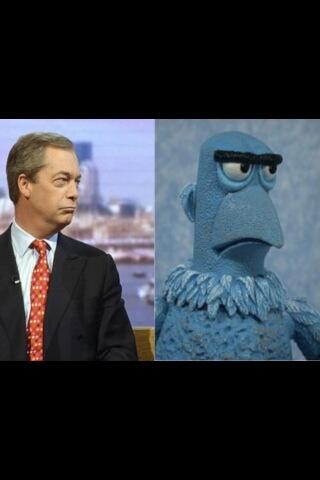 I hope Thatcher never dies again. It’s getting right on my tits now.

Reminder that 85% of the residents of Grantham voted against erecting a statue of Thatcher in the town.

The rights to (and profits from) "Ding dong the witch is dead" belong to Fox. Which is owned by Rupert Murdoch. Now that, Alanis, is irony.

Reasons why my gran is ace 2546: she just told me how pissed she got to celebrate thatcher’s death. She is 87

"if you ignore what he stood for, Bin Laden is definitely a role model for young men globally".

Someone said: If the Beeb don’t play ‘Ding dong’ will those of you who are living in denial finally admit the UK has gone full on fascist & DO SOMETHING?

To which I replied:

It will be like The Glorious Workers Revolution we had when they banned ‘God Save The Queen’, by the Pistols. (And)

And who can forget that misguided summer of love when everyone joined a commune for a love-in when they banned ‘Relax’, by Frankie? 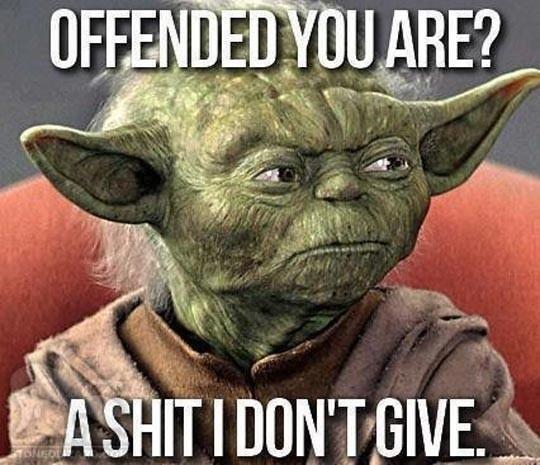 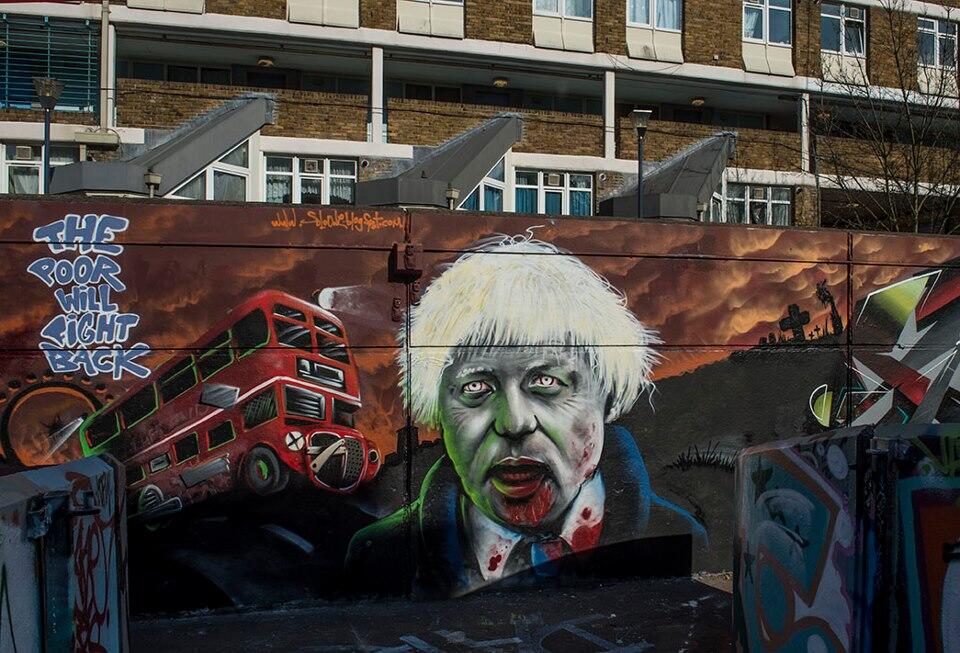 When Michael Foot was in charge of a nuclear disarmament committee, The Times headline read "Foot Heads Arms Body."

(That young girl got sacked for some offensive tweets when she was 13 / 14 years old leading to this: ) Resign! > Kent Youth Commissioner Paris Brown admits pushing toddler over in soft play area when she was 2.

(Some optimism from this week’s @Sweden: ) The best thing about living alone in Sweden in the winter is knowing the body won’t rot as quickly if you choke on something and die.

New Parent Idea: 1. Take pictures of you pulling baby out of spacecraft in forest. 2. Hide pictures in attic for kid to find when he’s 10.

What kind of idiot forgets to bring his semi-auto to a Texas school massacre? He killed No one! Hates LIBERTY!!!

I noted: Nutter goes on rampage in US school *without* a gun. 21 attacked. No deaths. If only there was some sort of lesson to be learned #nra

Just seen a fat butterfly, coughing and wheezing and trying to haul his fat arse off the ground. Broken Britain.

There are some right evil bastards in the world: 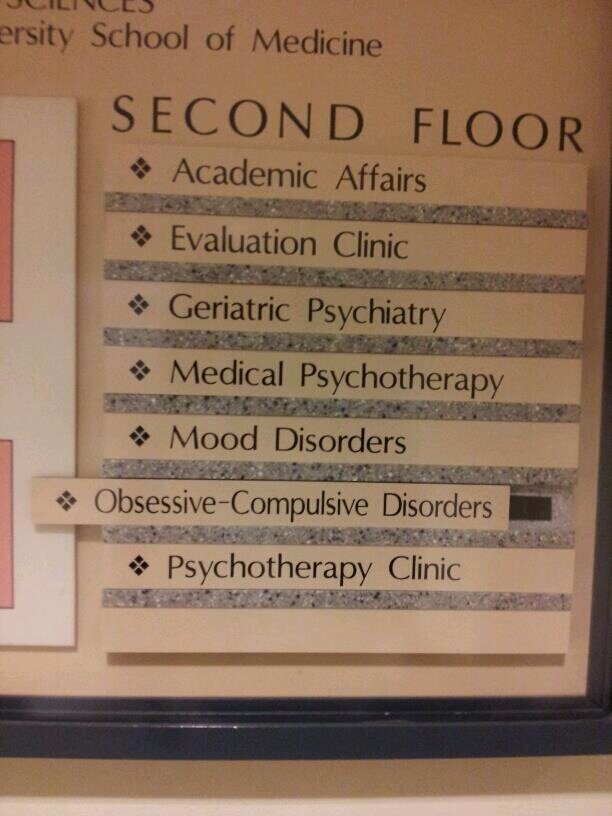 Roughly what time is the heatwave starting? Just wondering whether I should bother scraping the ice off the car. #heatwave”

Yes, a GOP Congressman actually said: ‘If babies had guns they wouldn’t be aborted’ http://thkpr.gs/10ZeGgi #icymi

"What d’you mean by class?" "Well, it’s like trains. Some people have reserved seats, the rest stand in the puddle of piss outside the loo."

If I can’t wish for more wishes, my first wish is for more genies. Don’t try and out-loophole me, you lamp-dwelling twats.

And I had a bit of whimsy:

Random thought 2, How do Cockneys ask for oranges?

Spare a thought for the Cockneys this morning. Unable to order oranges, weak from vitamin C deficiency, flopped over their barrows.

"Who will buy my lovely violets?" They croak. (Probably means something about pilots.)Then die from rickets. #prayforcockneys

In hindsight, adding "get your shit together" to my to do list might not have been specific enough.

Death is just nature’s way of telling you that your life was a complete waste of time.

And on that note, toodles.