I’m sat here replete with Chinese and pants undone. Sorry for that mental image. My guts are actually uncomfortable I’m getting that fat again.

Sounds like someone is firing off a shotgun. That’s outside, not my guts. Just thought I’d live blog it in case it turns out to be a bunch of murders.

Anyway, assuming some mofo doesn’t pop a cap in my ass in the badass ghetto that is Great Sankey, I’ll carry on moaning about my fatitude.

Not good. After the diesel drenching and consequent clothes binning last week I went and bought some more trousers. I’d lost a lot of weight so I bought 32”, thinking that would be comfortably slack for the driving. They were well tight, and that’s the “Of course you’re a 32, and a svelte one at that” lying-to-your-face Asda size 32. Oh dear. So that means I’m bulging out of a pair of 34” trousers. Like the Stay-Puff dough boy in Ghostbusters. If he’d been wearing trousers. That were too small for his doughy lardarse. Not the best of similes.

About the diesel thing, a chum on twitter said I should have dried them out and seen how they burned instead of binning them, she said it was her first thought. I replied my first thoughts were “Gosh darn it!” and “Hmm, what’s that heady perfume so redolent of carcinogens?”

But back to the lard; Must. Stop. Pigging!

To add to the dilemma, that running backpack/ water bottle/bladder holder is a designed to be a snug fit. It has to be as movement is what causes friction and thus webbing burns. Nobody wants webbing burns. Your skin gets rubbed off at the same time as you get bruised from the bouncing action. The worst part is getting it on the small of your back. You think you are just stiff and bruised because you can’t see it. And then you get in the shower. That is an experience you never forget.

Anyway, snug. So they have a fitting chart of height and weight. If I’m going to be running the distances I’m after I’ll be quite lean, so I want a medium pack for my height. Unfortunately I’m currently lardy (nearly a stone and a half overweight) which puts me firmly in the large category. If I buy a large it won’t fit me by the time it comes to the race, if I wait until it fits me I won’t be used to running in a pack.

In other news, Little Cat has been turning her smelly little nose up at her food lately. Then she started trying to eat then making whining sounds and leaving it. Wendy got worried so she took her to the vets. You’ll remember this is a stray that used to sit on our windowsill and beg food. Not a cat we got. One that imposed its rank, bad tempered self upon us. Anyway the vet said she has manky teeth and a growth under her tongue. She’s going in on Monday to get sorted, £250 -£350, ballpark figure. Wendy’s currently got her on suicide watch in case she throws herself under the wheels of my car. Several times.

In desperately sad news, I heard on Twitter this week that Iain M Banks, my favourite sci-fi author went to the doctors with a bit of back pain, they ran some tests and it turns out he’s got bad cancer that’s already spread around his organs and they don’t think he’ll last a year. Imagine that. Going to the quacks with a bad back and them telling you you’re going to be dead in a year. He’s 59 years old and was in fine fettle. Poor bastard. Obviously I’m a bit gutted for me but, bigger picture, for him. It’s like when Peter Sellers died, I was only a kid and didn’t know him, but I loved his work so much I felt a personal loss. He’s a vocal Humanist as well, so he has no fluffy afterlife to soften the blow. It was from his books I got the quote “We come from, and go to, nothing. A lack like shadow that throws the sum of life into sharp relief.”  We have the logical comfort that although we cease to exist, which is terrifying, we won’t know about it. Better a bitter truth than a comforting lie. Or not. Whatever.

Well, the pointlessness of existence, the futility of life in the face of the inevitable and the vanity of hope when faced with oblivion. Sound. To paraphrase Bill Bailey, that puts this blog into some sort of perspective.  It may be a waste of pixels but we’re all going to die, so what the fuck?

While we are all still here though, we might as well point and laugh at the crazy world of Twitter.

We start, as is custom, with the DMreporter:

WEATHER: Cold snap to last until May after George Osborne admits to selling Spring to the Germans.

IMMIGRATION: Theresa May admits she wouldn’t hesitate to extradite Jesus as a Middle East cleric who “won’t be tortured” .

EDITORIAL: ‘We can write what we like with impunity, and if you suggest a watchdog to monitor basic decency we’ll call you a socialist.’

BENEFITS: Government announces that those receiving state support or tax credits are to wear a yellow star in public.

GRAND NATIONAL: First female jockey fails to win race. Does this signal the end of women in the sport?

18 out of 29 [millionaire] cabinet ministers get a £42,000 tax cut tomorrow. The same day the #bedroomtax begins.#workfare "We,re all in this together"

Ian Duncan Smith (IDS) said he could live on £53 a week dole. Immediately there was an online petition started to get him to prove it. He refused saying it was a stunt. Hence;

No, IDS, thats not £53 plus food, 1st class travel, second home, duckhouse, moat and a doss job for a relative expenses. Its ALL YOU GET.

"I could and have lived in a big pit of bears and wolves and lions. I have no problems forcing poor people to do this for sport." – IDS

Iain Duncan Smith Says He Could Live on £53 a Week? His Lunch Cost More than That

Sure Iain Duncan Smith could live on £53 a week. But who would pay him that much?

Former Tory MP Edwina Currie says SHE could live on £53 a week. Asked her to talk to @5_News about it, she wanted 500 quid

The Cabinet stood, hands clasped, atop Westminster Palace intoning "SNOW, SNOW FOREVER ON THE UNDESERVING POOR, SPRING IS NO MORE"

"In its last year before privatisation, our railways required just £431m in public subsidy. By 2006 the figure had reached over £6bn" #maths

I’m with Osborne, naive to think benefit levels don’t factor in that calculation we all make everyday on whether or not to kill our kids.

If more Tories were like Alex Massie, I wouldn’t advocate legislation allowing hunting them with dogs for sport quite so ferociously.

You’d think, given the 140 character limit imposed by twitter on tweets it would be impossible to sum up the whole of the IDS affair and offer a reasoned critique of it. I flatter myself I proved otherwise:

“I can live on £53=claim. Go on then= challenge. It’s a stunt=cowardice. IDS is a cunning stunt= Spoonerism.”

The real Daily Mail ran this about the killing of six kids; 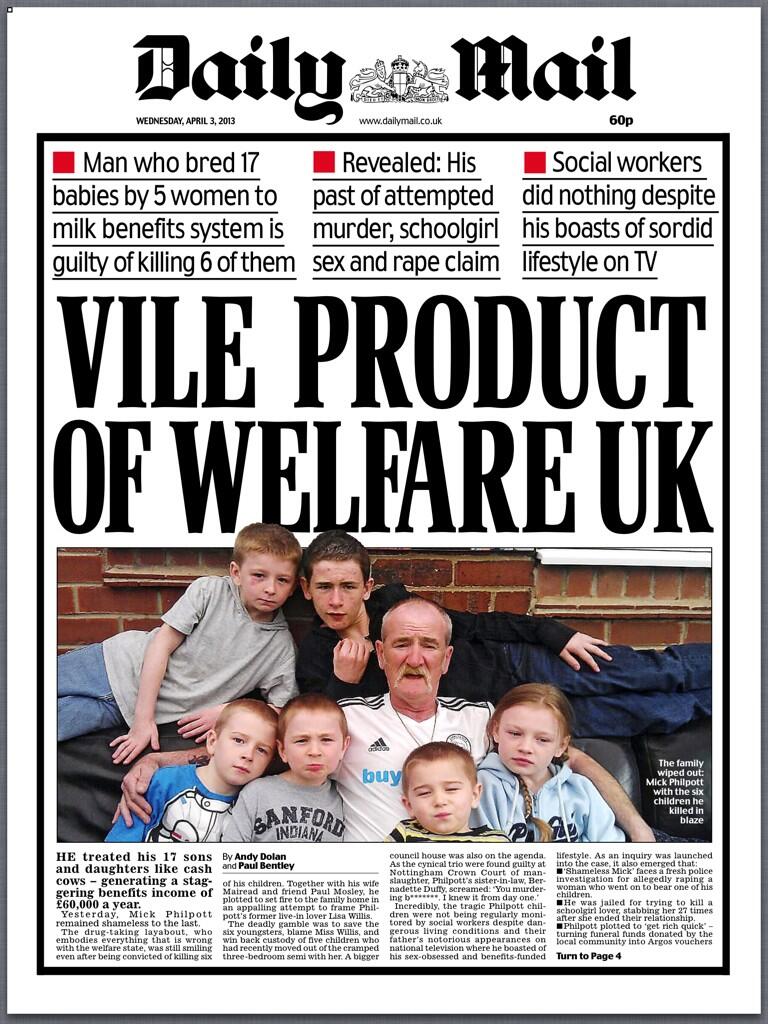 Do you think the Mail is aware it’s just effectively called six dead children ‘vile products’, or does it just not give a shit?

The rich have babies. The poor ‘breed’. We’re no more than dogs to these people. Except they’d feed a starving dog.

Mick Philpott no more sums up people on welfare than Lord Lucan does the wealthy. Those poor dead children. Shame on you Daily Mail.

How long until certain papers are asking the govnmt, on behalf of ‘hard working families’, for a ‘final solution’ to the ‘welfare problem’?

What if Iain Duncan Smith lives on £53 a week and then goes on a killing spree? What then? SEE WHAT YOU’VE DONE WITH YOUR BLOODY PETITION???

I don’t about you, but when my nan claims winter fuel allowance, I often think "you’re capable of murdering your family".

Does anyone have a copy of the infamous Daily Mail front page where they used the Fred West trial to denounce all self-employed builders?

Dear Daily Mail, When will you be running your front page about JK Rowling: Super Awesome Product of Welfare UK? Regards, M. Cox

#WhatsYourClass Should have a box called "Do you often agree with the Daily Mail?" which, if clicked, forwards you to the Dignitas website.

I notice Daily Mail didn’t cover Seddon’s murder of his parents for inheritance cash as "PRODUCT OF FREE MARKET CAPITALISM UK". Odd that.

Remember when Harold Shipman killed several hundred people on purpose and we debated whether that means all middle class people are evil?

Funny, right-wingers have abandoned the view that blame for crime is about personal responsibility, rather than their circumstances.

….only a couple of years ago Right said poverty and deprivation had nothing to do with London Riots; was just about individual criminality

Should we abolish House of Lords cos Lord Lucan’s crimes were facilitated by his hereditary peerage (cash, network etc)?

Millionaire Christopher Foster killed his wife, his child, his horses, his dogs, then torched his mansion. Vile product of fat cat Britain?

Sending Philpott to jail will cost more than sending him to Eton, but does at least have a better chance of turning him in to a decent human

I saw a man (around 60?!) in Waitrose earlier who was standing next to the newspapers for ages tutting at everyone who bought the Daily Mail

I thought the last tweet was brilliant. ‘Sticking it to the man’, Brit style. Stood there tutting. Hilarious.

So my Easter eggs haven’t hatched, and my incubator is fucking ruined.

The boat race attracted some tweetage:

Sixteen knobs in canoes. Couldn’t give less of a fuck.

The *Marines* are guarding the boat race from any oiky protesters. The frickin’ MARINES.

IMAGINE the trash talk that goes on between Oxford & Cambridge "I say. I heard your mum once went to Wolverhampton" "You take that BACK SIR"

My heart says Oxford but my head says Cambridge #boatrace [to which I added]  <<My very soul cries out "RELEASE THE KRAKEN!"

Funny how British people who live abroad are expatriates, while foreigners who live in Britain are immigrants.

It gets worse 🙁 Daily Heil: "Website that charges £19 for ‘tips’ on how to milk disabled benefits system"

Iowa man shoots pistol at a tree..Tree falls on him. He’s expected to recover. ** Yep! Another tree attack foiled by a gun owner. #NRA

I can hear a jack-booted army in the distance marching towards the town. Yikes. Oh no,.. wait, it’s the packet of tictacs in my pocket. Phew

There is no god. It’s a clerical error

BBC reports that Goths are to get hate crime protection. "Too little too late" responds Chieftain Fritigern, in a statement dated 378.

Grand National day tomorrow. I have no television so I intend to recreate it by throwing lasagnes over my neighbours fence.

The only thing more exciting than horse-racing is everything else.

Convince your dog its in the Grand National by taking it for a nice run in the park before shooting it in the face.

Asked to come up with some menu ideas for a vegan coeliac with a nut allergy. So far all I’ve got is ‘false tooth with a cyanide pill in it’

FOLDING FITTED SHEETS: 1) pair up adjacent corner seams 2) wad the entire thing up in a big ball 3) who cares this is impossible 4) bourbon

And finally, we can shut the internet down after this, it has peaked:

Sorry if that was too much. It’s been a stressful week for a Lefty.