It’s been tweaking of the norm at work. I was getting in for 1500hrs, sitting around for 30- 90 minutes for that jobsworth I’ve been sharing a unit (truck) with to get back then trotting off up to the Scottish border, doing a trailer swap and then back to Crewe. This takes until about 2330hrs. Then on Tuesday the guy at Crewe went on one. “You’re supposed to be here by 8 o’clock! Now we’ve missed the connection for the next driver” etc, etc. I let him rant a bit then told him that was a good run. I couldn’t get there much faster. If he wanted an earlier delivery I’d have to start earlier. “It’s not rocket science.”

That went down well.

I put my ‘phone on silent when I go to bed otherwise I get random tweets and emails waking me up. On Wednesday I got up at 1210, had a quick shower, turned the volume back on on my ‘phone and saw I had two missed calls and a text. From the agency. Start at 1300hrs from today.

The change of times means I can get back to Crewe for 2115. Not what they want but near enough to stop them whining.

The great things about the change are; not having to sit around waiting for Bill to get back, not having to talk to the brain-donor security guard at Aspatria and a more reasonable finish time. I can get to bed by 0100.

The downside is as it’s a straight run with no waiting around now I’m only averaging about 9 hours 15 minutes (paid) a day. This is piss-poor in the lorry driving world.

Then they were desperate for drivers at Iceland this weekend. So after a full week at Ceva I went in today (Saturday). It’s not so much the money (which, let’s face it, never goes amiss) but the fact that I want to keep my foot in the door there.

They sent me out with a 9 metre trailer. Titchy. To Ashton. I noticed it was marked as a “RED ROUTE”. This did not inspire joy. They have some awkward bastard stores as it is, which aren’t marked as red route. Hence this had to be bad. It was. I had to drive an (admittedly relatively small) artic through a pedestrianized zone in a town centre, then reverse in a tiny street on to the bay.

I managed it after a couple of attempts. It was that tight that I took up all the road and I still wasn’t straight. ie, my unit wasn’t in line with my trailer. I asked the guy who worked there and he said that wouldn’t do, I had to back it in and leave my unit at a right angle to my my trailer. I was less than chuffed. In the end I had to get it like this: 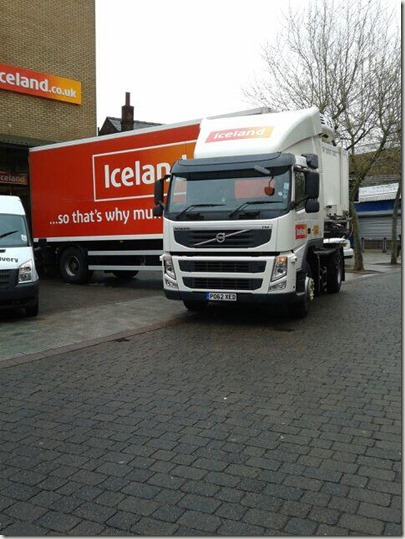 It was totally weird. You never set up the trailer to leave the cab like that, so I was having to work out how to get the trailer on while at the same time leave the unit skewed. Odd.

I have started riding in to work. I’ve drastically reduced my kit and manage to get everything in that fancy arse saddlebag thing I bought last year. This means nothing on my back. Yay!

It’s jam packed though, so I only pack my waterproof coat (no room for leggings). It’s been pleasantly warm so I’ve been going in my shorts. Obviously it has pissed down most nights. But of course.

I finally gave up on conventional wisdom this week. The received wisdom is you pedal at 90 rpm and choose the gear that lets you do that. Supposedly you do it in higher gears as your muscles develop.

I’ve been doing it like that since I got back on a bike (3 years ago?) and I’m still changing down to mid range gears over tiny hills just to keep up the cadence. Then I thought back to my teens (when I had calves of granite) and I didn’t know about this new-fangled philosophy. I just stuck it in top gear and went like stink.

I’m fairly certain it’s a body-builder truism that you use light weights, repeatedly, for muscle definition, heavy weights for muscle building. Anyway, I’m in 10th gear (it’s actually about 14th gear nowadays, but to me 12 tooth/ 52 tooth will always be 10th gear)  all the way now. And I’m adjusting my saddle back up the height I think it should be at. Screw this cramped position, I’m going to have a full pedal swing of power.

Yeah, that’s me sticking it to the man.

Wendy has been to see Star Trek this week and loved it. I’ll wait till it comes out on DVD. However, I did watch Doctor Who. Utterly awesome. And it’s about time. The whole of this series has been sacrificed to set up that (admittedly epic) episode. It seems to support my contention that what is wrong with this series is Clara. River Song makes an appearance and the show is sublime again. It does cast Amy Pond in a good light though. Clara is pretty (as was Amy) but is so much less than engaging. So it wasn’t just her looks that made the (Amy) character, is what I’m saying. I’m sure that could have been expressed more eloquently.

My Snooper trucknav arrived. That is one hell of a bit of kit. It kicks the crap out of the Tomtom. I only got to use it yesterday for Iceland, but it really does the job. I’m prepared. Bring it on!

Oh, I had my HGV medical renewal form returned to me, which was nice. £88 for the doctor to tick the boxes on a form and she’d missed out five of them. Ace. She’s not in until tomorrow, hopefully she can just do the five ticks and give me the form back. I don’t want to have to wait for another appointment. Or pay again.

The only other thing is I’ve switched diets. I can’t bear that meat one. I’m just having 50g of rice and homemade curry for breakfast/ dinner the same for my packed lunch and a small bowl of cereal when I get in from work. With the cycling it is working, slowly. It’s better slow than not at all. I can only last days on that meat one then I have to eat something.

AWARDS: Fury over new BAFTA category – ‘Best Performance by an Actor Currently Charged or on Bail for Sex Offences.’ #BAFTAS

BAFTAS: Whose boobs nearly fell out and whose didn’t? A sensitive pictorial essay.

SCANDAL: Fury as BBC admit to knowing the iPlayer caused cancer as far back as 1987.

IMMIGRANT HELLHOLE: A spokesman for Migrationwatch said ‘every time a foreigner moves to Britain a puppy dies.’

EDUMACATION: Michael Gove receives vote of no confidence from humanity.

If it is a ‘spare room subsidy’ where is the corresponding ‘overcrowding payout’?

Tell inquisitive children that a same-sex kiss is what happens when people become too reliant on the state.

A gang of toffs calling each other daft names dominates BBC news, selling off your NHS to same gang of toffs and not a mention #bbccomplicit

The EU, UKIP, his own backbenchers or the electorate? I’m not sure who Cameron’s fighting, but I do know he’s not winning.

English chums, be clear Farage’s debagging was nothing to do with nationalism. It’s a cross party affair. EVERYBODY thinks he’s a bawbag.

Tory association heads say support for gay marriage has cost them next election, may I point out you haven’t won one since 1992

A 3D printer that can make guns? Pffft, that’s nothing! I’ve had a Canon printer for years.

Referendum: Should this government leave the UK? A: Yes.

Scientists say people who drink daily reduce their risk of heart attack. As for livers, scientists said "fuck livers" and then high-fived.

First kebab was invented in 1994, when an emo lamb set himself alight when hearing Kurt Coban had died. The result was tragic/delicious.

I have made up a joke. Question: How many UKIPs does it take to change a lightbulb? Answer: Fuck off UKIP.

Oh jesus. Someone has burgled my house and all they took was that cup of tea I just made for mysel- Ah no, there it is. Never mind.

Amazon made more money from government grants than it paid in tax last year – http://ow.ly/1Wf1xW #corporatewelfare

That awful time I was in Berlin, marching along, repeatedly pointing at a bird shouting "Seagull! Seagull!" while sniffing my toothbrush 🙁

I had a bad moment: "*L/h/s chest pain* FUCK! HEART ATTACK! Me, triathlete, heart of an ox. Irony. Who will tell twitter I’ve died? *burp* oh. As you were.

This prostitute song is good. It’s like the Oompa Loompa Sex March. <<#LesMis

That’s your lot. I just don’t get time to browse everyone’s tweets anymore. What is Amnesty International’s twitter handle?