I had a bad to-do this week. I was tootling down the motorway, avoiding killing the usual eejits, when I saw a hippy van, (a Volkswagen camper van) with a beardy-weirdy 20-something driving, a passenger, and another beardy-weirdy lounging in the back.

I was instantly struck by a vast longing to be that hippie. It was the hippie dream, three people in a VW camper van, off to the sun and  a peace-out session. I was struck by simultaneous desire to be living the dream and a overwhelming feeling that the last 7 years of sobriety were an utter mistake.

I can’t say that I’m over it even now. I realise that that isn’t the case though. You still get  up in the morning and go to work, there are no proper hippie communes and damn few real hippies. It’s just living your life with a drug problem.

But, god, the dream!

It’s just nostalgia for a lost youth and a yearning for what should be, no more achievable than joining Gandalf for a quest, or becoming a knight of Camelot, but sometimes rationalization means bugger all.

It was so bad that for days I was thinking of non-driving jobs I could do in Cornwall so I could become a wreck-head hippie. It can’t happen. I have to think of Wendy, if nothing else. Still, it’s been a trying week.

In other news, my garden is coming together again quite nicely. I had that year or so when I barely touched it so it all went to wrack and ruin. I’m slowly reclaiming it from the grass. Bloody weed it is. I have one big patch at the bottom of the garden that is still grass infested. I was waiting for the nice early crop of strawberries then I was going to lift the strawberry plants and turn the lot over. Ha! Winter lasted until a few weeks ago so the strawbs are still ripening. Ho hum. Patience is a virtue.

I will put some pictures up in a minute, having some technical difficulties here. ie, my camera battery is as flat a fluke and my ‘phone is saying the SD card is full. Charging the former and transferring the files I want to keep off the latter before wiping it.

Anyway, I went to the garden centre yesterday to get a bit of cover for the raised bed. I had already planted some bulbs and baby plants there but the thousands of local cats (that Wendy feeds, grrrr) have literally shit on that attempt. So I went to get some cheap bedding plants. £46 pounds later I got some. Oops.

I saw this lovely white rambling rose. Heavily scented covers 20’ x20’. I had to get it. I’ve put it up by the shed, I’m going to train it over the whole thing. If that works it’s going to be ace. Also, when it’s established, I’ll take some cuttings and cover the fence. That should make all the reds in the garden really jump out.

The main thing is that I have an interest again. I can work it over bit by bit as long as I’m interested. Before I was actively avoiding it.

Which brings me neatly to my training.

I have done myself a mischief with forcing those runs on tight tendons. I’ve not been for a run since, but just doing stupid things like pulling a container at work and my calves are on fire. Also, my pushbike. I took it in to the shop last week for a full service because the spokes had snapped and I thought I might as well do the whole thing while I was there. The guy is very good (he qualified in a local Ironman and got through to the world finals in Hawaii! Impressive.) but he’s also surprisingly busy for a bike shop. He obviously forgot what the bike was in for so he just replaced the spokes and sorted the remaining ones. £5. Mustn’t grumble about the cost, usually it’s the opposite. “I know all you asked for was a windscreen wiper, but we found we had to replace the engine to do it. That’s £10, 000 please.”

But, goddam it! As if I don’t have enough to worry about, not being in any way prepared for the big race, now I have to worry about the bike. Also, in a moment of weakness I was flustered into buying that dear running rucksack/ water carrier. It’s actually the less dear one. I went on the site and they had sold out of that one, in a panic I looked for the it elsewhere. In doing so I came across a reviewer saying the new one had issues with the water bottles bouncing and on the Paris de Sables (the 4 day, 100 mile run across the Sahara Desert, carrying all your supplies) the guy who’s name is on the bags wasn’t even using them. I was recommended the older, cheaper one, but naturally assumed that newer and dearer is better. It would seem that it is not. So I got the older bag before that sells out. And a water bladder.

Anyway, here are a few pictures;

Moved the acer, planted two baby acers there until they grow too big, and for summer colour some coleus. In the box hedge I’ve put in some plants for colour and those ones with the white flowers are supposed to spread out so eventually it will be a circle of them in box, with trees sprouting from them. 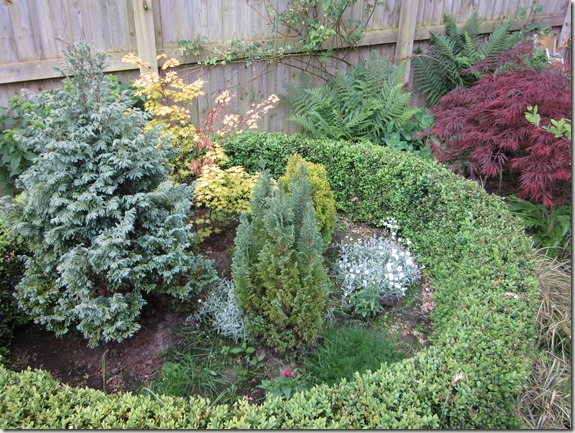 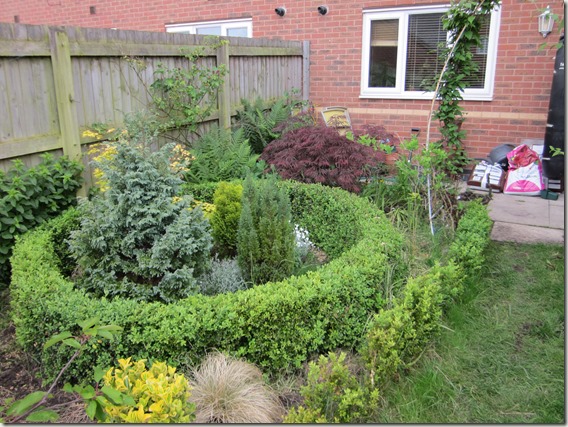 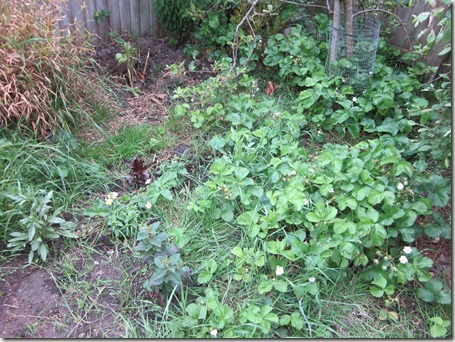 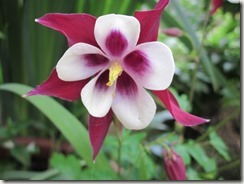 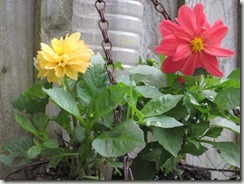 While I was waiting for my camera battery to charge I went out for a trial run. I did 14 miles at a steady (slow) pace, I was thinking I’d cracked it, I got to within ½ a mile of home and my calf seized. My tendons are just as loose as ever they were, I think it is the muscle that contracts with cycling. I’ll google it in a minute.

3 Weeks left until the race and I’m hobbling again. *sigh* The one good thing about it, was I passed the guy from the bike shop whilst I was running back. We crossed paths, as in. He was cycling one way, I was running the other. He qualified for Kona, Hawaii, I doubt I’d ever pass him. Anyway, I was still trotting along then, so I saved myself some embarrassment there.

In some good news, I managed to upgrade my Operating System on my ‘phone and didn’t even kill it! Go Me! Of course I did accidentally wipe all my data off the ‘phone whilst doing it, but you can’t make an omelette without breaking wind. Or something.

EXPOSED: The Disability Living Allowance claimants ‘raking in a fortune of taxpayers money’ for bad backs, heart disease and having no legs.

TSUNAMI OF SLEAZE: 25% of people who attend music festivals admit to having slept with someone who they didn’t later marry.

EXPOSED: The lesbian parents seeking to ban Father’s Day because it infringes on their human-rights.

While in politics/ tory scum we had:

£15 million on a Thatcher museum? While disabled people surf skips for food? How much more of this can we take? PS it’s our money!

Would you be happy to give up your job so someone can do it unwaged? No? Then don’t tell me #workfare is a good idea. Workfare costs jobs.

The War Nerd: Who Won Iraq? Answer: Anyone Who Stayed Out

When tarting up UKIP office space, always put up a ‘wacky’ sign that reads ‘You don’t have to be racist to work here, but it helps’.

UKIP members have nothing to fear from GCHQ’s covert intelligence gathering operations.

The floods in Central Europe may well be an indicator of man-made climate change as opposed to God being angry with the EU.

Struggling to find Nigel Farage on Question Time? He’s the one on the far right. #bbcqt

General tweetage was as diverse and bizarre as ever:

I just cleaned my whole house in an hour. And by cleaned, I mean went out for drinks with the girls.

just trying to relax by listening to some old tapes of whale song, but only just noticed how misogynistic the lyrics are – briny filth.

The weekend goes so quickly when you spend it screaming in despair.

Monday is Jeremy Paxman’s favourite day of the week. He likens it to "An owl in winter. Soft, snowy, mysterious, comes after Sunday."

FATHER CHRISTMAS. Save on costly surveillance & time spent working out who’s been naughty this year by just asking GCHQ.

ADD ‘-meister’ or ‘-ster’ to the first syllable of your surname to find out what you’d be called if you were a twat.

WRITING TIP: Be quick to overlook the faults in your own writing to leave more time to criticise the work of others

You can simplify Schrodinger’s cat experiment by putting a dead cat in the box. #ScienceTips

I had a bad start to Wednesday:

Woke up in a flap as I didn’t know how to turn alarm off in new OS. Shower. Come down,step in a puddle of cat-piss. Made coffee, milk’s off

Be aware people, Monday is all ninja-ed up and is posing as a Wednesday.

I noted a news story:

Revisionist tinfoil hat of week; Was Elizabeth the first a man in drag? See, the truth at last. Fight the matriarchy claiming all history!

‘She’ let it slip with "I may have the frock of a weak and feeble woman, but I have the loins of a donkey. Errr, heart & stomach. Of a king"

Good news. We have identified a further two Cylons among our staff which means there are now only six walking among us 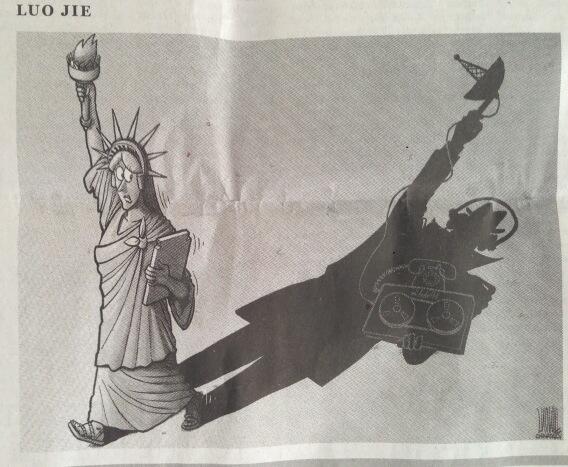 #AQUARIUS: Everyone you know will eventually die. Some of them not soon enough, sadly.

I was left wanting on a science problem:

Twitter, science problem. When Charley is in the Great Glass Elevator and the rockets cut out, would they remain standing or float?

We can overlook the 3 males smashing the glass ceiling irony for now. Though if @kermodemovie has any holidays booked I’m here all week.

Mrs thinks they would float/ stick to ceiling. I think gravity and air resistance of the GGE would mean they would stand.

My thought experiment involving a cat, cam, and shoebox has been ruined by the cat having read Schrodinger.

The cat refuses to act naturally when encumbered by a respirator and gieger counter.

.@StraightPrideUK When you finally suck a cock, all it’s going to taste of is relief

"I have learned from my mistakes, and I am sure I can repeat them exactly" Peter Cook 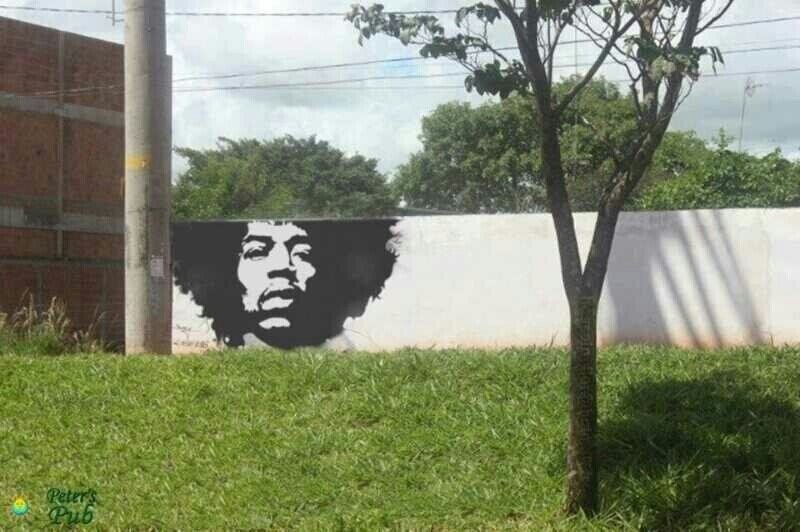