We’ve done the Outlaw. No-one wants to hear about that any more. That would be very boring.

However, I will say in passing that it was so bad on the day I was thinking that was my last triathlon. Until I got that statistic that once I finished the swim I managed to overtake over 200 men. (That was how the statistics were presented, ‘men’s race’. I’m not trying to fudge the figures or discount the women, shitloads of them kicked my sorry arse.) That is incredible. If I took swim lessons I could be a contender. I’m up for it again now.

Here’s some snaps and we’ll move on, saying no more about it.

Pushing it out for the finish. Every inch exist in miles. 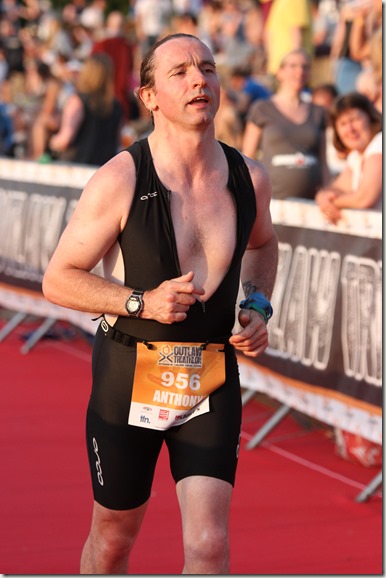 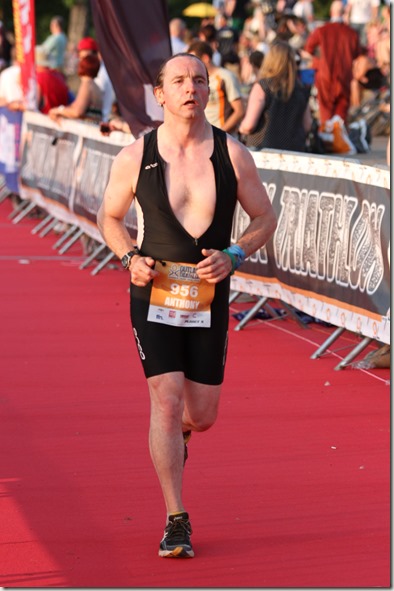 And over the line, unaware I was being photographed; 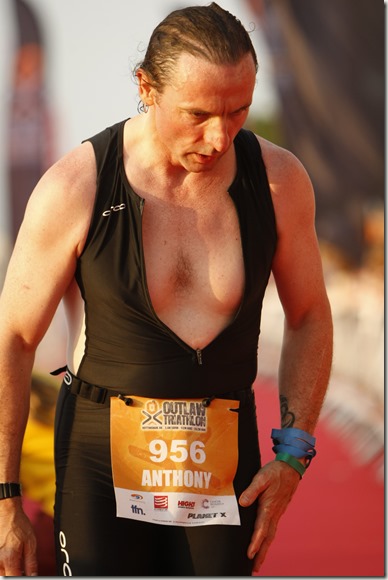 As I said on Twitter, “This is what it’s all about: 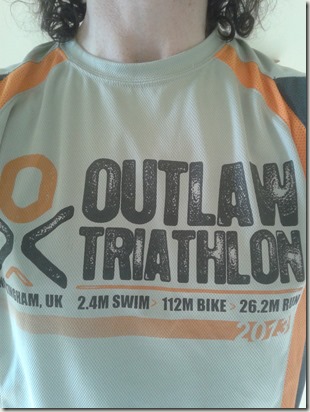 “You can talk of personal growth and aims, but really it’s all about wearing a T-shirt that says ‘I am awesome, bow before me’”

This week I’ve been back to training, perforce, as the garage have my car. I did the first two days in this beastly heat on the bike, nearly 22 miles a day commute, flat out in top gear and lost 2lb! Bonus.

As I’m thinking of kicking some triathlon arse next year I’m trying to heat acclimatise myself. If you can race in this you can blitz a cool day. So I bought a hat, donned my gallon of water holding bag and set off this afternoon. Goddamn! It’s a great idea but heat kills me stone dead. Still, keep at it.

Check the hat with the neck curtain thingy: 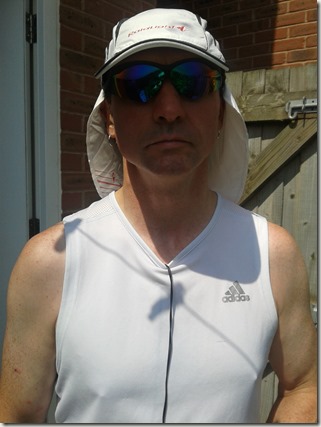 As one of my Twitter chums noted, Beau Buck!

I was getting strange looks on my run today, with my hat and backpack with the water bottles and such. People obviously thinking I was taking the bit of sunshine too seriously as they were running in just shorts. It’s heat conditioning, dammit. And it killed me.

Not a lot. Sleep, train, work.

I did make a resolution to avoid the A30 in Cornwall when I do my LEJOG (Land’s End- John O’Groats) as two Scottish riders were killed this week shortly after starting a LEJOG.. They’d only been riding a few hours  when they got twatted by a HGV. Dead as Betamax, just like that. Lorry drivers! They’re all arseholes.

Anyway, on to more fun stuff, namely the wonderful world of Twitter. Again I’ve been a tad busy so I’ve not been on that much. But I have two weeks of it. Here goes;

DEBATE: Single mothers – is it all their fault?

KATIE HOPKINS: “I’m rapidly running out of easy targets. Quick! Hands up who hates the cripples…”

BREAKING: Mosque near funeral of Lee Rigby bombed, in what we’re assuming to be an inside job designed to frame non-Muslims.

In politics/ tory scum there was:

#Tories: "We can force you to work for nothing; we’re powerless to stop MPs getting an extra £10,000 pa"

I, for one, am glad* my overlords will be getting a pay rise. And if that means 500k families using food banks, so be it *furious

Who’s on the MP’s independent pay commission? Any nurses? Council workers? People on Workfare? Odd, that, isn’t it? #bbcqt

I don’t recall money from Wonga to the Tories being referred to as a symptom of their party being dragged into the loan sharks’ camp. #bbcqt

Tories funded by bankers, Labour by unions. Remember that time unions were bailed out with £bns and caused a £1tn debt? No, me neither.

Surely now it’s the Tories’ turn to sort out their links with the National Union of Shady Bankers And Chaps We Went To School With.

Whaddya mean we gotta abide by the rule of law? Damn eurocrats, coming over here and making informed decisions.

Govt says prince Charles’ letters to remain confidential while #gchq spy on plebs. Nothing to fear if nothing to hide only applies to plebs

To say that socialists are "as much of a danger" as fascists is a statement that could only be spoken by a rich white straight businessman.

What is the point of the government holding a summit on the growing payday loan crisis when the Tory Party is funded by Wonga?

My first Glastobury was 1994. It was before Twitter so I had no idea who to like or who to hate and had to just enjoy myself. It was awful.

There has never been a better photo of a neighbour’s dog saying hello. 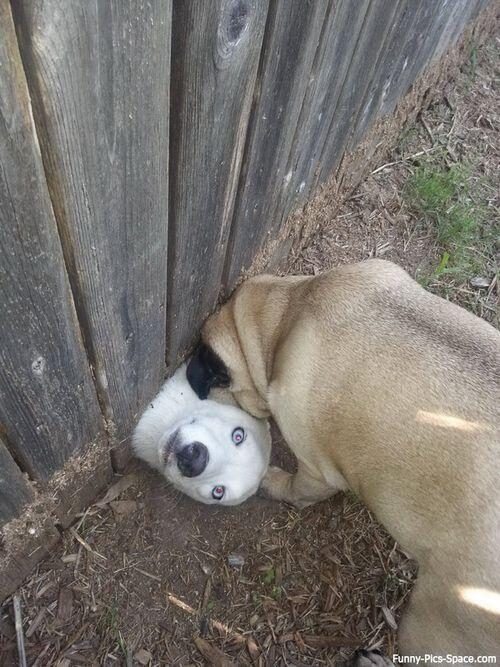 TENNIS FACT: Tennis players are so superstitious that they only ever refer to Andy Murray as ‘The Scottish Player.’

I noted : Finished the second CD (of 8) in my "learn yourself right good German to speak" course. *proud face* Of course now I want to invade Poland.

On the train home a couple of hours ago, someone answered their phone with ‘WAAAAASSSSUUUP’. I’m still not over it.

Kinda got a thing for redheads. And brunettes. Blondes too. As long as she has hair I guess. Or not, it’s probably not a deal breaker.

Today’s radiotherapy music was Mariah shitting Carey. This has possibly been the lowest point of my journey so far.

A cute guy asked if I was single and I just shouted, "CHEESE IS MY BOYFRIEND!" then high-fived his face. Flirting is hard. 🙁

Those bloody trade unions undermine our society by working hard to protect & further the rights & interests of working people. Stop them! 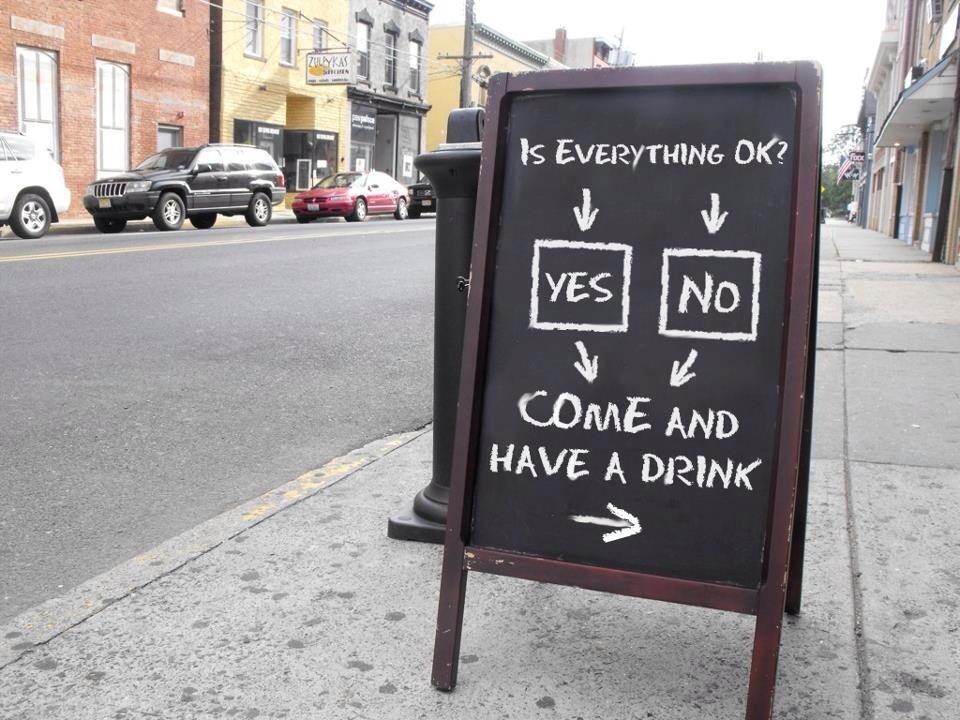 Eating donut in car on the way to exercise class. #doingitright

The most inappropriately named Ice Cream van ever

Blimey ! That Stuart Broad must be a solo Axis of Evil.He’s been accused of dishonesty by that paragon of moral rectitude @piersmorgan

I see tensions are running high with the atheist marching season…. No, hang on a minute

Have YOU suffered the devices of Satan, and it wasn’t your fault? http://en.wikipedia.org/wiki/Lawsuits_against_the_Devil …

Man in park shouting “You’ve been warned about this, Horatio” at a squatting dachshund.

To which I commented: PC gone mad! You see what I did there? *gets coat*

I just rang Alcohol Concern. I told them I was worried I didn’t have enough beer in the fridge. They’re quite rude, aren’t they?

I don’t get time to put in the necessary Twitter hours any more.

Oh, before I go, one thing. Rod Stewart as an uncredited session singer on ‘In A Broken Dream’. Absolutely fantastic. ‘Rod’ and ‘fantastic’, I know. But it really is.

Keeps on surprising me on my ‘phone and blowing me away.