Well that was fun. In no way, shape or form.

As last time I stayed in a hotel and only got a few hours sleep due to the bar and the loud drunks at throwing out time, this time I had a plan. Nip to Nottingham, register and drop my bike and kit off, come home, sleep in the day then drive back fresh as a daisy for the start.

Due to the bloody heatwave the A50 was rammed with all the families going to Alton Towers, so that screwed me up. I skipped the ‘mandatory’ race briefing, (yadda yadda, don’t get killed, yadda yadda,) and tried to come home the long way around, up the M1 to Leeds then across the M62. As it was a new route for me I was having issues with lanes in Nottingham. I was in the outside lane of two when someone in front of me stopped to turn right. I checked my mirror, saw a gap and darted to the inside lane. I hadn’t checked my blind spot. BANG! Someone was undertaking me. Oops.

That’ll be a new wing for me, please. And two doors for you. 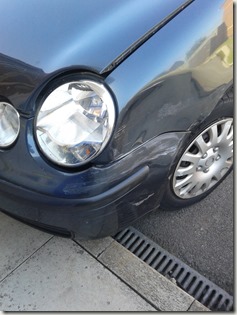 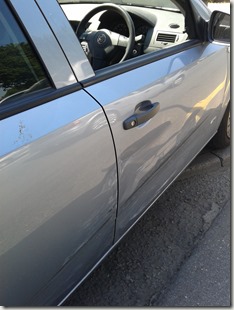 When I got back I realised I had 10 hours before I had to get up so I did some last minute sorting of kit. Then I had an hour and a half in bed, but woke up again. I couldn’t get back to sleep but I wasn’t worried, I’d still be able to get some kip when it got to night time. Then next door came back with a bunch of her coke-head mates to celebrate the heatwave. Ace. So I ended up grabbing another hour about 0130, then I had to get up at 0230 and get on the road for 0300. I was a bit tired to start with.

We started at 0600, I took this snap on the way on to the site, sunrise over the Outlaw lake: 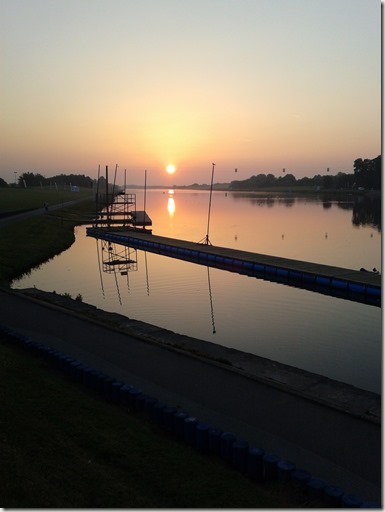 Not a bad snap from a camera ‘phone, I think. But look at that evil yellow bastard. You can tell what’s in store.

Astonishingly, after the swim (the weakest of my three weak disciplines) I made up 200 places on the ride and run! Gobsmacked. I’ve just this minute found that out. *chuffed face*

Anyway, the swim was just a matter of getting my head down and doing it. Then came the transition, I jogged out of the lake, very conscious of the fat, shell-shocked geezer I’d seen wobbling out of the lake on my last video. I was feeling alright. Last time we weren’t allowed to get naked in the changing tent as there were female assistants about, so I swam with my tri-suit under my wetsuit, took my wetsuit off put my cycling shorts on (on top of my soaked tri-suit) then set off for the ride. Had I of attended the race briefing I would have know you could get properly changed this year.

I did not. So I found out at about 50 miles that my super-duper, no-pain cycling shorts (which you are supposed to wear on their own) are useless if you are wearing a tri-suit underneath. The pain was just as bad as the first time. Possibly worse because this time I was sure it wasn’t going to hurt at all.

I was flying for the first two laps (of a three lap course) then suddenly the heat (and arse pain) got me. I just faded and it was horrible. You know you’re not having fun when you are hoping you get clipped by a bus so you can quit with honour.

I ground it out but I felt like I could have cried it was hurting so bad.

Then on to the run/ shuffle. Dear god that was bad! 30C, the slightest of breezes and wide open spaces with no shade. I really thought I was going to have to drop out on the first lap of the lake. It was hellish. When I got to the end of the lap they’d set up a sprinkler, I stood under that until I was totally soaked and managed to set off at a slow jog! Eureka! The secret is to stay soaked. So I kept on drenching myself in the lake and the river on the long laps. By the turn around point at 20 miles I was up for it. Well, I had a hell of a lot of motivation to make the misery stop, anyway. Amounts to the same thing. I set my face to flint (as Wendy would have it) and pushed on. I passed two feed stations without stopping and down the last mile and a bit actually forced myself to open the pace up (to zimmer frame speeds) and almost ran in.

It was a terrible time,14.09:52, which is 37 minutes 49 seconds slower than last time, but I really think it was more of an achievement to have finished this one.

I was thinking about it afterwards, I went for probably less than 20 swims in the two years since my last Outlaw, I did one (count them; one) big ride (over 60 miles, two if you count big as over 30) and I’d buggered my run fitness for the month or so before the race with that injury.

This has lead me to two conclusions; 1, if you have a base level of fitness and a degree of stubbornness you can do an Outlaw. 2, it’s a whole world less hellish if you put the training in first.

Btw, that running soaked thing, it meant I had to run the whole distance with squelching, heavy feet and now my feet are ruined with the inevitable blisters. I can barely walk. But I simply couldn’t have completed it otherwise.

I got in at 2340. I did stop off for a McDonalds on the way home, mind. I was ravenous. And I needed salt. So I forced myself to observe strict triathlete dietary protocols by having a Big Mac, a quarter pounder with cheese and a medium fries. And a diet coke. Only joking, no coke. Then I had a chicken leg and a thick crust of bread when I got in.