I’m using that as a metaphor, btw. I find it fascinating that one cannot remember pain. You remember the sweats, the swearing, thinking death would be a mercy, but you can’t remember what the pain felt like.

So it was with crashing my lovely, lovely motorcycle.

Not the pain (metaphor remember? Pay attention at the back.) but the feeling of being fully alive. I’d forgotten. Or rather remembered as one remembers pain. I took it as a truism, that while “the prospect of being hanged focuses the mind wonderfully” it is nothing like as focusing as the reality of imminent pain and possibly sudden, violent death.

I can see why in my feckless youth I pursued that experience. There is nothing quite like it. You either live or die, but you are 100% alive until then.

I can’t say I’m as fond now, in my later years. The pain and damage to my bike don’t seem worth it. But it is a hell of a rush.

In case you’re wondering what the hell I’m on about, I’ll start from the beginning.

I was riding to work on Friday night. It was 23.20, no traffic, bone dry roads, ideal conditions in other words. I was chugging along in a 40 zone, I saw the traffic lights were on green so I blipped the throttle to get to them before they changed. I was focused on the lights, no traffic, no worries. I saw I was going to make it through the lights so I went to jam on the brakes, only to find some utter bastard of a lorry driver had shed half of his load of sand on the road. It was 2 inches thick, loose dry sand. The front end started skipping about like crazy so I had to let the brakes off or crash. I hung on as I skipped over the sand, miraculously staying upright but by the time I had regained control I was still going too fast with the width of one lane between me and the roundabout. I had time to think “this is going to hurt”, *island amnesia* over the handlebars landed on my head, thought “dead”, *island amnesia* put head up looked around, on roundabout, put head back down *pain* “how’s my bike?”

Odd. The calm “this is going to hurt”, the equally calm “dead” when I thought I was going to snap my neck, then no continuity like “ooh, not dead” Or “my that smarts” just; aware of the pain, “how’s my bike?”

Anyway, the good new is I just bent my brake pedal and bent my handlebars a bit, and snapped something off my helmet. And grazed one engine casing. Nothing too serious.

Buggered both my wrists and bashed my groin badly. And battered my ribs. And generally hurt everywhere. But nothing I couldn’t ride away with.

Funny because a car following me had lost control on the sand. The driver stopped and helped me pick my bike up (buggered wrists) while his passenger called the police. I was checking my bike then I rang in work to say I was going to be 10 minutes late as I’d crashed and the bike was flooded.

They were saying “Are you OK? Do you want to have tonight off?” I didn’t know why they were making a fuss. Then I went to ride off, the car driver said “Are you OK,I don’t want you getting around the corner then going in to shock.” I said “Don’t worry, I’m used to it.”

Here is the sand spill; 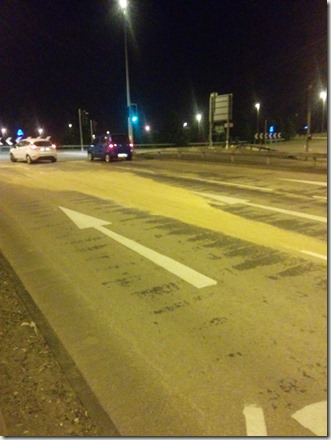 Down the middle of the picture. Well deep, just where I was trying to brake. 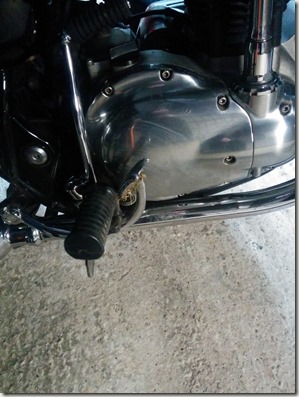 Not too bad damage, I was lucky.

The brake pedal valiantly took one for Team Buck’s Bike.

Here is the before and after shot: 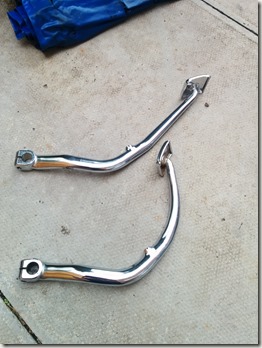 The top one being the new one I got as a replacement.

I tried to head off Wendy’s inevitable worried tirade of I-TOLD-YOU-SO’s with a soothing email:

Hi honey bunny,
Bit of an incident on the way to work last night. But it totally wasn’t my fault. Well, 90% not my fault. At least 85% not my fault. Look, let’s not quibble about where to apportion blame, or who predicted what to whom,  dwelling on such irrelevant petty details is frankly beneath us. Let us just draw a line under it and move on.
What happened was: I charged up to the traffic lights, went to brake and some lorry driving twat had dumped a 2" thick layer of sand right across the lane. I had to let the brake off and just cling on for dear life. Amazingly I kept it upright, but I was carrying way too much speed into the roundabout. Ended up lay in the roundabout.
Luckily it was soft grass so I’ve got away with slightly bent handlebars and a bent brake lever.
As far as I could tell. I’ll have a proper look in daylight.
Anyway, the lesson to be learned here is lorry drivers are all bastards.
It was a shitload of sand, the car behind me lost it as well.
Hope you are well,
Love,
Buck. xx

Which brings me to handlebars. A whole other story of pain and anguish.

As they are slightly bent, but feel massively wrong, I decided to replace them. The standard one were £70 but aftermarket, cafe racer style one’s were only £34. No brainer. Bought me some funky new bars and started the journey to cafe racer. I got the clubman style bars as you can just put them straight into the clamps the bike already has. Clip-on, the full-on cafe racer style bars attach the fork leg, leaving the clamps empty and ugly, thus necessitating buying an new £200, headstock without the clamps. That is later. For now the compromise bars.

So I got them. Utterly groovy. Check them out. 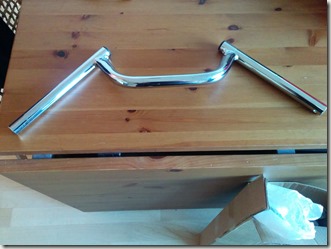 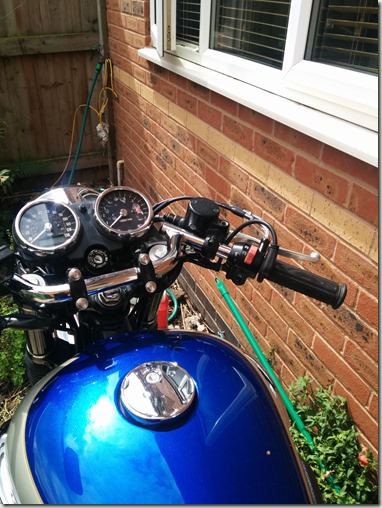 So I improvised, adapted and overcomed. As per army training. Cut up a jubilee clip and used that as a ‘shim’ (I think that’s an American word, but I’ve not seen the equivalent on any UK sites.) to fill the gap. Right, that’s that sorted. Then the controls won’t. I could tighten them fully, then you couldn’t turn the throttle or have them loose enough to use the throttle and the whole thing swivelled around the handlebars. After much swearing and experimenting I realised there is a little post on the inside of the controls and a corresponding hole drilled into the original bars.  It was getting late so I left it until today to do that. Luckily. As when I put it together I noticed the bars, due to that funky design of the crossbar being welded onto the handlebar bits, was too short. The grips overhung the bars by 1½- 2 “. That means you can’t put the stoppers in the ends, or in my case bar end mirrors, and the left hand hand grip would just slide off. Not good for safety reasons.

So I’ve had to buy some slightly less groovy bars and put the others on ebay. 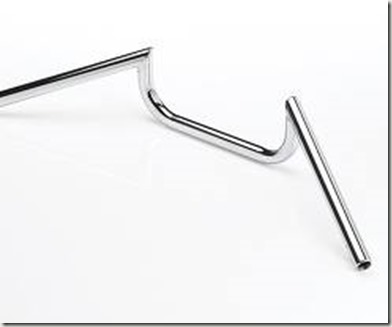 You see how there’s no overlap of cross bar to handlebar? No room lost on the handlebar. I’m hoping that does the trick.

So all in all it’s been… eventful, bike-wise.

In other news I’m thinking of sacking Walkers off and going back to Hermes.

In an ideal world I would stick it out and get a full time day job at Walkers, but they have jacked me out of that nights-out gig (start in the morning, work all day, sleep in cab, work next day driving back)  in favour of day lads. This is, after all, the shift they can’t fill, so they want to keep me on it.

And I’m willing to take a bit of hit to get back on days. I don’t love nights. Especially not these nights where I’m starting at 23.45 hrs.

And then have a night off. Then at weekends starting at 19.00. You just can’t get into a proper regular sleep pattern. And with us actually getting a summer this year I’m baking in bed and I can’t open the windows because it’s school holidays… All in all, not loving it.

I thought I was getting depressed again the other day. Really low and anxious on a few occasions. Then I fired my bike into the scenery and suddenly I was fine again. Better than Electro Convulsive Therapy.

In, knock me down with a feather, spank my arse and call me Charlie, news, Wendy is getting into technology!

I gave her my old ‘phone when I upgraded.

She didn’t use it for ages. Then she started taking it out to call taxis. Then she realised she could google stuff, and I showed her how to text, then email. She’s all over that shit now.

Got here a belated birthday present of a Nexus 7 tablet the other day. She’s loving it.