I’ve had enough of this job already. I’ve had four paydays, they’ve got one of them right. I’ve not been paid again this week, I’ll get it on Tuesday, allegedly. I’ve still not been paid for that night out I was forced to take two weeks ago, and I’m generally sick of the place.

There are some other jobs going on the jobsite. Better pay, but agency again. I’m going down tomorrow to register with one to find out the full details before I commit.

Looks like I’ll be going back to Limited Company. Balls. But the money is atrocious on PAYE on emergency tax. When they deign to pay me. The last two weeks I’ve only got 45 hours or so, the only down side to bailing now is the job security for January/ February. There is bugger all agency work then. And the holiday pay and that.

This job is pissing me right off though.

Driver’s law says we must have a 45 hour break after 6 shifts, can be reduced to 24 once a fortnight. This is what I’m up against: 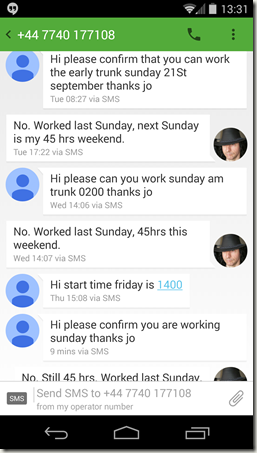 In other news I’ve had a productive weekend. Saturday my new (cheap but as it turns out, sufficient) vacuum gauges arrived. I had a few mis-steps working out how to use the bloody things, but now I know it is really quick and easy. They are to balance the carbs on my bike. Apparently they go out of synch at the drop of a hat so one cylinder is getting bucketfuls of petrol the other just drips. Doesn’t make for smooth power delivery. I had a bit of a dick about setting them up. Put the pipes on the gauges. Then looked at the instructions and saw the valves fit on to the gauges, then the piper to valves. That didn’t work. Looked closely at the instructions and saw it was gauges, bit of pipe, valve, rest of pipe.

The when I fitted the pipes to the carbs they took ages for the needles to drop or rise. I had to keep taking the tank off to get at the adjust screw. Three times on and off. Then I realised I’d left the valves closed. D’oh!

Opened the valves, quick turn of the screw, job’s a good ‘un.

Still, never done it before, had no idea what I was doing, sussed it in the end, next time will be a 2 minute job.

Also I went and saw my mam who’s over from Johnny Foreign land. Long time no see.

Then I set about a simple job (‘how hard can it be?’ To which the answer is invariably; ‘very’.) replacing my indicators on the bike. Nothing wrong with the old ones, I just fancied some tiny ones that don’t really show on the bike. Easy job, unscrew a nut, pull the old ones off, tighten new ones connect the wires.

How wrong can you be?

Turns out because the new ones are tiny little LED lights (very small, very bright) they use hardly any ‘lecy so they blink like crazy. You have to buy ‘ballasts’ to soak up the extra ‘lecy to make them flash at the proper time. That’s how I think it goes. More of a ‘fit ballasts and it magically works’ than a technical understanding.

Then there’s the wiring. Tucked under the mudguard, through tiny holes, it was a nightmare. I’ve fitted them, eventually, but one (at least) of the front ballasts isn’t working so they are still blinking like mad. Grrr. Ordered a new one. See how it goes.

And I managed to squeeze in the Warrington half marathon this morning.

Again that was more hassle than I expected. I parked up in Howley to walk across the suspension bridge to Victoria park and they’ve closed the footpath. Where I parked last year was a building site. Seems they are building flood defences for the Mersey (a dirty great wall). I couldn’t find another way around, and I didn’t have enough time to drive around to Vicky park. I’d just sacked it and was walking back to my car in a high state of miffedness when an old chap who was doing the run showed me another way. Then they delayed the start of the race by 15 minutes anyway.

I didn’t push the pace, slowed down for the hills and tried to keep enough in reserve. By mile 11 I knew I was fine and started pushing on, I did the last mile in 7.37! Not bad at all by current standards. Then literally sprinted the last bit, at a 5.33 pace!  Overall it was an underwhelming 8.13 m/m, 1:48.20. 10 minutes off my best, but the most comfortable I ever done it.

I took the bike for a spin this afternoon, it might be psychological but it did feel smoother and had a bit more poke.

I need some kind of medal.

Now my to-do list is register with the new agency tomorrow, then wait for some tiny tools to arrive to try and mend my ‘phone. I carry it around in a wallet/ case, flipped it open to make a call and dropped it on the concrete, smashing the screen. I’ve seen online that you can fix it yourself so I’m going to give it a go.

I was going to use the official repair place recommended by the manufacturer, but while I was awaiting a response I Googled them. Even their own Facebook page is knee deep in “AVOID!” On Amazon the reviewers were complaining that they had to give at least one star to do a review. Thanks, but I’ll try and do it myself.

I bought the screen and the ‘digitizer’ (the bit that lets you do all the touch screen techo-voodoo, I think) after reading they were a sealed unit and had to be replaced together. £70. Then I saw a youtube video showing you how to replace just the screen. £8. *headkeyboard*

I bought the screen as well. I’ll try and fix it when the tools finally get here, then if it works sell the screen/digitizer.

And replace the ballast when the new one arrives. That should be pretty straightforward. I know what I’m doing now and I’ve already done all the spade work.

I’ll do Twitter next time, now I’m having another shower and chilling out.