The Bonny: (referred to as a Hinckley Bonneville) 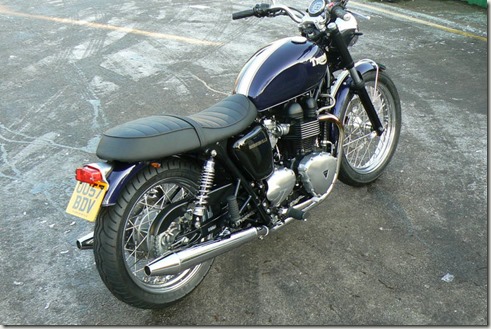 Plus: has the general look of the bike. You get the ‘authentic’ badge.

Negative: look at those not-very-convincing engine fins, ugly. No kickstart. 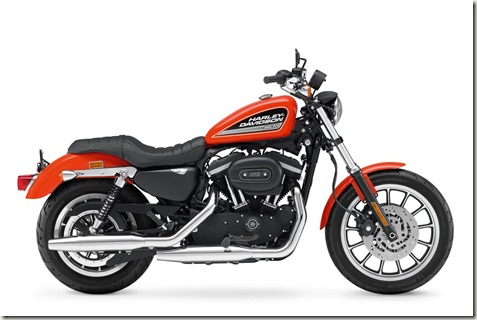 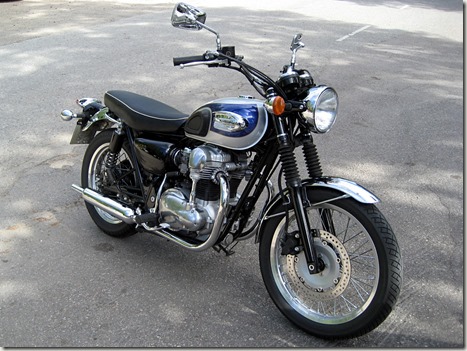 What swung me, you’ll recall, is seeing how simply someone had cafe racer-ed one. 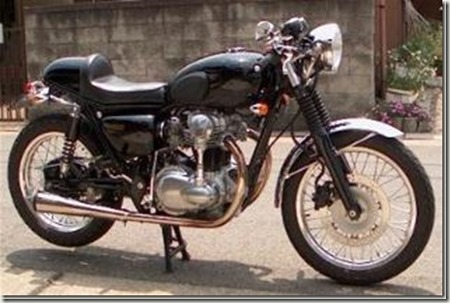 Hump seat, acer handlebars, smaller indicators and a slip on exhaust end can.

So that was why I bought it. Looks great, sounds great, gets you home at night, and has the potential to make a beautiful cafe racer. I have ironed out the flat spot on the revs (simple fix), put on acer bars after I pranged it, and upgraded the shocks front and back. Now I have a sweet handling, pretty bike. I have been looking for the last 14 months for a decent cafe racer seat. The trouble is, the frame under the seat is sort of diamond shaped so you either have to find a seat made for this exact model of bike, (few, and mostly crap) make one yourself (tried and failed) or have someone cut out the rear frame and weld in a U shaped arse end (a bit extreme).

Then last week I stumbled across this site in Thailand. (I thought it was the States as they take US dollars for payment.) Omega Racer.

Amazing kit, made from scratch, to order.

I saw this seat and new that it was *the* seat! 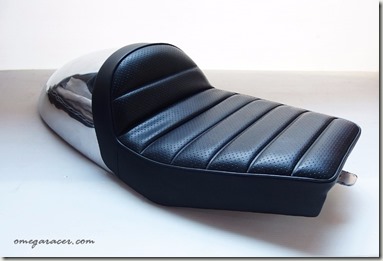 Then it was just a matter of saving up for it. I looked at it all night.

And all the next day. By the night time I broke and ordered it.

Not cheap but a one-time purchase and basically perfect.

Then I took to looking at the rest of the site. The only tank to go with the standard seat size (the one I’d ordered) was this: 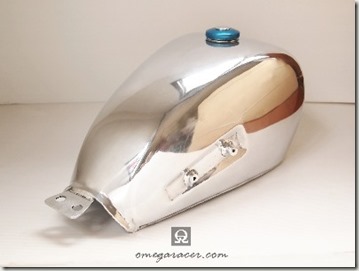 Note the lugs on the side of the tank for knee pads. 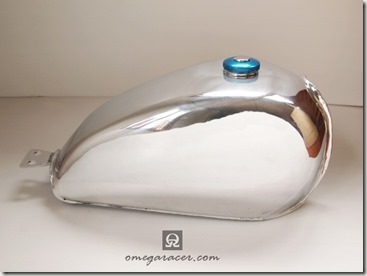 Nice, but not soul stirringly beautiful.

Then I saw the Norton style tank. 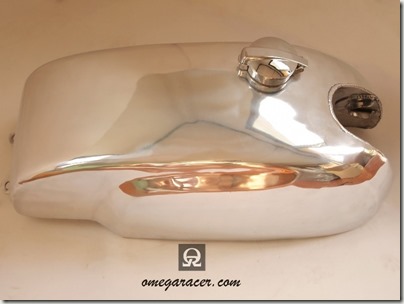 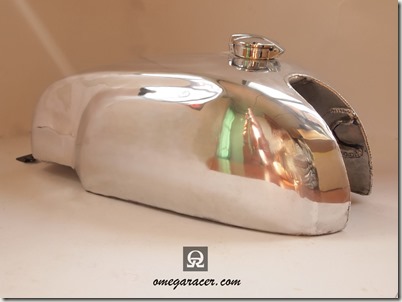 Just look at it! The contours are on both sides, can’t see that from these pictures.

I realised this was the tank I wanted. But it was longer than standard, therefore requiring a shorter seat to be made. In a panic last night I emailed the guy, asked him if he’d not started making my seat could I change it.

I literally lost sleep over it last night. I was worried sick I’d bought the wrong seat and would have to make do with second best. It would have ruined my chi, resenting my bike every time I saw it.

He got back to me this morning and said it was OK, I could change my order. So now I have to pay another £390 for a tank. The seat won’t fit without the longer tank, so I have to get both at once. But it is the right tank and right seat. And the guy is giving me 12% discount on the tank!  I’m leaving it bare, polished aluminium.

Then I will have the proper 60’s cafe racer chic going on. 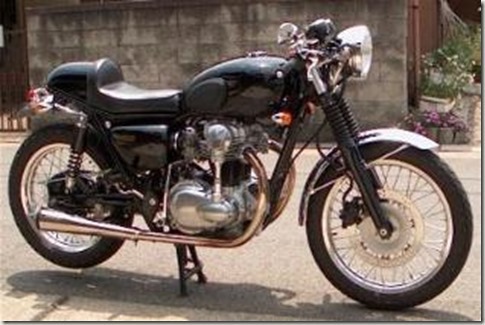 Note the long tank and the rear set seat. Also notice the dents in the tank. At the front that is so those clip-on handlebars can turn (the back is so you can get your knees tucked in, I expect) . The ‘Norton’ style tank already had the narrow rear end, and the site states that (on other tanks) if you want clip-on dents they’ll provide the tank pre-shaped. I’ve asked him if the Norton needs dents for clip-ons, if so I’ll ask to have them formed in.

So, that was a bloody expensive couple of days. In the couple of days between ordering the seat and realising I needed a shorter seat and tank combo I also ordered a new, short rear mudguard from Australia (oddly, half the price of buying one in Germany, even with P&P) and a rear light/ number plate holder from Germany. Combined, that’s another £100. The mudguard on mine is a bit knackered and rusty.

In the same vein, money as in, work has been surprisingly constant. The agency told me 4 weeks ago that Bookers (for whom I work) had lost a big contract so work was going to be scarce. They tried to bully me into working for other companies but I stayed firm. I’m after becoming such a fixture that when the next jobs come up I’ll be the automatic choice. The agency were getting a bit snotty. In the end I said that I just wanted to work for Bookers, was it workable? My next text would have been saying ‘screw you then, I’m off to Elite  – I think it is, the main agency supplier for Bookers-) They must have realised I was miffed because they suddenly backed down “That’s workable mate, no worries, just don’t want you losing work”

Anyway that was 4 weeks ago. Since then I’ve worked 6 days, 4, 6, 5. So, I’ve missed one shift off the legally permissible maximum.

Wendy’s news is not so good. They had a big meeting, it seems due to the tory scum cutting council’s funding, they have lost shitloads of funding for the Citizen’s Advice. They were going to sack two paid advisors, but as it is, they’ve sacked one and cut two people’s hours. Wendy, who was only on a 3½ day week (she works 4) has lost a day.

She was worried about telling me. Like I worry about money. See all of above. Obviously not.

I’ve told her she can always get a supplementary job. Like lollipop lady. Or hit-woman.

I forgot, in my bike obsession, to mention my trainers saga.

I had a really good pair of trainers, 2E (wide fitting) supportive to stop me overpronating. The online store only had 2 pairs left but they were cheap and really good so I got another pair.

These sat around for months until the first pair was truly knackered. Then I swopped. But they hurt my feet so after a few runs I went back to the old pair. Which prompted immediate injuries. I recovered then went back to the new pair. They still killed my feet, specifically my left, where the bones grind.

I unlaced the first 4 holes to try to make them more comfortable but they were still painful, so I ordered a new pair of a different model, but the same brand, Asics (US 7.5/ UK 6.5) 2E. I emailed 3 separate occasions to make sure it was US 7.5.

I sent them back and did lots of research, during which I found out if they are 2E it marked next to the model number on the tongue. I checked my painful trainers. Not 2E. Bastards!

Finally got the right size and width yesterday, but then I was laid low by an all day sinus headache. So today after karate, (with a surprise grading, which I passed. YAY!) I went for a run. These are full-on corrective trainers. They have an instep arch of barbed wire on concrete. Or something. To stop you rolling your foot inwards (overpronating). Bloody painful. I got blisters, which popped, on both insteps. And for some reason, the correctiveness was pushing all my weight on my left foot onto the bones that grind. So that was super.

I have the Warrington half marathon in 3 weeks, and I’ve only done 1 run in the last month, so I was testing my fitness today. I did 12 miles. On trainers straight out of the box. And those, brutal corrective ones. So much pain. On the bright side my fitness was fine, or if it was miserable I was in too much foot pain to notice.

I’ve adapted to them before, I’ll just have to do smaller, (smooth) road runs until I find a comfortable gait.

Even in sinus pain headache misery yesterday I went through the shed and washed and photographed everything (pushbike, shocks, mirrors, indicators, soprano sax,.. everything not nailed down) and stuck it on ebay.

I’ve picked up a bunch of people watching most stuff. I think there’s going to be some upping of bids on the bike and the sax, but if I sell everything at listed price (that currently has watchers) I’ll make £410. That pays for the tank at least.

Hopefully get a bit more.

I’m not selling my Tenor sax. I don’t play it, but when I do I love it to bits.

Also, when the tank and seat get here I can sell my current ones, hopefully that will get another £150.

Right, got to get off. Being pestered by ebay numpties. Just give me your money and leave me in peace, goddammit!