It’s been a while since I’ve blogged with one thing and another.

As usual it was “be careful what you wish for”. I wanted the Hermes job for some fast bucks (as it were) then ended up doing 70+ hour weeks. Two weeks my top line was over a grand. Yet we still owe as much.

As soon as xmas rush was over, the very next week, I got 3 shifts. Then three shifts, then 16 hours in a week.  I thought I’d pissed the women off who runs the agency as I had 4 days off before xmas, when I was bedbound with some filthy malaise.

I sent a text after the 16 hour week asking what was occurring, but thankfully they then shifted her upstairs and we got a new boss. Since then I’ve not been doing too bad. The downside is that the work starts in the afternoon now. So a 16.00 start can (and has on three occasions) turn into an all night shift. Glass half full, I did get 54 hours last week.

Then they announced, post xmas peak, an arbitrary pay cut. The long term workers say that was the peak rate, September to January, but no one told me when I started. It’s a pound an hour less on days and nights, one pound fifty on Sunday, and a fiver an hour on Saturday!

I swallowed my pride out of lack of option. I’m not cutting off my nose to spite my face. I text them and said I don’t work Saturdays anymore. Sunday-Thurs/ Fri only. My pride can live with that.

I’ve not posted any pictures of my latest incarnation of the bike on here. 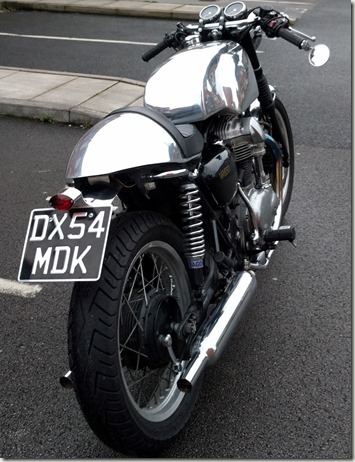 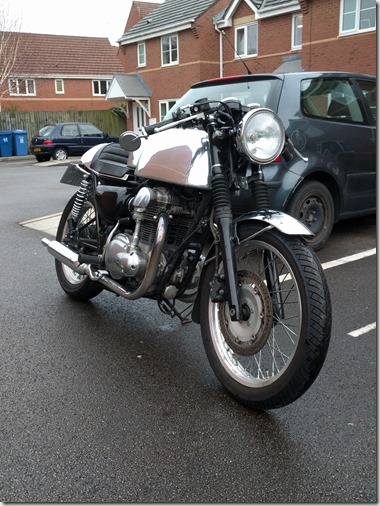 Actually that’s not quite the latest. I like the peashooter exhausts but I wanted the upswept megaphone style.

I tried to do it on the cheap. You can buy just the silencers, and also some upswept pipe bits. You have to take your bravery by the scruff off the neck and actually saw off the peashooter bit, just leaving the downpipes.

This I did, fitted the kick up pipes, slipped on the silencers,all in a few hours. Job’s a good ‘un.

You can tell this story doesn’t end there, can’t you?

Fired her up, roared like a wounded dragon!  Absolutely massive din. I took the silencers apart (as you are supposed to do) and the interior was basically a tube with holes in it. I should have took pictures. It totally took the piss. If you can imagine a bean tin drilled out all down the sides and all over the bottom, that was it. They said you could adjust the sound baffling (hence it being designed to be stripped down) but it was ridiculous. There was no way I could ride it, the plod would have been all over me, and the neighbours would be grassing me up. I ordered some baffling material. Lots of baffling material. but it’s not made that much difference. Also, while I was buggering up the back pressure of my exhausts I thought I go the whole hog and replace the big, clunky airbox (behind those black plastic panels) with K&N air filters. Just looks nicer. They look like red cones that stick straight to the carbs.  Obviously this buggers up your fuelling in a major way. Suddenly, instead of a choked off dribble of air going into the carbs you’ve got unrestricted gales of it.  So you’re 14/1 air/ fuel ratio goes right out of the window.

This means you have to replace primary and idler jets on the carbs and reset the pilot thingy. (You see how quickly I picked up the jargon?)

To be honest, this sounded a fiddly and potentially bike killing job so I was putting it off. When I realised I was going to have to do it for the exhaust I thought I’d do the air filters and exhaust at the same time, save having to do the job twice.

You have to strip the seat, tank, side covers, a wiring harness thingy, unplug the breather pipes, take off the air filters and the engine breather filter, wriggle the carbs out from their rubber socket, turn them upside down and take the bottom off just to get at each jet. You have to do main jet first. Get that right (there were three sizes to try) then the idler jet, then the idler thingy.

By the time I’d finished I could strip it all down and reassemble in about 25 minutes.

And I’m still not happy with the performance. But I’m on hold at the moment because I’ve realised the cheapo exhaust option was a lemon. I’ve had to order the proper full exhaust.

Now I’m doubly kicking myself because I’ve ruined a perfectly good exhaust system for no reason and I’m having to buy the full cost one anyway. Stupid, stupid. stupid.

Anyway, this is the exhaust I’ve ordered. That’s it then for this year. I’m going to get it running right, (oh, and have a week off in May to take the engine out and clean it up and respray it back to tidy) then just pay the bills and get us straight.

Next year I’m going to have to do the handlebars/ headstock thing though. After seeing this: 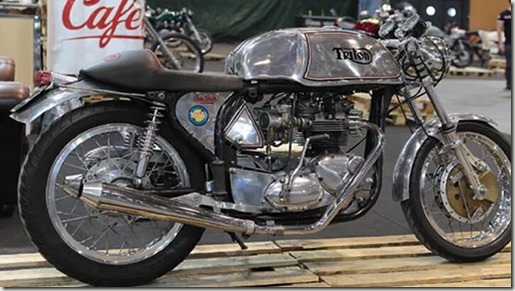 OK, uncomfy as hell, but look at how aggressive those clip-on handlebars make the bike’s posture.

Damn. I’m looking at that and I realise my bum looks big in this. Look how the tank line curves down, the seat picks up the line and the mudguard extends it. Damn, that’s classy. Mine’s looking like what it is, bit’s slapped on randomly by a clueless but enthusiastic idiot.

Still you do the best you can. Now I’m thinking of having the diamond rear frame cut out and replaced with a U loop so I can get a narrow, low seat. Balls. DAMN YOU, INTERNET!

Well, that was supposed to be touching on my bike progress or lack thereof, turned into a major digression.

Haha, scrolled back, started with “latest incarnation of the bike…she’s looking good” a few paragraphs later “looking like… bits slapped on… by a clueless…idiot”

Coveting your neighbours ass is never a good thing on the internet, the whole world is your neighbour and some of their asses are built by professionals. The very best in their field. I’ve got the capacity to appreciate and understand their artistry but noting like the skill to emulate it.

Right, I’ve completely lost whatever thread I was hoping to pursue. I’m a bit cheesed off now.

I’m back at work tomorrow (morning, yay!) so I’m going to have a shower and plan my revenge on that Triton.

Sorry, I hadn’t planned to get bogged down in bikes, more anon.

Just noticed something else. Look at how snugly that back wheel fits, then look at the W650, both mine and the shop one (demonstrating the exhaust) huge gap over wheel. I need shorter shocks. Then I’d have to get shorter fork stanchions to drop the front equally. But that would probably bugger up ground clearance. Oh now I’m in a whole world of aesthetic quandary.