This is the start of my week off. I’m going to blog my attempts at bike restoration. The engine has had two winters of English rain and salt and is starting to look tatty.

First the other things that have been occurring.

I’ve just found out that Igloo, the primary agency for Hermes drivers, has lost the contract. As of the 3rd of July they are off site. This means all of us who are Limited Company drivers have to register with a new agency, Extra Personnel. Change is always a gamble. At the moment I’ve got my own truck (a 64 plate DAF) when they remember to save it for me, I’m getting regular work and at a decent start time. A sort of 08.00- 11.00 window. Mostly about 09.30.

I’m going to have to see if this new lot will stick with it. I’m not doing nights for a start.

My flute head finally arrived back, it is splendid. Should prevent my allergic reaction. Seems to blow free-er as well. Bonus.

I’ve gone back to calligraphy as well. Copperplate, which is *so* hard, and Gothic Blackletter which is hard but in a different way. 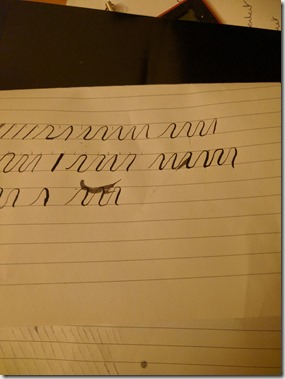 Copperplate is weird as you have to do ovals, at a 40 degree slant with hairlines up and squash the nib to make fat lines down. As you can see from my first attempts, bloody solid. 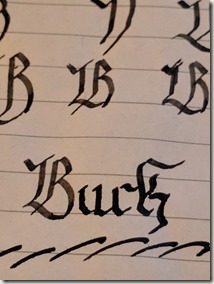 What else? Ooh, finally sorted a bit of my garden into a a permanent feature that I like. I moved my acer last winter, carrying a back breaking amount of dirt in the roots, to try to minimise the stress and sulking. Seems to have worked. 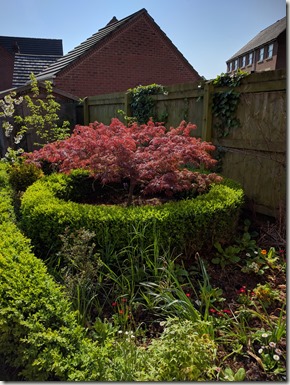 I’m not so sure about everything else, especially the box hedge running alongside it, but the box circle with the acer sitting atop it is spot on. Now just got to wait for it to fill in. I’ve found a bit of box blight since the picture, when I was trimming it. Monty Don says you can grow through it just by giving a weekly feed of seaweed compost. 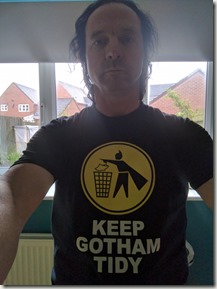 Today I went out to get a speaker for my ‘phone for the long hours I’m going to be spending in the shed. I put the washing on before I went out, came back to this: 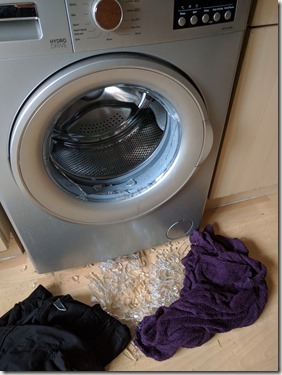 I was caught up in an altercation on my run on Sunday, between some cyclists and a herd, 20 at least, of dog walkers. It made me think of martial arts again. And Lettie, my niece, was asking about weight loss martial arts. I’m thinking of doing Muay Thai (kickboxing). It’s not pretty but it is practical. The main selling point is that the traditional grading is by fighting people of other clubs. It’s like traditional boxing in so much as there’s a huge emphasis on fitness and lots of time in the ring, actually fighting. That is the one thing you don’t really get in other martial arts, a sense of real world confidence. You can spar and such, but you don’t know how well that would translate. I’ve been watching videos from the clubs, it’s boxing gloves and shin pads, but knocking the crap out of each other. And I know of one girl who’s husband beat her up, she did kickboxing and knocked seven bells out of him when he tried it again.

Wendy nearly died of eye-roll when I said. She thinks I’m determined to join every martial arts club in the world.

So, to the point, this week is about my bike. Taking my ‘getting there’ bike and tidying up the wear and tear.

Of course, Valhalla Bound is looking nice, but worn. I want to return the engine to this: 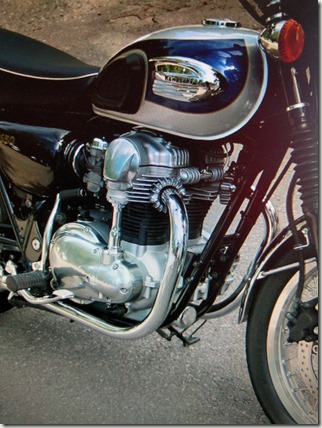 Yesterday, after an early dart, I cleared everything out of the shed and brushed it out, chucked down our old rug, and, after much sweating and heaving, popped the bike in. Today I followed the instructions. Tank off, seat off, exhausts off, side panels, air box, carbs, brake lever, foot peg, all the electrics, breather pipes, gear lever, clutch cable, sensor cables, final drive sprocket and chain, alternator, engine mounting bolts and engine brackets.

Then just lift the rear of the engine and pull it out to the right.

I was heaving with all my might and couldn’t budge it. I was getting worried. I couldn’t lift it enough to even replace the brackets and such. Couldn’t get it out, scared I couldn’t even get it back in.

I got my car jack under the engine (with a bit of wood between it and the engine, obvs) and jacked it up. It lifted a bit but not enough. Now I was really panicking. I tried three or four times in different places. As I was jacking the engine up it was lifting the frame with it.

I thought it must be caught on something, so I dropped it again, and had a mooch around. There was another bolt running through the back of the engine through the frame. Bastard. No mention of that in the workshop manual. I popped that out and, although it was still heavy as a bastard, managed to get the engine out. 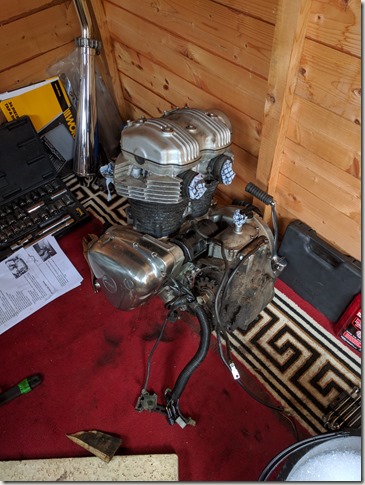 I started to wash off the oil and mud and crap but my plastic scratchy thing soon got clogged and I was just spreading it. I have some stuff that’s supposed to clean it up right nice. I’m letting it dry overnight then crack on tomorrow.

While I was working I heard a thud on the roof. A baby bird had run out of fly. 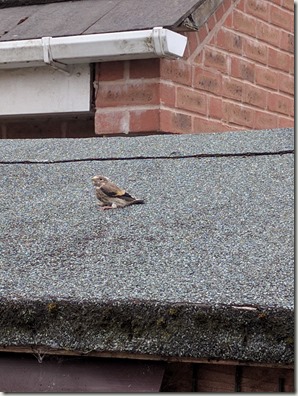 It spent 20 minutes getting it’s breath back then flew off.

Well, I’m committed now. Got to get the job done.

More as it happens.