I’ve properly started my new job now. I had 7 days of training first. I had a 2 hours driving assessment to start with. Then I started the training 7 days. I was supposed to do a day’s classroom, a day out with a driver (just watching) a day’s classroom then a whole day out actually doing the job with an assessor watching me. That was the big stress day. Then a day out with another driver watching me, then two days out with another new starter, to watch each other.

I was in an artic the whole time, and I’m quickly getting used to the manual gearbox so it wasn’t too bad. I was worried on my assessment day but I passed. The next day, when I thought I could relax there mustn’t have been any spare drivers ‘cos they sent me out with another assessor! D’oh!

I got through that, did my two days (one driving, one observing) with the other new driver and started my shifts on Thursday. I had an easy start, an artic with an auto gearbox, full size trailer and one drop. Bread and butter to me. Dropped it off, back with 2½ hours to spare, sat in the canteen until home time!

The second day was when it got a bit worse. They gave me a rigid. Only a dinky little 18 tonner but buggered if I could remember how to drive one. Any fool can drive one forwards, but I’ve completely forgotten what room you need to turn one around, and I was bollocksed as soon as I had to reverse. I’ve five years of experience with artics. For that you pull over near to where you want to reverse into, then screw the cab around which pivots the trailer over the back wheels, get it pointing in the right direction then straighten up. I was lining the truck up in the wrong place to start, expecting it to turn when it wouldn’t, and turning the wheel the wrong way be reflex. It was a nightmare.

On Sunday they sent me out in a 26 tonne rigid. These are bastards for two reasons; the rear wheels are a good 6-8 feet in from the end of the box, so they have a vicious swing, and they have a semi-auto clutch. You rev it and let the clutch out and it cuts your revs and slowly lets the clutch engage. I stalled it the first time. It’s a nightmare, especially on hill starts as you can’t over rev to put some power into it.

Anyway, I was coping with the overswing and I was getting on top of the fecking stupid clutch, but the reverse was still a nightmare. The main trouble with this job, is Co-Op shops are little convenience stores, parked in the middle of housing estates and such. So virtually every drop is an absolute nightmare to get to.

Here’s one in Manchester: 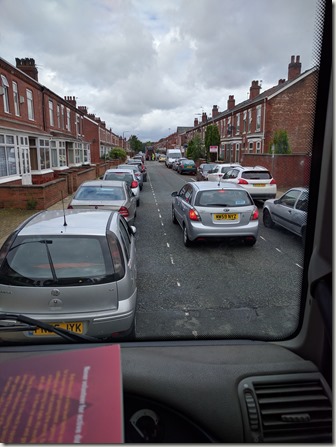 As you can see there is enough room for the car. But trucks are wider, and that’s travelling in a straight line. If you want to turn you need swing. I couldn’t get back out of that one, I had to follow it into the housing estate to find a place to get back to the main road. I had to keep stopping and tucking car wing mirrors in as it was that tight.

Back to Sunday, 26 tonner, took me to this poxy little shop in a poxy little village, I had to drive through a sign saying “Unsuitable for HGV’s” to get there. The shop was in the middle of the main, tiny, street running through the village. This meant I had to pull across both lanes and force everyone to stop and wait for me to reverse it into the side street by the shop. So, lots of impatient drivers queuing both ways, tiny road, lots of foot traffic. No pressure then. I set it up all wrong, if it had been an artic it was perfect and I’d have been in in seconds. Shunting back and forth, arse end going all the wrong way, I ended up mounting the pavement (not a prob, just gave me more room to swing) but I was having to concentrate on not hitting pedestrians. *bang!* What?

There was an overhead sign hanging out over the pavement. I was staring at the pedestrians didn’t even see it. *Was* hanging overhead. Not any more.

Fourth solo shift and I’d had a crash. I assumed they’d sack me off. My first week of a 12 week probation. I got back to the office, they went through the RTA forms. I was honest and said I was struggling like a bastard with rigids. They said they’d put this down to a training issue. Either get me some mentoring or put me on small rigids until I got back up to speed. I’m hoping for the former. I have no confidence at the minute. I am driving miles whenever I need to turn around because I have no idea what space a rigid needs. Surprisingly an artic with a 45 foot trailer is nimble as buggery in the turning department. They can turn in their own length, so a wide two lane road is often enough to spin them round. Rigids have the turning circle of an oil tanker ship. It’s all about 3 point turns and such. Easy when you know how, I don’t even think of it in the car, but when you have no idea what size you need or how it’s going to turn, it’s nerve wracking. I’m constantly scared witless I’m going to get stuck and won’t be able to get out.

My one consolation is, if you zoom into that image above, there’s a bin lorry down the end. That is their day job, driving down those streets, amidst those cars, day in, day out. It’s do-able, it’s just I don’t know how.

To summarise, the job is as good as all the good bits suggested. You have a fixed start time, you can stick to your home time, if they try and give you a second job that takes you 5 minutes over your 10 hours you just refuse, nothing said. Today is my first of three off, which I *know* for damned sure are my days off, no last minute ‘phone calls telling me to get in. There is no pressure on the job, you are given your jobs for the day, your keys, and basically left to it. No-one calling you up and screaming at you for not being at your next drop, and there is an hour’s, paid, dinner break.

The downside is: rigids, poxy little, hard to get to, drops, a bit of a faff wrestling cages around. And having to tail lift all the stock down, and empties back up is *so* slow.

Oh, also they are Safe System Of Work mad. Not that that is a problem, I quite like that they have a system whereby no cages can fall off the tail lift, or roll free when you are off the truck, but it is slow. This is part of the adjustment process though. You are not going home for 10 hours, no matter how quickly you get the job done, so just plod on safely.

If they are as good as their word, and I’m not sacked and get some help, this could be a decent job. 90% of what I don’t like about it is simply that I can’t drive rigids. If I can get over that, this job could be brilliant. I passed my class 2 (rigid) test, so I must have been OK with the bastards once.

At the moment I’m taking it as it comes. If they help me out and I get comfortable and confident with rigids this could be an excellent job, if they reconsider and sack me I’ll get an artic job and never look back.

Right, off to Halfords to get some paint. The next two days I want to get my bike back together.