First off, my dream job at the Co-Op.

It turned into a nightmare.

The hours are great, the money was great, they treated you great, but all the stores were on the very edge of what is physically possible. Previously my satnav would say “turn left” and I’d look into a tiny back street, lined with cars, and think “jog on” and find the proper way into my drop. At the Co-Op that is the proper way. I had to go down a street stopping and folding car wing mirrors in all the way down as it was the only way I could fit. I was a nervous wreck. It got too much and I quit. *sigh*

That was on a Saturday, I signed up with an agency for a postal driver job on the Monday. They looked at my history, Stobarts, would you work there again? Absolutely not. Next? Meh. Bookers?

I joined 3 agencies earlier in the year trying to get back in there. Not a sniff. That is the best job I’ve had, but I’d kind of given up on it, as I thought they must have stopped using agency. Here it was, serendipitously being offered! I said I’d love to go back. Said I was available from Wednesday. They ‘phoned me that night, saying they had a shift at Bookers Tuesday, did I want it? For Bookers, yes. That was that. 5 days for the last 3 weeks. They also do Herpes, so I’m thinking I may have dropped in perfect here. If there are days when Bookers don’t need me I can do a shift at Herpes. This means I can afford to wait it out until they finally give in and take me on. Then it’s megabucks. £40+K.  For a piss easy job, no pressure, no deadlines, great attitude towards driver error. My first or second shift back there they sent me to Birkenhead. It’s tight as buggery. You have to drive into the yard, right up to the wall, spin it around on full lock (which kicks the back end out and a few drivers have taken out the fence it’s so tight) then go back out and blindside in around a corner. After the Co-Op it was a walk in the park. But in screwing it tight around one of the leads from the truck to the trailer must have snagged and it ripped out. I ‘phoned it in. They called me a dick, had a replacement sent out, not a word said when I got back. No forms to fill in, no investigation. Shit happens, don’t do it again. Now I take my lines off before I go into the yard. Sorted. The only thing with this job, as with every other driving job (not Co-Op) is you don’t know your start or finish times day to day.

I’m still battling with the bike. I rebuilt the engine (nearly bust my back humping the damned thing back in the frame) and refitted everything.  A job made a lot worse by my prevaricating over starting it because I was scared of the job. I got it all back together, reinstalled all the electrics and turned it over. It turned fine but didn’t start. I checked for fuel, (yes) sparks, (yes) right spark plug lead to right spark plug (for timing, yes) bugger. Had to be the timing was out. I took the cylinder head back off (all in-frame from now on, YAY!) and turned it over. Valves not moving. It was that thrice damned bevel drive. I was scared of that before I started, never having dealt with one before. After a bit of examination it turns out the shaft that drives the bevel (that operates the cam shaft) had fallen down. This is down to a circlip. While refitting I tried to put it on a wider part than that for which it was intended and prized it open too far. I was already aware of this and ordered the part as soon as I buggered it. I’ve been waiting for it to be sent from Germany, who, it transpires, had to order it from Japan. As soon as that arrives I strip the top of the engine, fit it in the right place, with the timing set again, and job should be a good ‘un.

I hope so, because whilst window shopping for a cheap winter bike (told a guy at work about my woes trying to tart up the engine after winter corrosion and he asked what I was doing riding a nice bike in winter, why didn’t I get a £500 winter bike?) I’ve stumbled across a Chinese website. They are selling clone motorbikes. They get a popular model of bike. tear it down to it’s nuts and bolts and slavishly copy every last detail. Then they set up a production line of Chinese made, *very* cheap clone bikes.

They are doing Harley clones. The Heritage Softail Classic is £16+K from Harley. The clone is £2,480, brand new, in a crate, shipped all the way from China. 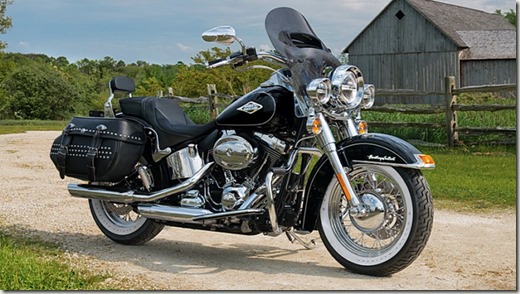 I want it so bad I can taste it. This could be perfect for me. Even the fakeness could be a positive. It looks like too much of a lump to get down between the houses to our garden and a real Harley would be stolen before I’d got my leathers off if I left it on the front. I’m going to get a laminated sign saying “This is a fake, Chinese copy, £2,480 brand new off (website) so don’t bother nicking it, it’s not worth shit” , or words to that effect.

My plan was to add it to my my collection but Wendy, perhaps not unreasonably (bloody unreasonably!) says as I can only ride one bike at a time, and we are still in debt, I have to sell my bike to buy it.

This means I have to finish this rebuild, polish it all up and flog it. Double quick time.

The other big news is I’ve finally got my parachute course done.

I finished work stupid o’clock Saturday morning, had 4 hours kip, then up and drove to the Lake District (right next to Morecombe bay). I was there from 08.30 until about 16.30 doing the course and finding out all the interesting ways I could die. The main thing we learned on the course was that it’s a waiting game. For students the wind speed has to be 15mph or lower with ground visibility (no clouds below 3,500 feet) and such. In short, we weren’t going to jump yesterday. So I had to do another 160 mile round trip today. I was sat there waiting from 09.15 until about 14.00 then they called us  out. We went up, I was last man out. They got the first 3 out then more cloud came in so they aborted. Landed. Gutted.

About 16.00 we had another go. I was quietly confident that I could do it. I’ve faced death quite a bit and don’t let it deter me. Then it got to my turn. You’re sat on the floor, facing a roller door which the instructor pulls open when the plane is in position. You look out and it suddenly gets very real. Then the instructor says “FEET OUT!” and you slide into the doorway, a hand on the door frame behind you, one on the lip of the opening upon which you are sat, one buttock hanging over the edge.. Which is really frightening because you think you are just going to keep going and fall off. Then he says “GO!” and taps your shoulder and you have to push yourself off, into the void.

As I say, I’ve faced death quite a bit. Riding through two overtaking lorries at 120mph, sitting listening to bullets going off in the fire in front of me, crashing every bike I’ve had, going to war, etc etc. I’m not trying to say I’m heroic, “stupid” would work equally well, I’m just saying fear and possible death don’t stop me from doing things. With that in mind, sliding up to the aircraft edge and pushing myself out, I was fucking terrified.

I surprised myself with the level of fear. I was wondering, as I sat waiting for him to open the door for my turn, whether I could do it. I was so scared I thought I was going to bottle it.

I pushed off, then next thing I was being snatched back by the static line to my ‘chute and then my ‘chute opening. When shit started making sense again I was back on the ball. Checked my chute, did the drills, steered it in nicely. But for that 1 or 2 seconds I totally lost it.

If the weather is nice I’ll have another go next Sunday, see if I can get it right!

You are not allowed to take a cam up with you so no pics, but it was a hell of an experience.