My biking obsession is driving Wendy to despair. But I’m sure she’s sharing my joy, really. Deep down inside. Well hidden. Behind a smokescreen of rage.

It was just an awesome, full-on, loony machine. There was no ‘potter around’ setting. You were either committed or parked. It still sounds fun. In real life that’s great for dry, straight roads, terrifying in the wet at roundabouts.  It’s probably just me, never having had a race bike before, but it was just too much. Being a V twin 1000cc the power didn’t build with the revs it just kicked you in the arse as soon as you touched the throttle. I couldn’t feed it in. I was in two minds about it. I’ll never own a bike that awesome again, but if it’s that bad in summer, imagine riding it to work through winter? I was on riding on eggshells as it was. The tickover problem decided me. The (£60 p/h!) Suzuki specialist mechanics said it would need an engine strip to find the problem, possibly thousands of pounds.

I was going to sell my CB750 as well. Put it through the MOT before the insurance runs out on the 21st, and it failed. Of course it did. Back brake disc worn, pads buggered. Also advisory on chain. I remain in a state of flux over bikes, so I pulled the ebay listing, ordered the disc, (already had some pads) and chain and sprocket set and was going to keep it. I’m finishing off fitting it today when the rain stops.

Then I came across an MCN review of the Honda VFR750 from the 90’s.  “For many, bike journalists included, the best road bike ever built.”

MCN don’t mince their words. (My favourite being a review of a supersports bike “Goes like buggery. Just as uncomfortable.”) That is a breathtakingly audacious statement.

Apparently Mr Honda had the idea that a V4 engine was the future, rolled out the first generation of bikes, but they were flawed, “chocolate cams”, cams kept buggering up. So it was either scrap the whole V4 concept and accept brand humiliation or redesign it as the most wonderfully over-engineered, bullet-proof, benchmark legend ever to be built. Honda. Obviously they redeemed themselves.

MCN: “A Honda PR man once (fairly) famously joked that “I don’t care how much a VFR costs, it’s worth three times as much.” He’s not far wrong.”  “For a Japanese superbike, the VFR is about as good as it gets. Build quality is sublime, reliability… is total. Don’t let high mileages put you off: VFR head over 75,000 with impunity…”

I was looking to try it out and if it’s as wonderful as they say maybe get the new version (VFR800) some way down the road. Wendy, who is sick to the back teeth of me fucking about with motorbikes, said I should just buy the new one. I priced a 2014 (latest model) bike for £6,500.

I went so far as to arrange a loan. Then I bottled it. It’s one thing to run old bikes, buy and sell, possibly crash, but £6½ K for a bike I might not like? That was just adjusting to the V4 engine. The V twin was instant, uncontrollable power. This one will potter around at 30mph all day quite happily. Then you rev it and away she goes! I’m a convert. The thing about Honda’s is the perceived blandness. They aren’t seen as idiosyncratic, or quirky, they just do the job, quietly, efficiently, safely. After the TL I can now appreciate that. Two days into ownership and I was chucking it into roundabouts lower and faster than the TL. Because the power comes in smoothly and predictably and the brakes work without spitting you off, I can ride it properly. I had to tiptoe around the TL.

This one isn’t my final bike. The shocks need sorting front and back, and the previous owner had it professionally lowered. It’s a bit short for me. But this is definitely my final choice for model.

I thought I’d test out the claim that it was a 600 miles a day comfortable bike. On a whim I rode down to Camborne in Cornwall and back yesterday. 700 miles. She’ll chug along at 90-100 for hour after hour, effortlessly, then go like stink for an overtake. The tank is good for nigh on 200 miles before the warning light, (and it has a petrol gauge as well! First bike I’ve had with one. Brilliant for peace of mind.)

I wouldn’t say it was the comfiest bike I’ve ever had, the old Honda CX500 takes that prize, but it’s tolerable. After 700 miles I wasn’t in as much pain as riding the TL 100 miles. Also the TL only had a 90 miles (motorway) tank, about 80 miles commuting. Crap.

I probably did it wrong, to be fair. Here to Cornwall with one stop for fuel, wander around an hour, then one stop on the way back.

Here’s the one I want. Whether it will still be there when I’ve got the cash is another matter. Still, one will come up again. 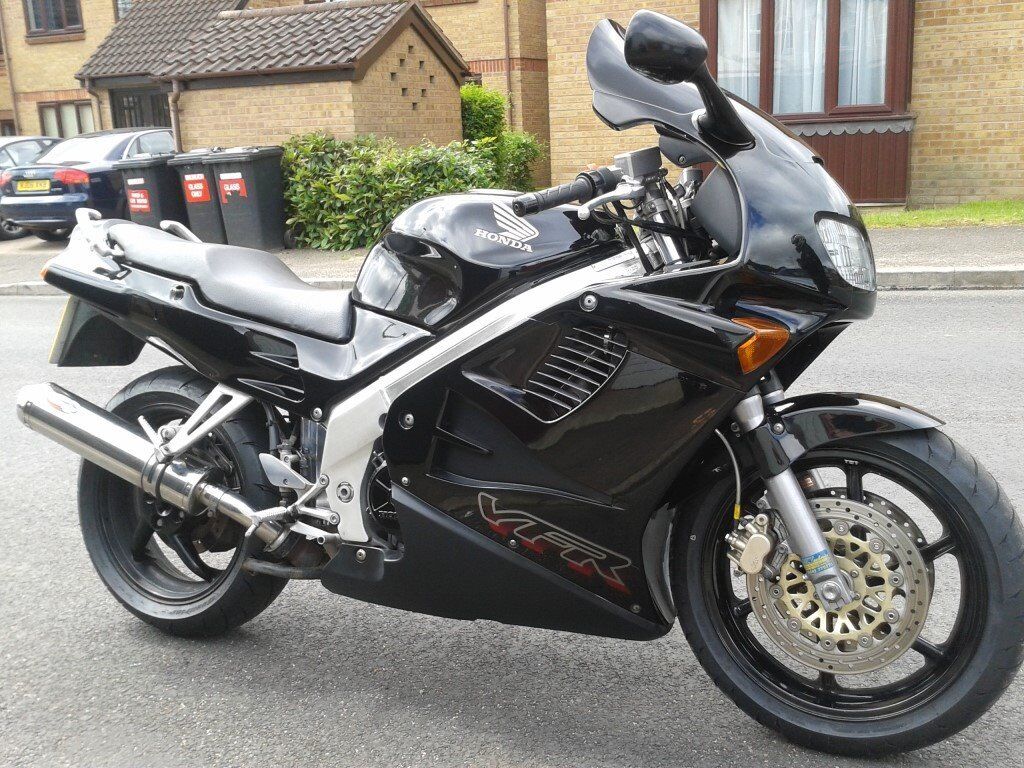 It’s got a full service history, the upgraded shocks front and rear, braided brake lines, the bigger screen and it’s not been lowered. So basically everything I want on mine.

Pity it’s not red. Much as I love black for everyday things, it’s a scientific fact that red ones are faster. Wendy was unaware of the fact. Basic physics, that.

Right, this is just me ranting about bikes. I have to tell someone and Wendy reaches for her gun every time the B word comes up.

PS, Fitted the chain and sprocket set (after ordering a new bolt for the front sprocket which snapped off rather than undo) and tried to adjust the brake which was seizing on. No joy. Tried to move the whole caliper across and that bolt snapped off. *blubs*

I’m selling it spares/ repair. I’ve totally had enough of this shit. Also put the VFR up for sale with the brake pads unfitted. I’m not buggering another bike up up trying to fit them.

*This* is why Wendy wanted me to get a new bike; so I can never touch it. She may have a point, actually.

I’ve got both bikes up for sale, the CB750 has already sold, 4 days to go, just got to wait and see how high the bidding goes. Hopefully someone will buy the VFR750 as well. I’ve emailed the guy over the pristine one above. It’s a 19 day old advert, so I may have missed that boat. If so, it takes the pressure off at least. I’ll wait for the next spot-on one and bank the cash.