It was the reverse! I failed on the first exercise, before I’d even got out of the gate of the test centre. I said I wasn’t getting it, and I bloody well wasn’t. To rub salt in the wounds the examiner and my instructor both said I had it lined up perfectly to go in the first time, but to me it looked all to bollocks so I took a shunt (which is to drive forwards try reversing again). I ended up needing three shunts, you are only allowed two. Fail. Apparently I also stopped short of the bay, but you are allowed to get out and check (if you haven’t already failed and can’t be arsed), and I dinged a no entry sign with the back of my trailer on the way out for good measure, but it was on the blind side and couldn’t be seen from the cab so I didn’t notice and neither did the examiner. HAH! Score one for the Buck.

Then I did an hours drive around an unknown course, with some hideously tight corners that took all my skill and every inch of the road to avoid crashing, and would have passed on that part. I got eleven minor driver faults. You can get fifteen and still pass. That might sound skin of the teeth, but I didn’t make one serious mistake. Not forgetting that on my fourth attempt at a rigid, after forty four hours driving, I passed with fifteen driver errors! That was skin of the teeth!

The minors are just little things, one he got me on was when he told me to pull in on the left. I checked my mirrors, indicated when I knew I was safe to do so, then pulled in. I got a minor for not leaving a few seconds between indicating and moving in to the side. I’d checked it, it was safe, but it didn’t give Dolly daydreamer time to wake up and notice the signal. So minors are inevitable. There’s always room for improvement. When you are juggling the amount of information you have to be constantly processing, slight errors will creep in.

If I could have nailed that bloody reverse I would be waving a class one license about now. Damn and blast.

To remain positive; I now know that if I can suss the reverse manoeuvre I can pass on the road. That, at least, is a huge weight off my mind. Also, I tackled some hideous corners, sight unseen, on my own interpretation of them. This is what I need to pass an employers assessment drive. I more or less know the usual route my works take you on for an assessment. All the bits of it that filled me with stark dread a week ago I now know I can negotiate.

I’m taking another four hours on the 31st of March, hammer the reverse and refresh myself on the road, then retaking my test on the 1st. So, Friday the 13th and April Fool’s Day. How can I fail?

I’m off for a nap, didn’t get sleep till gone twelve, three twenty four I was wide awake worrying.

PS I’ve added a picture of a rather fine example of the kind of chop I want when I finally do pass, get a driving job, pay off my debts and buy a garage and a garden with a house. If anyone is impatient, all Harley chops gratefully received. 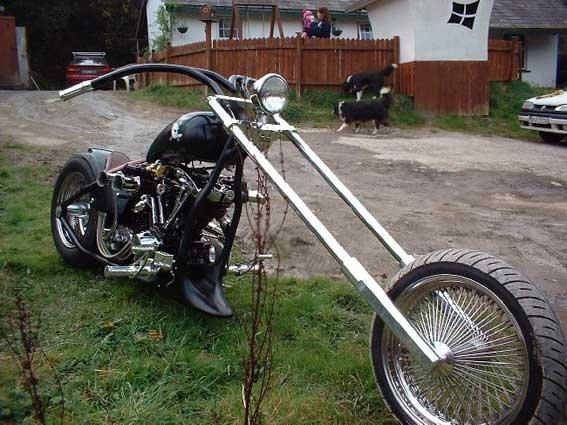