I refer, of course to Bishop Berkely’s philosophical argument that we can only be sure of the existence of matter as and when we perceive it. More commonly thought of as ‘matter doesn’t actually exist’ and Samuel Johnson’s legendary reply; kicking a rock and declaring ‘I refute it thus’.

A seconds reasoning shows it doesn’t actually refute it, but a clever and witty spontaneous reply, none the less.

Anyway, I’m here to refute, or at least argue.

I have started to follow Adam Baldwin (the American actor who plays Casey, a comedy fascist, in Chuck) and the links he posts are moving me to reply. Either he is keeping in character or Casey was type-casting.

He posted a link to an article which had a cartoon of a stereotypical yank hick sat on the porch of his ser-then plantation house, whilst other white, suited types picked cotton in the field. The suits were labelled tax payers. The hick was saying something like ‘ we’ll look after you, provide you with health care’ etc. and it was entitled ‘about slavery’. The accompanying article said that Obama was good for at least making people decide between freedom and Socialism, or freedom and slavery.

Right, where do I start? The implied, if inverted, racial dig at the cotton picking blacks? The pejorative, closed question that states if you have any form of social conscience you have no freedom? No, lets start at the beginning; the slavery jibe. If it wasn’t for people with a social conscience there would still be slaves. Business is never going to say ‘tell you what, why don’t we enshrine your rights in law, ensure a minimum wage and your right to get a different job if this one is too shit.’

The slaves never have a voice and business will not cut it’s profits. It is up to the free and empathetic, those with a conscience, to stand up for those forced to live on their knees. 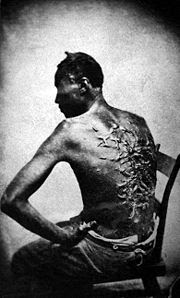 Here is the proof, from 1863. Some poor yank got the shit beat out of him

This is what business always wants, an expendable workforce bereft of rights.

Then there is the matter which seems to be causing this polemic disingenuous waffle, the matter of public health care. Thank (non-existent) god that I live in dear old Blighty, where the ideal of a national health service is at least an aspiration. To think that someone would kick up a fuss about the thought of the poor having a minimum safety net of health care! Capitalism in such a crude form, in a nation that professes to be Christian, is disgusting to me. Economic Darwinianism is a fallacy, one that invariably leads back to slavery. If all ‘men’ were ‘created’ equal, and on a level playing field, then perhaps one could ascribe lack of financial security to laziness, and promote health care Nazi-ism as a form of incentive.

As neither of the above pre-conditions are close to being fulfilled, the conclusion does not follow.

A chap with learning difficulties, born into a family of under-class dole wallahs, who is expected to leave school/ jail early and scam his life on benefits and crime is in no way equal to a really clever kid born into a middle class family who expect him/her to go to university and beyond.

The fact that kid A is not likely to amount to much in financial terms doesn’t mean his/her life is intrinsically worth less. Or to put it another way, as a guiltless baby do we let kid A die of an illness because his family have no money?

So, to return to the nub of the point, are we nobler creatures if we look after the less fortunate or if we exploit them for our own pitiless gain?

That’s all I have to say about that.

Then he posted a link to an article which claimed that the data that suggests global warming is a fabrication.

I honestly can’t think why anyone would claim that.

I found myself like Mulder when Scully makes claims based on her belief in Catholicism. He is willing to consider any possibility, however far fetched and statistically unlikely, if it is grounded in the physical universe. Yet he is dismissive of her ‘faith’.

I found myself in the same boat over this. I don’t know all the evidence but have a blind belief in science and the scientists.

It is just incredible to me that the overwhelming scientific consensus (except, until recently in the States) should be made up. Why? To what end? What do all these disparate scientists gain from it?

There is obviously an answer to the inverse, why do the deniers deny? To what end? What do they gain from it?

There are reports from sources as diverse as holiday companies not being able to let the holiday makers off the boat at the pole (forget which one) for a walkabout because the ice had all melted, Alaskan houses subsiding because they were built on stilts onto the permafrost which has started to melt, polar bears becoming a nuisance around northern townships because they can’t find enough ice upon which to hunt, etc. On which note, I don’t think anyone who saw David Attenborough’s documentary with that poor polar bear swimming for miles because it had no ice upon which to hunt, then in desperation attacking a walrus (or sea lion) colony and getting battered, will soon forget it.

The point being, the evidence seems to be all around us, (freak weather everywhere, melting icecaps, etc) and the only ones who stand to lose by us combating it are the big polluters. i.e., big business. Back to my point about slavery, if we give the capitalists free rein everyone loses. They are never going to say, ‘if we cut our profits by half we could eradicate emissions.’

Take the legendary GM electric car scandal, up and running, ahead of it’s time, recalled and crushed with the patent sold to an oil consortium.

My point then is; there are massive interests in promulgating denial of global warming, there is no coherent scientific/ business gain from stating there is warming.