The T.A. Physical Training Instructor gave us all a brief before we left. He made a point of going on about buying decent trainers for running as your knees take an immense battering. At the time I was scornful. We used to do all of our running in Boots, Combat, High.

O.K., so we had a lot of shin splints, and I tried to get Premature Voluntary Release because the pain in my knee was so unbearable, but that was 20 years ago and mainly forgotten. Besides, it was character building.

I thought I was being a bit precious running in my old, flat soled, unsupported trainers. 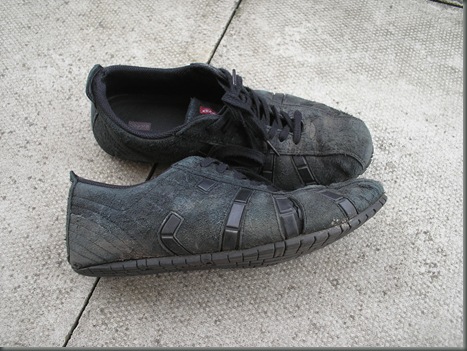 As you can see, not really high tech running shoes. I bought them whilst practising Taekwondo so I would have some lightweight footwear, the better to kick people in the head. As running shoes go, not really fit for purpose.

Before I went to the T.A. assessment weekend I bought a cheap pair of Asda trainers, so I would have not-scruffy footwear in case the army was being sniffy.I wore them once, didn’t like them (I thought they were rubbing my toes) so never actually ran in them. I was looking at them earlier in the week, considering what the PTI had said about lots of padding on the heels to absorb the shock on the run. They fitted the bill so I went for a run to try them out.

Revelation! The PTI and I were both right! It felt massively more comfortable running in trainers with padding and they rubbed like a bitch. 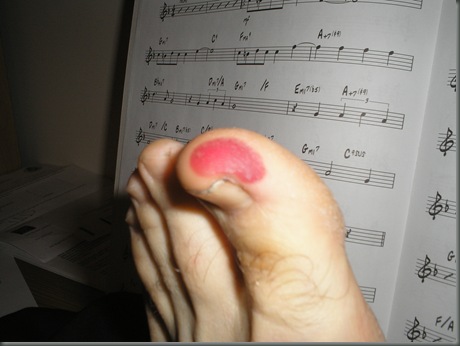 Yesterday, being a day’s holiday, I went up town to the a sports shop. ‘Give me proper running shoes now Mr trainer pimp!’ I went in and my heart sank. The whole of the back wall of the shop was given over to row upon row of trainers.A myriad of different styles, presumably for different purposes, most I suspect just for Chavs to flash labels. Woe onto the Buckster. I was envisioning the scenario; ‘I want some running shoes’. ‘You must get these, here fill out the mortgage repayment plan, you’re so down with the Chavs.’

A mild sense of panic was setting in as I wandered up and down the row. I ended up at the end of the section, as that was where the assistant was. She was serving some chap, so I looked on bewildered, like a stereotypical chick in a car showroom ‘ I like that one, it’s black.’ Anyway, this chap was umming and aarring, trying on different styles, sizes, half sizes etc. In short, he seemed to know what he doing.

In desperation I said to him ‘you’re not a runner, are you?’

He was! He’d just done the Manchester 10k, and was off to do the Glasgow full marathon! Joy! I asked him what I was supposed to be looking for in a running trainer, he said ‘Aasics’ or ‘Balance line’. “Anyone who’s anyone in running gets Aasics.” Spot on!

As soon as he got served I tried on the trainers he chose(£75, but if that’s what it takes….), but found them a little constrictive, so I tried on a cheaper pair (a ‘mere’ £45) and they fit like a glove.

I went for a run as soon as I could and even with tired legs from running the day before, and the above blood blister it was still wonderfully comfortable on my feet. I even knocked a minute off my run time! 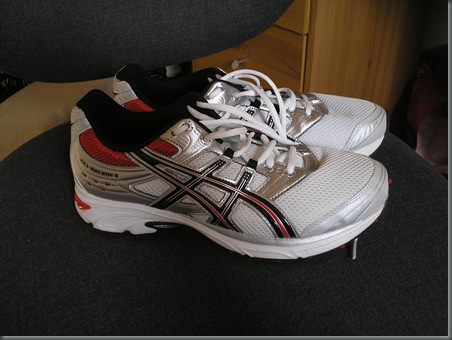 O.K., they are not black. And they are a bit in-your-face blinged-up Chav chic. But they are so fit for purpose!

The observant amongst you (I pluralise, optimistically) will have noticed I said yesterday was a day’s holiday. ‘’surely not, Bucky’ I hear you cry, ‘a random day off in the middle of the week?’

Yes. My reasons were four-fold. I initially wanted the day off because I had an interview for the Tesco’s warehouse job. To which I went (got lost, was five minutes late. Standard procedure, then.) Started off the interview on the wrong foot as well. The interviewer asked ‘so why Tesco’s’ I replied, ‘Because of your fleet of trucks, start in the warehouse, maybe move over to driving’ he said ‘the logistics are done by Stobbarts for Tesco’s’

Not sure I want the job if offered, it will depend on their attitude towards my T.A. stuff.

Reason two; I rang the doctors again on Monday about my blood group test. Again. Got put on to the nurse who had taken my blood the week before. She said she wasn’t sure about the procedure, or who to contact so she was going to  talk to the practice manager and leave a message on my home ‘phone. I got in from work, checked, no message. Rang the surgery, the receptionist said they are not allowed to leave messages on answer machines due to patient confidentiality, and it was the practice managers day off! Got a bit miffed, said the nurse didn’t know her arse from her elbow and that the army wanted my blood group last week!

She rang me back an hour later, just as I was settling down to an afternoon nap (I’d had three hours kip the night before, so was feeling it) to say they had sorted it, but the nurse was only in Wednesday and Friday mornings. When I was at work. I said Wednesday in the hope I could get my holiday approved. She said to come in at 9.50 (I wrote it down).

Went in yesterday at 9.50, she said “What are you doing here? We rang you yesterday to tell you to take the form to the hospital. And your appointment was for 8.50.”

By this time I was, luckily, beyond anger. I just laughed incredulously. She said whilst I was here they’d fit me in. So I had my blood taken. Again. Now I just have to wait and see if it works this time. I’m paying £10 for the privilege.

Reason three; Wendy is working four days a week now, with Wednesday off, so it was nice to have a day off together.

Reason four; I hate my job and any day away is worth taking.

Today is my day off. The sun is shining, all is groovy. Got to do the shopping, maybe go for another run, price up a tattoo, sax lesson this afternoon, Kung Fu tonight. Apart from the shopping, all good stuff.

Oh, a chap on twitter pointed this out yesterday

Which led me to this sublime hundred seconds;

The lesson for today is ‘(Aasics) trainers good, boots bad’.