Since I went away for that weekend to play soldiers everything has been up in the air. I have been having the same postal conversation with them over a form they sent me, requesting my employers details. Four times I’ve sent it to them. First by email and post, then by email twice more, and finally (I hope) by post again. The thing I failed to notice when my emails replies were coming through, was that the army’s firewall software had read my attachment as dubious and quarantined it.

Hopefully that is sorted now.

At first I wasn’t worried, I had loads of time and there were other matters to sort out first, ID card, documents, etc.

As the weeks have rolled by I’ve been getting nervous. Work are saying that there are only a few holidays left to book before October (but I couldn’t book any, in case I couldn’t get the desired dates and had to change courses) so they were going to be less than chuffed if I announced with days to go (it’s about 25 days until the start of my first choice course) that I didn’t want those two weeks after all, give me some others on fully booked dates.

I got a ‘phone call on Friday of a Staff Sergeant responsible for recruit training saying I’d ‘slipped through the net’ and that he was going to make me his ‘personal project’. Apparently he’s going to email me tomorrow with all the course dates and will make sure I get whichever I want. Just email them back to him. That seems to be sorted.

Which means I can try to book some civvy holidays now. Get on to that tomorrow.

I got my tattoo done. It has come out a lot better than I anticipated. My favourite response being ‘Radical tattoo, dude. Kudos’ from someone on Twitter. That made me smile! 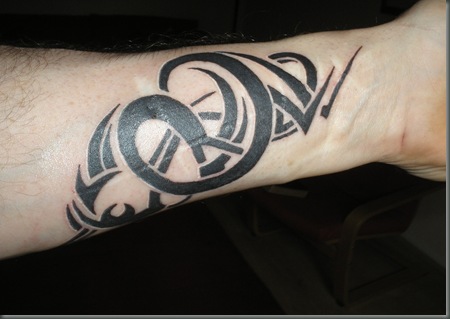 It’s looking better and worse now. Not as black and shiny, but less taught.

It’s been itching horribly for two days but thankfully that seems to being easing off now.

The other thing I’ve been doing of late is getting into running.

Another chum from Twitter is a keen runner, (doing the Glasgow half marathon) and she’s been giving me some top tips and encouragement.

Then I got my funky new really lightweight running top so decided to take it for a longer run. I set out, passed the 3.5 halfway mark and kept going to another landmark. I got there (after twenty minutes running) but was that shagged I had to rest for ten minutes before forcing myself to run back. That was horrible. Worse, when I worked it out on the google-maps-and-a-piece-of-string (patent pending) it was only 5.2 miles! I was gutted! That meant I ran a shorter distance, not extended it. 2.6 miles, collapse!

The next run was on a cooler day and I did it there and back. Forty two minutes.

So the next long run I extended it further. 7.2 miles, fifty seven minutes.

Unfortunately I gave myself a sever blister within the first ten minutes which promptly burst. I tried slapping cream on it and wearing two pairs of socks, managed a ‘short’ run of half an hour, but that has made it worse. I’m resting it until it has healed properly before I start again. Research has shown that I should wear two pairs of thin socks and kick my heel into the back of the trainer before lacing properly. This should prevent further blisters.

My plans now are to; heal, get a good programme going (with a hiatus for a week prior to army training) then run the Warrington half marathon on the 3rd of October. If I’m still into it, going to start some hill work, then enter the Windermere marathon next year. A full lap of Lake Windermere! Cool!

So, things are happening at last! Yay!