That was a Black Sabbath quote, btw. Ozzy Osbourne? 70’s rock legend? *sighs at the yoof of today’s want of culture.*

Anyhow, Iron Man; I finished my first half-marathon on Sunday. It was epic!

It lashed down the whole time, parts of the course were flooded, others (due to the bloody hills they managed to find in Warrington) were more like streams. I seemed to be labouring up stream for thirteen miles. By the end of it I felt like a salmon on its spawning run. 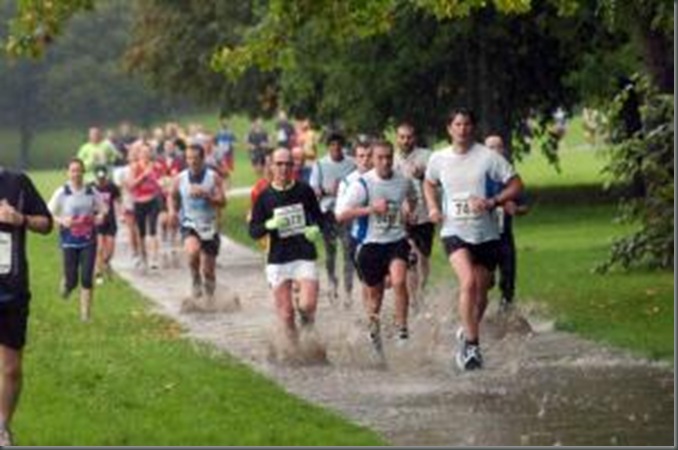 Lo-res, but you get the picture, as it were.

So, cracked the half marathon, in 1:43:38. Not too shabby for a 44 year old unfit duffer’s first attempt. Two days later, convinced that I was now a top athlete, I set out for an hour’s run. I had decided to do better, so was after knocking a minute a mile off my time.

My legs were done-in for the first mile, had to force them to work, got into a ‘quick’ pace, then flagged almost immediately!

Ended up running 4.5 miles(in 30 odd minutes)! By the time I’d finished my legs felt like they were made of wood. I did knock 20 seconds per mile off though, so not all bad.

Then I started thinking that I needed something more challenging. Thirteen miles! Ha!

Then I stumbled across Iron Man. An endurance triathlon.

You swim 2.4 miles, on to a pushbike for 112 miles, then finish it off with a full (26.2 miles) marathon run. Obviously that in itself is a bit too easy, so they have time limits for each section, and stage it around the hills of Bolton to give you a bit of a workout.

As soon as I saw it I realized that was it; my new challenge. I have given a name to my mid-life crisis, I call it Iron Man!

There are a few obstacles,  such as being a crap swimmer. I have never been competent, and don’t think in my swimming ‘prime’ I could complete two lengths. 2.4 miles equates to 154.4 lengths of a (25 metre) pool! Nor have I actually been for a swim in about 15 years.

Then there’s the push-biking. OK, I can ride to work and back (which is 11 miles when worked out accurately) but 112 miles, after a swim, at race pace, around the hills of Bolton is a different kettle of fish.

The half-to-full marathon step up is said to be easier than the 10k to half, but even so it’s quite challenging.

The thing is; as soon as I started considering it I got a buzz of nervous excitement. As Mal said in ‘Firefly’  (the series that preceded the epic film ‘Serenity’) “We have done the impossible, and that makes us mighty”. That’s how I feel. It’s next to impossible, the challenge would be heroic, but if you succeed…., that would be mighty, indeed!

The thing I don’t understand is; everyone I’ve mentioned it to has said things like ‘it’s stupid’ ‘you can’t do it’ ‘you’re too old’ etc. No-one has said ‘hell yes, that sounds awesome, I’ll train with you!’

So here’s the plan; it’s my day off on Thursday, going to do a distance ride on my pushbike, get a benchmark time/ fitness assessment. Get down the baths see how many laps in what time I can actually manage. And I know my benchmark run time, 8 minute miles (which I intend to get down to  7).

Find a training programme and go for it. If it is looking at all feasible, I have the entry money (£325!) and there are still places available I will try and get in the June 2011 race, if not 2012.

Just heard off someone on the forum for the Warrington half marathon, that there may be generic extreme triathlons. If so I’ll do the cheap one!

In the words of the ‘Dead Ringers’ Kirsty Wark , “more on that story later."