I’ve got my super new Boardman bike. I’ve swapped the tri bars over from my old bike, which has now been reassigned to the role of work commuter. That’s 55 miles a week on a heavy bike further weighed down by panniers, waterproofs, pump, lights et al. Got to be good for easy muscle building/ gradual stamina building.

But that’s old kit. Not exciting at all. New kit, my lovely Boardman bike!  Finally! 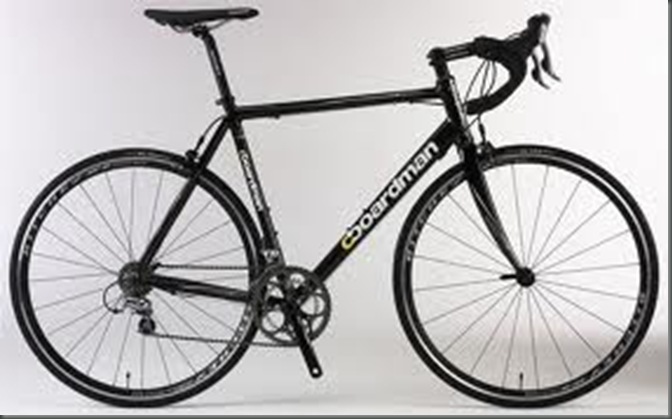 The picture doesn’t begin to do it justice. Even if it weren’t all blurry. I spent ages viewing different websites and comparing the specifications and relative merits of different bikes before going for this one. I went for it because it was the best for the price Halfords did, and the cycle2work scheme was run by work exclusively through Halfords. But when that was in doubt I asked the seasoned push bikers and triathletes on Twitter for suggestions, and this still came out top spec for the money. So I got it. The one thing I wasn’t expecting was for it to be so damn pretty! The pictures, even the good quality zoomed in one on Halfords site (which I can’t seem to steal for here) don’t do it justice. The tyres are tiny, the wheels have that tapered ‘filled-in’ jobby going on to aid the aerodynamics, the gear changes are by twitching levers on the brake levers and the handlebars are sublime. Old racing handlebars were just a U on it’s side. You angled them down a bit so you had a slightly lower/ further forward racing position. This inevitably meant you slid into the bottom of the U and were very uncomfortable. Boardman have given you three brilliant riding positions, on top of the bars, resting on the rubberized tops of the brake levers, right down on horizontal bottom bars or crouched with your hands resting comfortably on a flat diagonal section, Obvious, once you’ve ridden it. One of those ideas that are so simple and perfect you can’t believe they ever did it any other way.

It is light as feather and in all ways lovely.

The keen eyed amongst you will have noticed the want of pedals and mudguards in the picture. This I fixed. I got some fancy ‘cleat’ pedals (the ones that lock your feet into the pedals, much to the amusement of many as you fall sideways at traffic lights!) and some lightweight ‘barely-there’ plastic mudguards.

Thus equipped, I then needed to buy the specialist triathlon trainers which fit into the cleats. That will be another £90. Kerr-Ching! 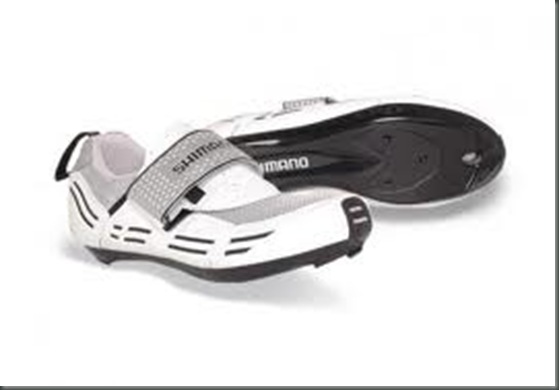 The three holes in the soles accept the screws for the cleats, which in turn wedge into the pedals, locking you in. Also you might notice the big hole under the toes. This is so you can hop out of your wet suit, pull the one velcro strap tight (the shoes having been left in situ in the cleats) and cycle away, all the water draining out of said hole.

That’s a couple of minutes saved, not stopping, drying your feet, putting on socks, putting on shoes, and mounting your bike. In theory.

This is all good and well, you say, but what of the different time limits on the disciplines? How, oh how will you ever keep track?

Observe the cunningness of design. Note that it has the ability to take lap times with the split button. Also you can have it run a stop watch and two countdowns! And it has ‘Ironman triathlon’ written on it! Yeah, baby!

In other news I’ve joined that gym and not found it wanting. The machines are tres cool! Each running machine and each cycling machine has it’s own monitor, upon which you can select your preference of TV channel (my taste running to ‘off’, but that’s just me!) They also have speed monitors on the treadmill, and resistance settings on the bikes. You can set the treadmill to say 10 miles, age 44, weight 149 pounds, set the speed and off you trot. It gives you a break down of speed, time and calories burned.

All very cool. Then I noticed it has a function that picks up your personal heart rate monitor. Had to get one. £36 and I have this; 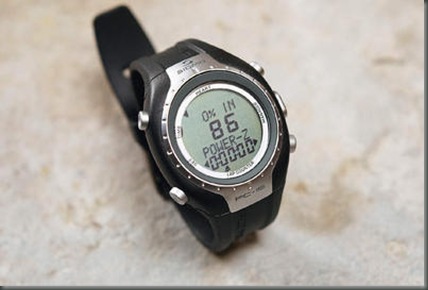 It is the watch part of it. There is a chest strap with a transmitter that comes with it. And a rather nice idea of mount for the watch for on the handlebars of your pushbike. Having fitted the aerobars there isn’t room on mine, so just have to wear it.

It was described in the right up as a good basic piece of kit (Ha! I’ve still not figured  out how to use it properly! Basic my arse!) and a good training aid.

I went to the gym today to try out my latest toy. I hadn’t worked out the zones, or how to properly work my watch so was just watching meaningless numbers really. According to my  marathon training programme I was just supposed to do a 6 mile run today, but I thought that was a bit of a waste of time so threw in a fairly high resistance 10 mile push bike ride as well.

I started on the bike machine at about 138 bpm, which I quickly pushed into the 140’s. Sweat was streaming off me, I have to drape my towel over the machine to stop from sweating all over it. Put in a good effort and knocked off the 10 miles in  just under 38 minutes. Straight on to the treadmill, where I thought if I was doing a short run might as well make it a fast one. I was running 8 minute miles before I started at the gym, but to get the half marathon in 1 hour 30, you have to be running 6 minute, 48 second, miles. So I put it at that and went for it. My heart rate rose through the 6 miles from 148 to 155. Still just numbers. I slapped the speed up to a 5.5 minute mile pace for the sprint in, and my bpm went over maximum. I thought it was just being cautious because I’d strayed into zone 3. Nope, I’d spent virtually the whole hour and 20 minutes in zone 3 (“The training in the Power-Zone is very intensive and should only be performed by trained individuals” and then gone beyond!

Gotta go, so sayeth the Wendster.