I know, I’ve already covered it; it was stupidly hilly, uneven underfoot, hotter than a chilli in a microwave, and we  had to ford a stream, so ran the last eight or so kilometres with soaked, very heavy feet.

Now though, I have the race statistics!

The last 3k were some of the worst of my life. I forced myself to keep going, but the preceding hills/ mountains had taken everything from my legs. I did that last 3k on stubbornness alone. And my fancy race number holding belt/ sports gels holder failed me. Two of my gels escaped so I had to ration myself and hope I didn’t get an energy crash. Luckily they were giving Kendal mint cake out at two of the drinks stations. Still, an added worry I could have done without.

I have been on the official photographer’s site and bought these as a memento; 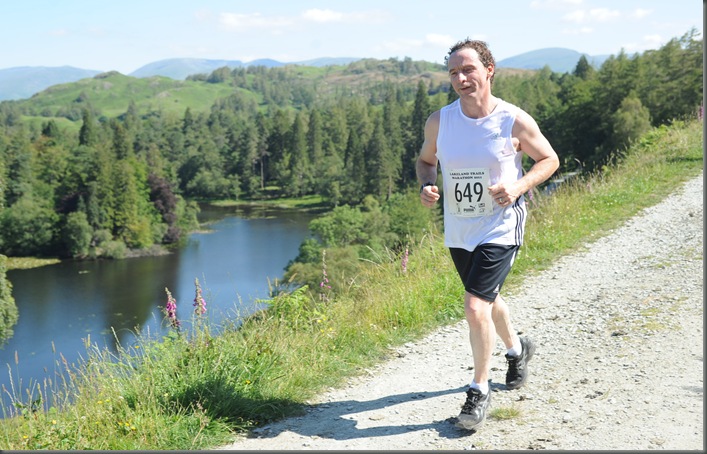 Whilst this is the best of them, I don’t like how it looks like I’m walking. That was just after another killer ascent, it had levelled off and I was starting to get back into a rhythm. I had seen the photographer so was trying to attempt a smile. Didn’t quite make it.

This one shows the kind of focus, and indeed pain, involved in the hill climbs: 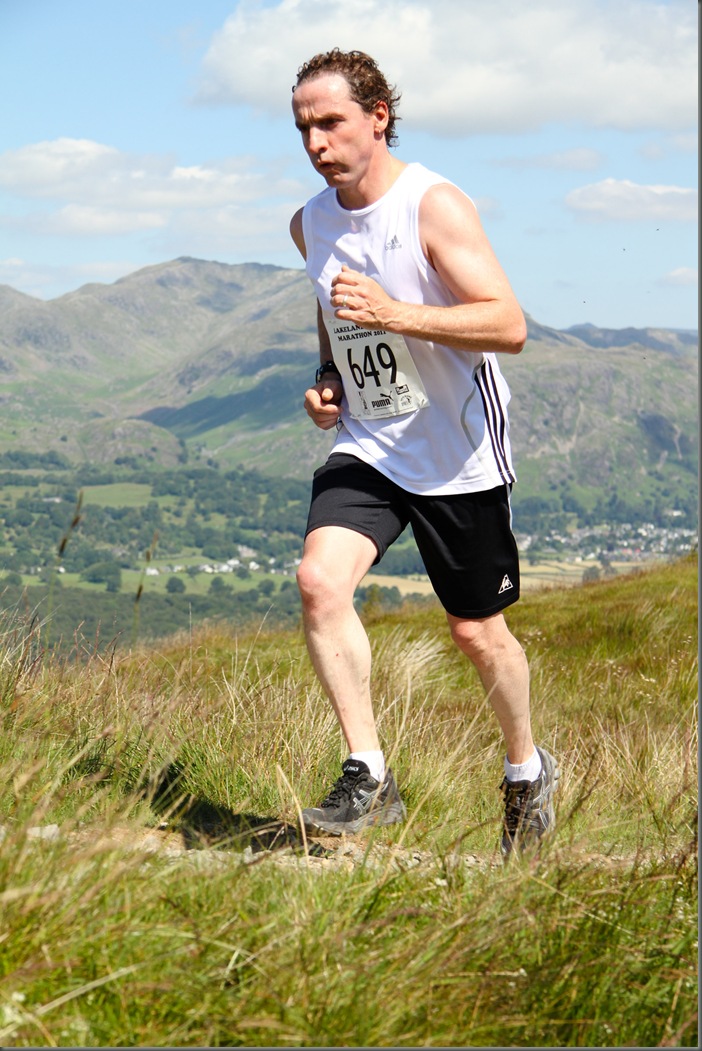 Observe the feet, toes just touching on trailing foot, front foot in the air. That, my friends is running, not walking. I don’t like the shot though, because my face looks funny. I look like I have a duelling scar running down from my lip! Odd. On this one I was too tired and too focused on just not dying that I couldn’t spare a thought for the photographer.

The last one is of me crossing the line: 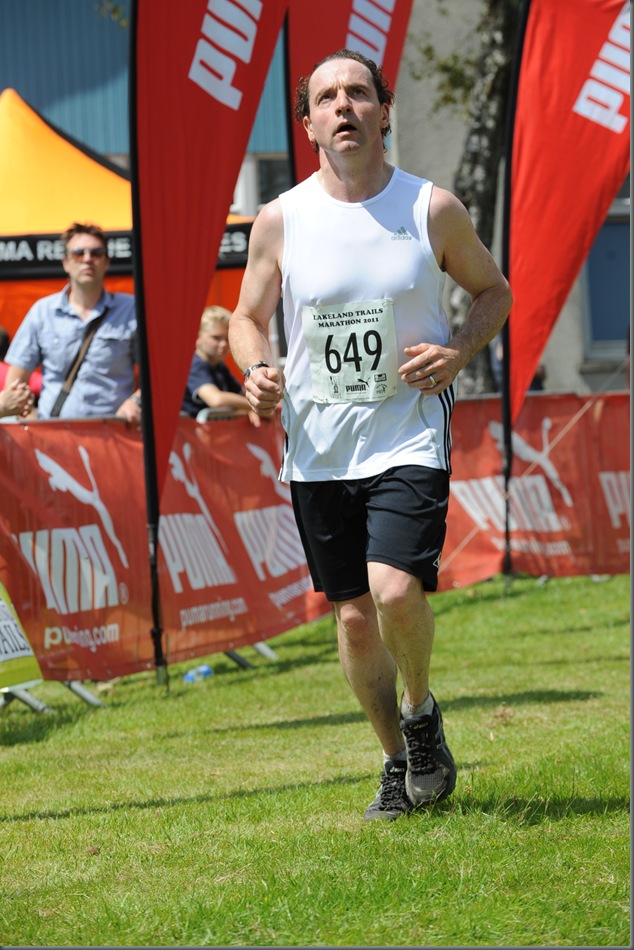 This shot is ruined by the fact I hadn’t seen the photographer. You pass under an inflatable arch with ‘finish’ written on it. I was staring up so I could turn off my stop-watch as I passed directly under it, thus getting an accurate time. The photo’ doesn’t show that. If someone was to put a caption to it, it would probably read “God, why have you forsaken me?”

I was stiff and done-in for about four days after that. I was having to walk down stairs like John Wayne walking across a bar

Seeing as the weather was nice today I decided to do a quick ten mile-er. To make it a little tougher (and because I’ve only just stopped peeling on my forehead) I wore my running baseball cap. It’s supposed to be thin and light enough to wear on runs, but I am a bit crap about the heat. It kills me. Anyway, wore it today for the full ten (10.1, to be precise) miles. I was on for seven and half minute miles on the way out, but on the five miles back I slowed to eight minute miles. Poor. Even with the hat I was hoping to get closer to seven minute miles.

It’s only 12 more days until my Outlaw! Shitty, shitty, shit, shit! Not flapping, not flapping.

In other news, it’s only 3 days until I do my assessment and (if that goes well) interview for Eddie Stobarts. I told them on my application form, “I have no professional driving experience”, but they still got back to me. Twice before I’ve applied to them for different jobs and they turned me down flat by return of email. The driver at work who put me on to this particular Stobarts job said there was a driver in our yard a few weeks back who was crap and had only had his license two weeks, but he was working for Stobarts. I stand a chance!

With irony aforethought, we have just started the new rota (Woo-hoo!) where we get every other weekend off. I’m bound to get this new job now, working lates/ nights and every weekend!

If they offer it to me I’ll snatch there hand off. Beggars can’t be choosers and if it gets me on the ladder without having to piss about with the army, then all is well. Watch this space.

Right, I’m buggered. Because of that run (and relishing the schadenfreude, the demise of the evil Murdoch empire is evoking on Twitter) I’ve not had my afternoon nap. May have to kill the neighbour yappy dog before I can get to sleep though.