After the wag-n-drag fiasco I was quite relieved to get a nice easy job for my second outing. Trunking an artic down to Chelmsford, trailer swap and drive back. How hard can that be?

They wanted me at the Wigan depot for 7.30am. Then they rang back and said make it 9, as they wouldn’t have the trailer loaded. I got there at 9, then sat there for an hour and a half while they loaded the trailer. Slowly.

In which time I tried to familiarise myself with the truck, a MAN, which I’ve never been in before. I did what checks I could then sat around for a bit. I got bored and sat around for a bit longer. I set to trying to adjust things; the seat height, firmness, and fit. Then I thought about moving the steering wheel to a better position. There were no obvious levers or buttons so I started prodding stuff. I saw a lever so I gave that a pull. The steering wheel didn’t move but the lever was dangling down, obviously not right. I had a look to see what it was. It had a pictogram of the front of the truck with a movement arrow arcing downwards.

Oh shit! I thought I’d pulled the cab release lever. I’ve seen pictures of the cab tilted right forwards (so the mechanics can work on the engine beneath) I thought that must be how they do it. Shitty shit. I was jumping up and down in the cab, trying to get it to re-secure, walking around the truck to see if I could see any way of doing it, nothing.

I went on Twitter to see if any truckers were on, they were not.

I was panicking a bit. Thinking that as soon as I hit the brakes the cab was going to flop forward and I’d crash and die and probably get sacked.

After half an hour’s hyperventilating the shunter drove around so I grabbed him. Turns out it was the lever to release the front grill of the truck, much like a bonnet release on a car! The steering wheel adjuster was a button on the floor.

So, a less than great start to my day.

When my trailer was ready the shunter helped me out, realizing I was a clueless newbie. Which didn’t do me any favours as you have an acronym to follow (BLACK, Brake, Legs, Airlines, Clip, Kingpin) with him doing some of it I wasn’t sure where I was up to.

I set off, relieved to be out on the road. A nice easy run, about 6 miles of good A roads until the motorway, then motorway all the way until 16 miles from my destination.

As soon as I hit the M6 it was stop/ start traffic all the way to Birmingham. Bloody Wigan were playing at Wembley, it was a Bank Holiday weekend and it was lashing it down. None of which is conducive to free flowing motorways.

From Brum it was good going until I hit the South East, all of which is apparently under construction. Mile after bastard mile of narrow lanes and average speed cameras. The latter is not a problem, you just set the cruise control to the desired speed. The truck was an automatic so it was just a matter of steering really. The former is more challenging. Narrow lanes in a truck the size of the whole lane is …focusing.

I made it. It took me ages due to traffic, but at 5.50pm I was literally three streets away from my destination (the satnav,  not recognizing the address, had taken me close then dumped me!) when the office rang me and said the store was shutting at 6pm, they wouldn’t keep it open, could I drive to Tilsley (30 miles from London) and park up in one of their yards, then make the delivery in the morning!

Joy! I hadn’t brought any overnight kit and had wanted to be home for 7.10pm to watch the new series of Doctor Who!

I had a poor night’s kip, then set off at 7.30 back to the store. I made it without incident. I looked around for the trailer I was supposed to be picking up when I’d dropped the one I was carrying. There was none. I had to help them unload my trailer. Two bastard hours it took! Trunking my arse!

All went swimmingly after that, all the way back to Wigan. I was actually in Wigan, less than a mile from base when it went wrong again. The satnav said turn left, I did, but a road too soon. Had to extricate myself from a poxy little side street with cars parked along it in a feck-off big truck. Not good.

Here is a snap of my wheels (taken on my cheapo Asda ‘phone camera, so poor quality) 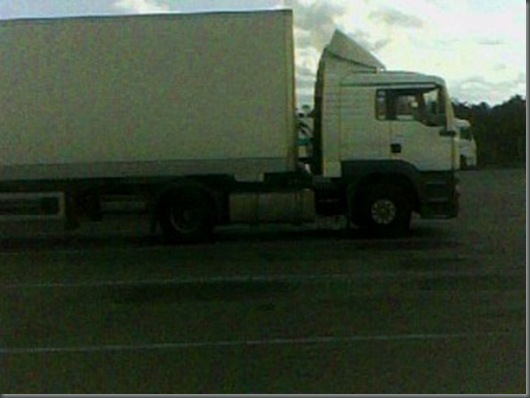 When I got back into the yard the transport manager was there with the shunter. When I’d finished putting it on a bay he said to uncouple the truck. I got out to do BLACK, but the manager was stood there and he said ‘drop it down. Oh you have already’ He was stood next to the trailer legs and they were touching the floor! I thought I’d driven all the way to Chelmsford and back with my legs down! I was horrified.

It wasn’t until this morning at work, when I showed the lads my wheels on my ‘phone that one of them said ‘your legs are up, there.’

He was right! Massive relief! The manager had dropped my legs, he was on about dropping the back end of the truck (so you can get under, and out from under the trailer). Bit of a mistake on my part, but nothing like the HUGE mistake driving with my legs down would have been.

All in all, it’s a learning curve. As long as I can avoid doing anything massively stupid while I’m ironing out the niggles, I should be alright.

I’m thinking about handing in my notice at work this Friday. Just get what driving I can with the agency, then re-apply to Stobbarts in a month. In fact, I’m pretty much sure I’m going to hand my notice in. Yay!