Bleeding typical. The job I didn’t want I passed the assessment, the job I desperately wanted they said I was ‘borderline’ and needed to get another month’s experience and try again. He said it was not a ‘don’t call us, we’ll call you’ sort of deal, and that he wanted me to come back and drive for them, just with a little more experience.

Stuff like me not knowing where anywhere was, being rusty with a manual gearbox (I think that was my second go of a truck that wasn’t automatic since I passed my test, 2½ years ago! I’d have soon got fluid at it again.) and being ‘nervous’ (on an assessment for a job I was desperate to get, FFS!) particularly on the reverse. Bloody right I was. They said the assessment was all about safety. I thought it would be better to be slow and sure. That is too nervous. Screw that! I’m not risking crashing.

The only faults on the road were that he reckoned I turned the wrong way at an offset, blind junction. As I couldn’t see the road to my left I turned the cab to the right, so I could see out of the left hand wide-angle mirror. It’s a small mirror, but sufficient. He reckons I should have turned the cab to the left, which would have blocked the traffic from the right, so I could physically see the road.  I’ll do that next time.

The only other thing was approaching junctions carrying too much speed, he reckoned. I don’t agree, but he’s the assessor.

If I’d have had a good knowledge of the roads and not been nervous, I think I could have swung that. As it was he just saw me as a quivering wreck who had no idea.

I pulled myself together and emailed an application off to another agency the same morning. The next day I got all the class 1 trunking jobs off the jobcentre and applied for them all. All agencies. All desperate for drivers. Until you apply.

That’s two weeks with no work now. Things are starting to get worrying. We’ve got enough in the bank to last another month or so before we have to really fret, but it’s surprising how quickly you start to lose your self confidence. And self worth, for that matter. Work is a strange master. I think it’s some perverse form of Stockholm syndrome.

On the bright side I’ve had plenty of time for other things, such as getting back into training and my instruments.

I’ve been for a few swims whilst I rest my knackered leg up. I’m struggling with that bilateral breathing, not my fave. Still,. all that chlorinated water I’m drinking must be doing my teeth the world of good.

I took my lap counter for my second swim, the day after my first when I was still stiff. I managed two lengths (about  two minutes)  under 1½ miles in an hour and three minutes. Which is roughly an hour and three quarters for 2.4 miles. About where I was. And that’s taking into account my stiffness, lack of training, and trying to learn a bilateral breathing technique. Can’t say I’m too disappointed with that.

The instruments are coming along swimmingly. (You see what I did there? Perhaps I should get a job as link writer. “That was Cooking With Anthony Worrel Thompson. Talking of thieving bastards, next up it’s the Tory conference.” Hmm, it’s a thought.) Anywho, back to the plot. The instruments.

I’ve finally caught up with where I was on the sax. Blowing some fair attempts at complicated tunes. Not to any standard of adequacy, you understand, but good enough to show I’m making progress. Now I’ve finished the “muppet’s guide to saxophony”, and know which end to shove in my mouth nine times out of ten I’ve hit a bit of wall. I picked up the next book to hand and went back to what I was trying to master before the hiatus, (Rhapsody in Blue) and find there are all trills and stuff that I have not learnt how to do, and am expected to know. Balls.

I want to keep the momentum going this time so I’ve ordered a book of ebay, it’s supposed to take you from picking the instrument up,  through to improvising for jazz. It’s a four book omnibus. I’m hoping I’ll just be able to read and play straight through the first book of it.

Also I’m half way through the “Learn As You Play Clarinet” book. They are excellent books. It’s the same as I was told to get for my sax. Not as much fun as some of the others but more rewarding. Irritatingly the upper range of notes on a clarinet are the same fingerings as the lower ones, but for different notes! On a sax you play the note, if you want it up an octave you just hold the octave key down as well. Don’t know if that makes sense. Take my word for it, the clarinet version is a pain in the arse.

Not as bad as Wendy’s piano though. Having two sets of music going on, one for each hand, and one being written so notes in the same position are actually representing different notes. That batters my head. Wendy is banging away at it though. She put in two hours today while I was forcing the misery-stick into submission.

I mentioned the piano on Twitter before we got it. Said I’d soon have it mastered, white keys, black keys, how hard can it be? My mate replied “Stevie Wonder can do it and he’s blind. Must be a piece of piss!”

I think I’ll stick to my woodwinds. It’s a lovely sound, mind. If both sets of music were written so the notes meant the same thing I’d give it a go. For now I’ll leave it to Wendy. And Tate.

Before I go, have to share this, laughed my arse off; 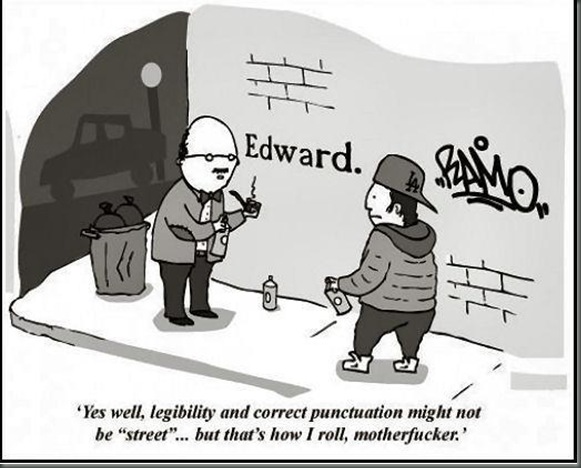