You know how in my last  but one blog, of but a few days ago, I was waxing triumphant of my mastery in my chosen trade? To whit, I felt I’d cracked the driving gig?

Wednesday I was doing my the same run I’ve been on for the last couple of weeks. My last drop being in Northampton. It’s a nice big yard, but the bay you have to reverse on is the to the far left of the yard. This means, when they leave trailers parked in front of it, you have to reverse in blind side. It’s exactly the same principle, except you can’t lean out of your cab window and see where you are going. You have to do it all in your offside mirror. The problem with that, of course, it that it leaves you without any depth perception. You are reduced from binocular vision to a flat, reflected field. When your arse end is over forty foot away this is less than ideal.

So I was blind siding into this bay, the last one in the yard, trying not to run too far and park it over the pavement running next to my bay. I went tight around a parked unit and trailer (it would have been too easy if they hadn’t parked that there as well. Grrr.) I bottled it, thinking I’d gone too tight, so pulled forward again. As I did so I clipped the parked unit’s wing mirror with my trailer.

I didn’t break it, or even scuff it, but I turned the mirror around on it’s post. This loosened it so it had to be fixed. The yard manager saw it and made me fill in an accident form. I think he was pulling a fast one, to be honest. One of the lads took the back off the mirror and fixed it while I was there. Then the repair guy came out, had a long talk with the manager and buggered off. I think it was a conversation on the lines of ‘lets bill the agency guy’s lot for a none existent repair and split the cash’.

Probably not, but I was miffed.

I went into work on Thursday (my lot had gone home by the time of the accident so I didn’t get to tell them on Wednesday) and the boss was so concerned about me being a potentially dangerous driver he said I’d have to do a driving assessment on Friday. Meanwhile, here’s the keys, do the same run again today.

Go figure, as the colonials would have it.

This is why I am an agency driver; because I flap terribly on assessments. If I can carry on driving without ever having to take one I am not going to put myself through it. As soon as he said that I was gutted. I started planning what jobs I could apply for next.

I had to go in early yesterday (Friday) to take the assessment. I was flapping a bit. The assessor said ‘Here’s some keys, go and get the unit that’s easiest to get out.’

Neither of them were. They were wedged in tight. I had to move other trucks just to get the bloody unit out in the first place. By the time I’d negotiated that without crashing I was settled. Nothing on the road was going to be as bloody awful as the yard. I had a bitch to the guy about how bad the yard was, saying “Assessment my arse! If you get out of the yard alive that should be a pass.” He agreed.

Anyway, long and short of it is, I passed! Go me! Wasn’t expecting that. Then I had to carry on a do a full day’s work after that. I just wanted to go to sleep. You know how it is, when you are all stressed out then suddenly are relieved. Long day.

The agency texted me saying I’m back in all next week, so it’s business as usual. This run is longer hours as well. And better (still not great) hours. From 11.30am until finish, usually about 11.00pm. It gives you most of the night in bed, but no free time, and oddly still quite tired. Possibly because of the caffeine all day, and trying to get a natural sleep after it. We’ve been off the Nytol for a week now. Still not great sleeps, but better.

I’ve decided to keep my hair at it’s current length. Apropos to nothing. Shorter is crap, longer it makes me look half bald, strangely.

Here is my current ‘do’. 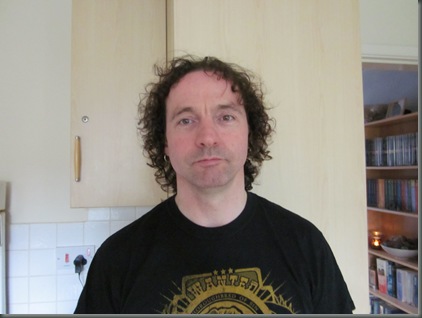 I was going for ‘I ain’t no square with my corkscrew hair’ (Marc Bolan) but a chick chum on Twitter said I look like a young Shirley Temple. *sigh*

What else? Well, I’m continuing to bloat out. My leg is still knackered so no running. I am turning into a stereotypical trucker lardarse. I’m going to try to get to the doctors on Monday morning before work. It’s either that or go for American citizenship.

That compound bow I was going on about, on ebay? The one I bid on then realized it was collection only, from Essex? I won it. *shakes fist at arbitrary yet vindictive universe*

I’ve had a fun few days with the seller. He was going to report me to ebay, and all sorts of messy things would have ensued. I offered to pay his ebay fees so he could relist it without losing out. He said if I hadn’t paid for it by end of play Thursday he was going to offer it to the next highest bidder and report me. I said I’d pay the difference between my bid and the next highest so he wouldn’t lose out. (It was £39, I bid £45) He said OK, then replied, “I’ve sold it for £15, the difference is £26. (In retrospect my full maximum bid mustn’t have got used, so it sold for £41, a difference of £2). I immediately thought he was taking the piss. He would have sold it for lots more than that and was trying to fleece me. I said I wasn’t paying that, I’d pay the £6 difference between my bid and the previous highest bidder and that was it. He said “That seems fair.”

Cheeky bastard. I wasn’t having any of that. If he’d have took that to ebay they would have had a record of exactly how much he had sold it for.

Anyway, the rabbits remain safer. They would have been fairly safe anyway, I fear. The cows are displaying bovine indifference to their lucky escape, mind.

I’m about 3 months from a clean license (my speeding ticket drops off then) and I may have been stung this morning. Goddamn speed camera van parked over the brook of a hill on Cromwell Ave. I was doing (an indicated) 36 mph (allegedly) when I saw it. I stood on the brakes, obviously. They say speedos are set to read 10% faster, but that still leaves me at 33 mph for a few seconds. Damn and blast their eyes. Obviously the coppers coffers must be running low. Bunch of bastards. Yet if I was to petrol bomb the van and hack them to death with a machete as the tumbled out in flames, legally, I would be in the wrong. Call that justice? Police state.

I downloaded the fix for my Tomtom trucknav. Seems to be working again.  It’s no better than the navigation software Google provide free on my Android ‘phone, though. All that hoo-har over evilgoogle. They should just change their motto to “Come to the darkside, our kit is better.” Honesty in advertising, it’s the future.

Well, that’s been my week.

It makes sitting around doing bugger all a lot more fun though. And at least I have weekends off at this place. Could be worse. I could be in the sewer. Or even on the end of a skewer. As the bard said.

Right, I’m off to frantically do bugger all. I’ve split the infinitive again, the atom is only a matter of time. Then watch out, cop vans.