After the hols last week I thought the works or the agency had got rid of me but it turned out they had just lost my number (along with their mobile.)

Sunday evening they ‘phoned me on the landline and ruined my chi. I was quite looking forward to having Monday off. C’est la vie.

Bright side being, A: it gave me some wages, B: it got me back into driving. You wouldn’t think I’d need a refresher after doing it daily for six months, but at the first island driving away from my works I found I was approaching at car speeds. Not good in a truck. Then on Wednesday I backed into a barrier. Total bummer.

It was a bay tight against a wall with a barrier running alongside it. I’ve backed into it when there was a truck parked in the next bay, making it REALLY tight, no problem. This time I had about three empty bays to drive across then swing it in. The barrier goes in for a spell, then stupidly, comes out again. I caught it on the come out bit. Totally gutted.

If you can’t see where your arse end is, get out and look. Don’t think you can judge off the visible side. Stupid.

I’ll see how it goes. Give it another week at least to get over my nerves then maybe apply for another job.

I am really torn about that now. I want to go to a better job because, well, it’s better, but I don’t want to make any mistakes while I’m new. But that is two accidents here (turning that mirror around was hardly a major incident, but it counts as an accident). I don’t like it. I’d prefer to run away.

Yes, I am freaking out.

Not a happy bunny at all. Wishing I had a job that used my brain. Trucking is a great job when all is well but the slightest error and things go ‘SMASH’ and there is no undoing it. Why didn’t I study to be a heart surgeon? A job where you don’t get any complaints if you do it wrong.

In other news, the fitness side of things is really looking up. It was only five weeks ago (four weeks of cycling) that I started riding in to work. Admittedly it was with a bloody great painful rucksack, but my time was 45 minutes. I broke the 35 minute barrier twice last week! Chuffed.

I only managed four days riding last week. I found I had a flat as I was about to set off for work on Friday. I did a (relatively) quick inner tube change only to find the brand name (Raleigh) dearer tube I’d bought from a sports supermarket had a poxy small valve stem. It didn’t even poke through the wheel rim far enough for me to attach the pump. I was less than thrilled. I had to go in the car. In retrospect I am so glad it happened at home. If I’d have had an irreparable puncture on a long ride out and then found out the replacement tube didn’t work I’d have spat my dummy with some vigour.

Anywho, the important part about that tale is my minutes per mile stat has come down from 4 m/m last year when I was at my fittest, to 3m15s per mile. It’s only a sprint course, with no big hills but it’s undeniably quicker. Last year I settled for endurance, this year I want to build the speed as well. I remember as a teen that I rode everywhere in tenth gear, pumping the whole time, even up Frodsham hill. I recall my calf muscles were actually split into two distinct muscles. If I can keep pushing it, day in, day out, then I should be able to recover those honking great muscles. Get the muscles, piss the speed. That’s the plan.

Whilst I was on holiday gorging on clotted cream, pasties and rat poison I managed to put on five pounds. I’ve lost four and a half of them already. Yay!

Also I have had a hair cut today! At a proper hair cutting place. Go me! I think it’s about 30 years since I last did. I’ve shaved it off myself, had family to trim it, or just left it. They gave me a loyalty card. After I’ve had nine cuts the tenth is free. Unfortunately at this rate  I will be 315 years old before I can claim my free cut. Still, at that age a chap wants to look his best for the ladies. Here’s the result anyway. The same but shorter. 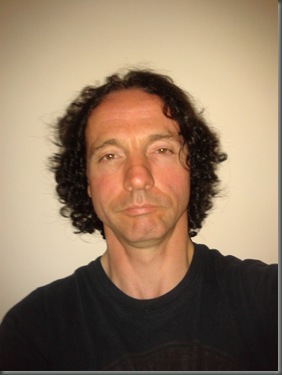 Excuse the squinty, cock-eyed photo’, the flash on my ‘phone is fierce.

The tan, regrettably, is if anything, understated. Running in Cornwall and riding to and from work have ruined my undead street cred.

Talking of running, my final bit of fitness news is awesome! Though I do (modestly) say so myself. You know how I buggered my leg with those ‘natural running’ trainers and basically couldn’t run for six months? Before the holiday I did four, 10  mile runs. One of them I couldn’t complete, I had to stop and have a breather. The other three were the very limit of my endurance and willpower just to keep moving after 6 or so miles. The times were disgraceful. The three I completed averaged at 9m 16s per mile. They started off, the first mile or so, around the 8m/m mark, but petered off to a Peter Kay ‘dad-run’ by the end.

After the week of running every day up and down the coastal hills of Cornwall I did my first flat Warrington run today. I felt epic! I could feel that I could push it. I ended up doing the 10.3 miles in 1h 20m. That used to be my OK pace before I knackered myself. Or to put it another way, my very best time for 10 miles was 1h 15m. Today’s run was an average of 7m 50s per mile!  That’s nearly a minute and a half faster per mile than pre-hols!

Honestly, I am really, really happy about that.

The gods had to mock me a bit on the run thing though. My new trainers came on Friday whilst we were at work. The delivery guy didn’t leave them at a neighbours or in the blue bin or anything, just took them away with him, said he’d redeliver on Monday (presumably when we are safely at work) so I had to run in really old trainers. The pair I bought before the cowshit pair. Not a problem, they still work, just not as well. I decided to run down by the canal as it’s scenic and off road. Also because the cinder and dirt path had been baked for a week so would be nice and dry. About four miles into the run, at the point when there’s really no point in turning back, it suddenly started to bucket it down. Ace. I was soaked. The dusty dry path turned into a puddle-fest. My trainers were soaked and heavy in no time. Then it started to thunder. Whilst I was alone in the middle of nowhere. Super.  Still, a good run.

The way forward is try to run often, include lots of hills where possible.

As ever I’m sure there were loads of things I thought of during the week to include on here, but I’m damned if I can think of them now. Again. I’ll have to start taking notes.

Well, that’s all for now.