My exciting plan to buy a cool car has suffered a set-back. Or three.

The Midget is still cool. In a dinky sort of way. I mean, look: 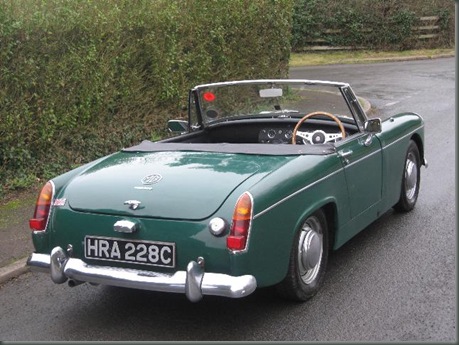 I started doing some research and narrowing down the options and discovered the model I wanted was a MKIII, (1275cc, 1966-1974) really good nick, under £4k.

Then I hit the snags. Even the bigging-it-up adverts were talking about ‘rolling restoration’. ie, never out of the garage and a money pit. Also they were saying that really they need to be kept in a garage. Whether that’s to prevent the rain getting in through the old canvas soft top or to stop them dissolving into dust (or both) wasn’t specified. The thing is, when you start bringing that sort of thing to the equation I begin to reconsider. I think it’s a cool car, but I want a car I can use. And I don’t have a garage. If it’s just going to be a posing, second car, (with a surprise garage attachment) it leads me to ask a more central question; “What am I thinking?”

When did I start considering a cool/ fun CAR? If it’s not practical, is a money pit, and a symptom of my ongoing midlife crisis then it has to be a motorbike.

So it’s back to the Kawasaki Bonnie clone. Just feast your eyes on this: 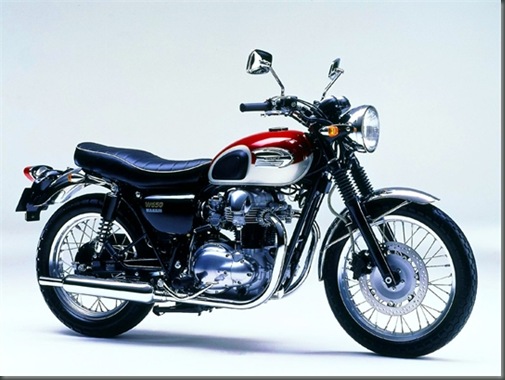 As someone said of an earlier Japanese clone; “as near as you can get to a Triumph without pushing it home at night.”

This is no longer true, as the rebooted, modern, reliable Triumph do their own Bonneville. Ironically the new Triumph is accepted as a reliable brand because they took a Kawasaki Ninja engine apart and used it as a blueprint. So I’ve read, anyway.

The thing is, if you are buying a retro bike it is obviously for the looks. The performance is going to be tepid, the aerodynamics are tits, the riding position  is unsheltered and, at any speed for any time bloody uncomfortable.

This means you are buying a bike on the aesthetic alone, if you take reliability as a given.

Why then, Triumph, are you fielding this: 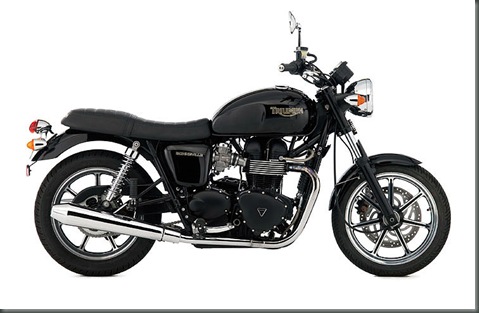 To the untrained eye the bikes might look similar so let me list the woes; observe the mag (magnesium alloy) wheels. Ughh. Cast a disdainful eye at the forks and notice the lack of gaiters (the rubber ‘Nora Batty stockings’ things). Where also are the rubber tank pads? What the very heck is that travesty of an exhaust end-pipe? Finally, and most importantly, what is that lump of crap you are passing off as an engine? It is an ugly, radiator cooled (as opposed to proper air cooled) offence to the eye. *pass the mind-bleach!*

They (Triumph) have done a nice stylistic makeover with the cafe-racer Thruxton; 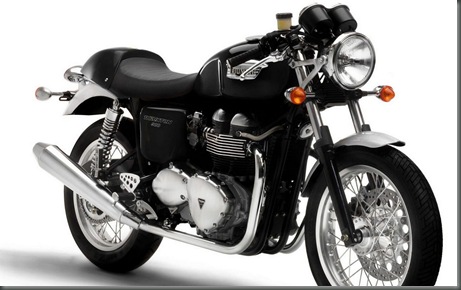 All of this was so that your working class Johnny could change his motorbike from a sit-up-and-beg riding position standard bike into a lay across the tank, speed-demon, cafe posing hero machine.

You have to state this is purely an aesthetic nowadays. I expect a 250cc race replica plastic-fantastic pocket-rocket could blow it out of the water.

The lesson here, then is that cafe racer is a cool style. So why not buy a Kawasaki and put dropped handlebars, rearsets and a seat hump on it?

It doesn’t have the Triumph badge is all. We’ve already seen that the latest incarnation of the Triumph company’s success is based on Japanese engines, so why not abandon the pretence?

I’d like the original Bonnie, but as we’ve seen with the Midget, you are starting off from a bad place (British built with stone-age tech) and then adding 50 years of decay.

So, my midlife crisis (Engine based, sub-division) has a new focus. Or rather it has returned to an earlier one. It will be mine.

Whilst not exactly my cup of tea here is a stunning Kwak cafe racer; 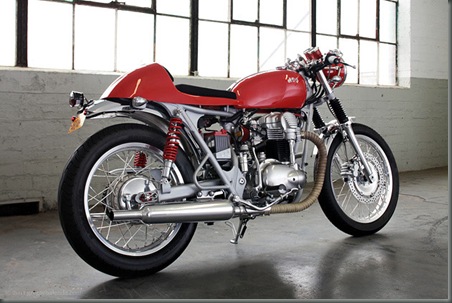 Seat hump, (I’ll say!) gaiters, peashooter exhaust, beautiful engine with kickstarter (kickstarter! Tres bleeding cool!) hub rear brake. Oddly he’s put some ugly downpipes on the exhaust and left the footpegs/ controls up front. Each to his own. But it shows what you can do with the right engine. Look at that (probably faux) pushrod casing! (the chrome pipe up the side of the engine.) Class.

Also, the Kwak has done the decent thing and got the engine the same as the original. Internally, I mean. Most Japanese four cylinder bikes fire four little bangs. ie, cylinder 1 (250cc) half a rev later, cylinder 3 (250 cc), 2, 4.Or some such. What you have then is a smooth, even power delivery which just spins up faster and faster. The old fashioned British twin had none of that. Two cylinders, both pistons going up and firing together (BOOM! 750cc right in your face) and a massive flywheel to spin them around again. I remember Les gave me a lift on his one time, the kick of power is brutal. Gimme!

I’m thinking next year. Spring thereof. Then the real test begins; have I finally learned enough common sense to not get banned/ crash? Everyone says my driving has changed beyond recognition since I’ve become a trucker. Slower, more patient. Also I am pretty careful about speeding (on the motorway). Excessively. The amount of unmarked police cars I’ve seen since I’ve been trucking is not true.

It’s not the crashing and dying bit that bothers me (never really has) it’s the loss of license/ livelihood should I survive.

So that is how I am currently filling the void where my soul used to be. With wanton lust for for a Kwak cafe racer.

In other news I did four days (bicycle) commuting to work last week. With the runs scheduled for the weekend I thought I’d best set aside a day for rest to recuperate. They say that’s the hardest bit of training, forcing yourself to take time off. As it turned out it was pissing it down (for a change) so I found it quite easy. My other thought was that would be the day I’d appreciate it most, as then I could dash home and start my weekend early. Ha! Once again the gods mock me. I was waiting for an hour and and a half for a trailer before I could even start, the motorways were bollocksed because of the rain and all those mamby-pamby want-to-live-for-ever sorts who slow down just because they can’t see for spray and are scared they are going to die (GET A BUS, YOU MORONS!) then when I got to my last drop their computer was down so I was waiting four hours and twenty minutes for them to load me. I ended up scraping in at just under a fourteen hour shift. Joy.

Yesterday (Saturday) I was pretty knackered then. In bed for 2.30am, sprogs out making a racket by 7am. I ended up just beating the garden into a semblance of order. My first proper gardening this year. The grass was so tough I couldn’t do it with the shears, I had to sharpen my bayonet and hack it down. Trimmed my box hedge and made started to topiary-ize some box and a bay. It looks tidier now.

Here are some things that popped up on Twitter for your delectation: 1, The Higgs Boson. As you know it is the missing link the scientists have been looking for, a proof of their other theories. The so called God Particle because of it’s importance to said theories.

Dilbert on the subject:

Then there were the Yanks (I assume) on Twitter when they announced they had finally discovered it: 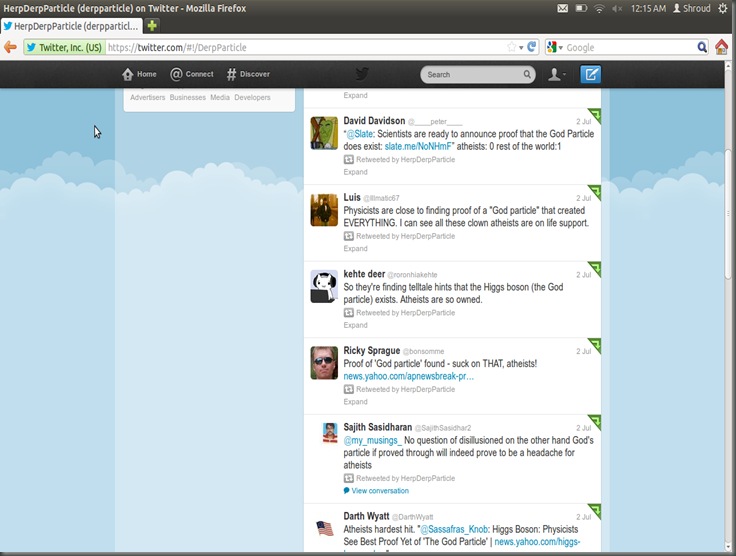 You shouldn’t laugh. But I did. Cruelly and vindictively. God-squadders. Not a brain cell between them.

Also someone posted a link to some images to restore one’s faith in humanity. Random acts of kindness. There are kittens if you want to check out the rest of it. (Here: http://www.stumbleupon.com/su/4dHAbS/www.buzzfeed.com/expresident/pictures-that-will-restore-your-faith-in-humanity?sub=1627910_374866 )

The one that got me was number 20, some guy going into the sea to rescue a dog that had fell in off the pier. The woman’s face. *chokes up, slaps self*

To clarify my earlier posts, I’ve not yet applied for that other driving job. As soon as we get back off holiday I will be doing. I’ve got regular work so I’m not too stressed either way, which is better for me. I don’t like assessments, I get too nervous. If everything is riding on the outcome that doesn’t help. This would just be an improvement, not all or nothing.

If I can get a regular trunking, morning start, better paid job then so much the better. But it’s not the end of the world. I can pass assessments now. I have regular work. I can do the job that is expected of me. Before I started this particular job none of that was true.

So the plan is: jolly hols, new job, spend a stupid amount on next year’s Ironman Bolton (This years was £425. For a race! I’m not buying Bolton. As opposed to £225 for the Outlaw, Iron-distance triathlon.) Hmm, looking at that I’m asking myself is it worth it? It’s a bit tougher bike course but really you are paying for the brand name. After I’ve just been railing against the uselessness of buying the Triumph badge. That is ugly and overpriced. Ironman is just overpriced. And I’ll only be doing the brand name event the once. Hmmm. Food for thought.

I digress though. An Ironman (brand name or generic) the Lakeland trials marathon, keep training for my end-to-end and take swimming lessons. Make ridiculous amounts of money, pay off the last bit of the card, save a couple of grand, buy the Kwak and cafe racer it. Plan.

Oh, before I go, have a giggle at this: it’s what happens if you go on to a roundabout a bit too fast in a truck. I laughed ‘cos it wasn’t me. (look behind the red Honda) 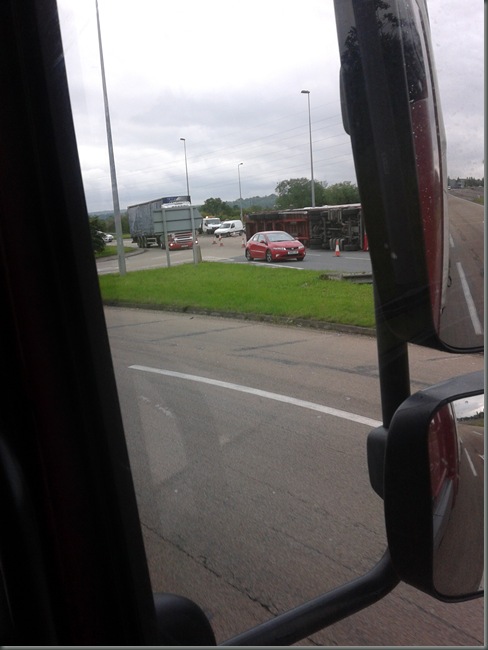 Apparently you can roll an artic at 12mph. A cheery thought whenever you feel it tipping in to a corner.