Pain is just failure rubbing salt into the wounds.

In other words, I’ve still not cracked the 3 miles in 18 minutes. The training schedule started this week, if I’m to fit it in to the races I’ve booked. ie, the big goal for the end of one week is a 10 mile race at a 6 m/m pace, another is a half marathon, etc. This week should have culminated with me doing a nice easy 3 miles at 6m/m.

I took two stabs at it this week. Both in the gym so as to give me a constant speed. Both times I managed a mile and a half then had to give up, half dead. The plus side to the gym is the constant speed of the run and not having to cross roads, the negative is the heat. By the time you’ve done the warm up mile you are sweating, then trying to sprint flat out… It kills me.

I then go on the exercise bike for a quick spin to break up the lactic acid in my legs. Even just a 15 minute spin at a reasonable level of resistance has the sweat pouring off me. I have to throw a towel over the bike to mop it all up. I’m already dripping from the run, any effort after that is sweat city. The heat!

That guy I met who was saying he ran the marathon part of the Lanzarote Ironman in 45 degrees! Seriously, screw that.

Anyway, tomorrow morning while it’s still cold, I’m going to take another shot at it. On the road. Anybody getting in my way is going to get trampled. I’ve got to do it. You know you’re giving it your best shot when you eye up an approaching transit van at a roundabout and think “you’re going to have to run me over ‘cos I’m not stopping.”

I’m looking at the training programme, the big goal at the end of next week is to run 12 miles in 90 minutes or less. Cool. I can piss that. I did a new PB on the 10 mile run of 1.09 that means I have 21 minutes to stroll the last two miles. Yes, just checked it again. 12 miles, sub 90 minutes. Cool. That gives me another week to to get up to proper pace.  The week after is 5 miles in 30 minutes! Back to the 6m/m pace. Oh dear.

Work is more of the same. I’m getting better all the time. I will crack that 90 degree reverse between two barriers in one attempt. They have cleared out a space at the front now, so you can get it more or less in position then pull forward to straighten it out, then reverse straight back. That takes the challenge out of it, though. Also, sometimes the shunters leave a trailer sticking out in front of the cleared space, so you can’t count on it. Once I’ve cracked this reverse and can do it comfortably in one go the lorry driving world will be my oyster.

It’s all about setting the reverse up. I think I know what I’m doing now. Now it’s just a matter of practice. Consequently, the reverses in the yard, which I used to struggle with, are no longer a challenge. The thing was, I used to try and reverse into the bays at an angle, having to guess where my arse end was on the blind side. Now I know it’s about getting it more or less straight before you reverse in. That way, even if you still can’t see your blind side arse end, it is not sticking out. You can drive  your wheels down an imaginary line beside the trailer you can see, knowing the blind side is safe.  This probably sounds like either utter gibberish or patently obvious. In theory it’s obvious, in practice it’s taken me a while.

To be honest, I’m a bit disappointed with myself. I’ve not really been committing to my training. It’s been windy and rainy and I’m usually running late, so I’ve not cycled to work all week. I only managed the gym twice in the week and I chickened out of going to Warrington Tri swim session again today. I’ve still not been down the allotment to extract my apple tree and fruit bushes, prior to letting it go. My sax-ing has been on hold while I’m on these shifts during the week and supposedly committed to training and I’ve not got back to the French since I had that week off. And I’ve still not filled out those visa forms. And I have to get an accountant.

Oh god. Now I’m disappointed in myself and massively stressed to boot. That is a huge to-do list. And most of it is stressful. Hence it still being on my to-do list, not my totally-done list. The smallest list in the history of metaphor.

Right, enough is enough. Sit myself down tomorrow and arrange a list then get all of the above done. Then they’ll be done, not adding links to my chain (like the ghosts in A Christmas Carol) of stress.

I don’t know if you are aware of the workings of said, but I’ll assume not as no-one follows me on there. Anyway, one of the features is hashtag #. If you put # before a word of phrase everyone who want’s to can see it. Say you were watching some goddawful reality tv show and you wanted to know what everyone else thought about some talentless brain-donor fodder, you’d simply put #XFactor and et viola. Like a cry for help, real time. Though to be honest, a lot of it is people who hate whichever show it is, and just want to rip it to bits, which I’ve previously shown can be really funny.

I digress.  There was an epic PR fail this week, when Susan Boyle’s publicist launched #susanalbumparty.

I forgot to mention it, but just before the American elections, Joss Whedon (all hail the Whedon! We are not worthy, we are not worthy!) posted this “endorsement” of Mitt Romney.

Every time anyone claps Ian Duncan Smith, a kitten dies. And is then declared fit for work.

I don’t understand why #bbcqt isn’t dominated, every week, by the fact British citizens now use food banks.

IDS thinks it’s unreasonable for anyone to receive more than £35,000 pa from the state. And claimed £98,000 in expenses last year. #bbcqt

Hitler stated that the disabled were a burden on society it couldn’t afford. Cameron said welfare bill cannot be afforded by society today

So you see how the # works. It saves people like me having to watch infuriating programmes.

I over-reacted to someone mentioning an “internet historian”.

Think I’ll put that on my C.V., internet historian. I’ve been on here for 5 years, that’s practically the neolithic.

Tell you what, if I’d have knocked up that C.V. last week I reckon I could be BBC DG now. #missedatrick

"Tony Hall," new #BBC Director-General is in fact "Anthony William Hall, Baron Hall of Birkenhead." They’re doing this to wind us up now…

Health and safety in the workplace went mad:

Religion got a look in:

Someone pointed out: I know you *think* you’ve seen the worst shoes ever, but you haven’t. Not yet 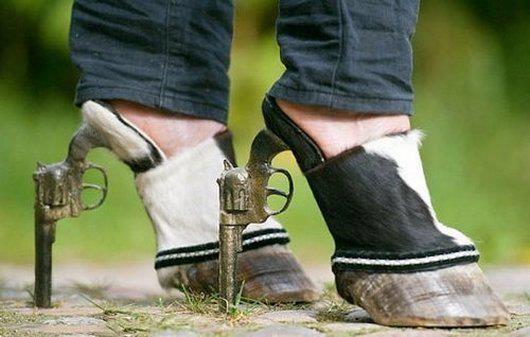 I had to use a truck that one of the drivers reckons was ‘his’. And he’s massively precious about it.

Last time I used it I left him a message “Sorry about the double incontinence, it’s a medical condition. The seat will soon dry.”

"What do we want?" "Freedom of expression through the medium of interpretive dance!" "When do we want it?" *Jazz Hands*

Not sure why I found this so funny. Drunk Australian attempts to ride a crocodile! http://bbc.in/aFRR0v

Jeffrey Archer is against gay marriage. That makes us even, as I’m against convicted criminals being able to sit in the House of Lords.

At a VIP dinner last night an American woman asked me"where are you from?" I said Australia, she said "wow your English is amazing"

Of course we all went mad over Gaza and the Irish letting that pregnant woman die rather than let her abort her mis-carrying baby (that was going to die anyway). But the laughs were pretty scarce on the ground from those. And the women bishops thing. Mainly because they get to sit in the House of Lords so are effectively part of the government, not so much the god-squadding thing.

OK, enough. The fight back starts tomorrow. Clear my to-do list and get on with stuff. Stop stressing about it and get it done.