Bah! As part of my training plan I entered a 10 mile race for today. On Wednesday I thought I’d best find out where I was running. This involved tracking down the confirmation email. Not an easy task as I ordered it on the old computer and it’s not showing on this one. I finally tracked it down on my ‘phone (which is where I’d forwarded it from my old computer for safe keeping. Then completely forgotten about. Genius.) Yep, 10 mile race, at Stockport. I double checked my training plan, goal for the week: ‘Race 5 miles (30 min) or 10k (40min)’. D’oh!

A pox on the French and their new-fangled silly-arse measurement system!

I was still going to do it, even though it was pointless (I run a 10 mile course most weeks just to keep my hand in) and set my alarm for it this morning. I got up, and dressed, realised it was raining, freezing and blowing a gale and sacked it.

I was still going to go right up until the point when I remembered the website said you had to park 1.3 miles away and get ferried to the start by bus. The thought of standing around before and after the race, freezing my nuts off waiting for a bus, was the straw that broke the fat truckers back. Drive up to Manchester, freeze my arse off, run a pointless race, freeze again, then drive back. Nah. I tried to climb back in bed, but obviously I was wide awake (though still knackered) by then. Ace.

I’ll get on Gmaps Pedometer in a bit and mark out an exact course for 5 miles and 10k and run that later. I tried the 5 miles in 30 minutes in the gym on Wednesday, I managed 4.59 miles. Which, my rough maths tells me extrapolates to 6.2 miles (10k) in 40 minutes. If I could have sustained the pace. Hmm, just worked that out as I wrote it. That’s a bit of a big Brucie bonus. I thought I’d just failed. Actually I failed conditionally.

I have another week now of catching up on the ‘fast’ week’s goal. The goal for next week is just to run 16 miles at a steady pace or a half marathon race. No biggie. The week after ends with a 15 mile run in less than 2 hours. Cool, two easy weeks. The week after is 10k (that’s 10K, not miles, K!) in 39 minutes. Three weeks to get up to speed then, I’m not far off the pace as it is, it’s just building the stamina to maintain that godawful pace.

Sorry, this is a bit rambling. I’m working this out as I’m writing it. I’m actually up for that 1:05, in fact I reckon I can probably shave some off that time. Always too ambitious.

Talking of which, while I’d managed to find the emails on my ‘phone I tracked down the other races I’ve entered; a half marathon on the 20.01.’13 (“aim for a 6m/m pace” *gulp*) and that ‘fun’ marathon I’ve entered around Bolton. I followed the link to the website for the latter, (http://www.hillrunner.org.uk/info2.cfm?info_id=107164) which has the sub-heading “some of the toughest running events in the UK”. That should have been a clue. Then there is the fact that it is based around Rivington. Pure evil hills. The fact that it is called the Bolton Hill Marathon could possibly be deemed a hint as to it’s nature.

Then, when you scroll down the site, there is this:

The bottom axis is marked in miles. So the first 3 or so miles are straight up! That’s to destroy your legs. Then you have another 23 miles to run. At about 21 miles, as you are stumbling the last few miles to the finish line, you have another 2 mile ascent. Joy.

You’ll remember this isn’t part of my training plan, this is just a ‘fun’ marathon I threw in for a giggle.

That’s on the 10th of March. Rapid change of plans. I’ll do the speed training through the week, and try to blast my goal on the Friday or Saturday, but Sunday is going to be hill work. Running up and down Frodsham hill or around Rivington. As of next week, I’ve cocked it up this week with the aborted run today.

Also this week I managed to get my place in the Chester Marathon. I was concerned as it’s a very popular one and sells out quite quickly. However, I’m in. Yay!

That is the big one. The one towards which all the the training is focused. The sub 3 hour marathon.

I hope I’ve backed the right horse on this one. I can’t find a direct comparison of say, the Liverpool marathon vs the Chester marathon, but statistically it looks hopeful. In 2012 there were 3,320 runners in Liverpool, of whom 55 cracked the 3 hour barrier. Whilst Chester had a mere 2,072 and managed 84 sub 3’s. Statistically 1.6% vs 4.05%. Even if the extra 500 running in Liverpool were all fat duffers (thus skewing the percentage) it’s still over 50% more people cracked 3 hours at Chester.

It doesn’t mean a thing. Come the day, come the man. Or  not.

I know I said I was going to post all my running rants under one post. Sorry. To be honest it’s about all that is happening in my life at the moment. I can only sustain one obsession at a time. Work is just what I do to bring in the cash. I sleep when I can, I swim at least once a week, and hit the bike for a warm-down in the gym. The rest is just running. At least it is short bursts at the moment, but it is still so very, very hard.

One other thing, I seem to be ill. Yesterday I felt so nauseous that I ended up going to bed in the afternoon, today is going the same way. I thought it was my sinuses, and they are indeed a bit blocked, but I feel really weak as well. Possibly not too well. Ho hum. What a downer on the weekend, though.

Bright side, here’s the round up of the week on Twitter:

I asked Frank Sinatra if he’d ever eaten a heron. He said “Egrets? I’ve had a few, but then again, too few to mention.”

"God made Adam and Eve, not Adam and Steve." God also made Hitler. Your point is invalid.

Your child is being eaten by a camel. Do you a) save your child or b) take a photo 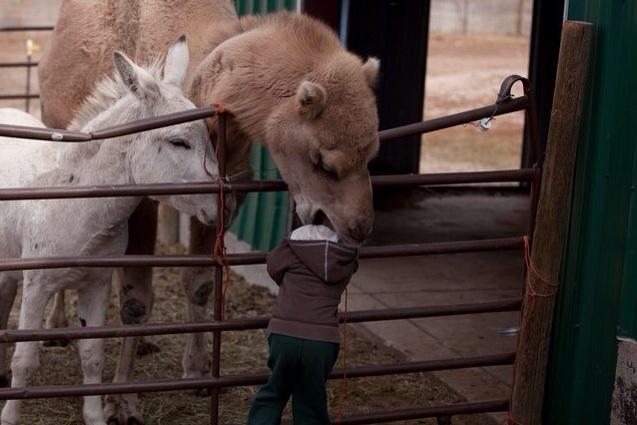 On the three trillion three hundred and forty three billionth day Gravity created the Earth. And Gravity was pleased.

Well, seeing as Ed Miliband has released his Christmas Card.. . Here’s another one, courtesy of #Banksy

People often shout "Go back to where you came from!" at me, knowing full well that I was born in Atlantis. People are so mean.

There was ongoing outrage at Starbucks tax dodging:

Oh, I must have missed the announcement that you can decide your own donation in lieu of Corporation Tax. Will make my year end much easier.

Disgust at the Tories:

The rich get richer, the poor get poorer. Take a bow George Osborne 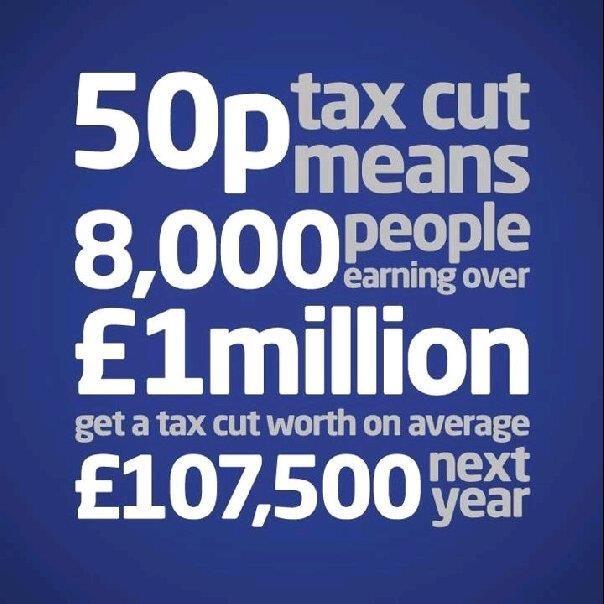 Iain Duncan Smith paid £39 for 1 breakfast courtesy of the taxpayer. I have to feed myself for a week on less

“The Independent’s cover is brilliant” 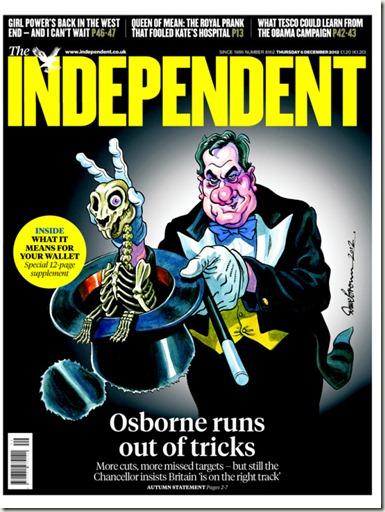 "No miracle cure for the economy," vows Osborne. "Not while I’m chancellor."

Some sage childcare tweeting from a professional nanny:

One kid is asleep. One kid is still stubbornly awake. She must be building up a tolerance to ether.

If a man strikes thee on one cheek, turn to him the other. Then, having shown thyself impregnable to cheek attack, beat the crap out of him.

.Whoever stacked these books is both evil and hilarious. 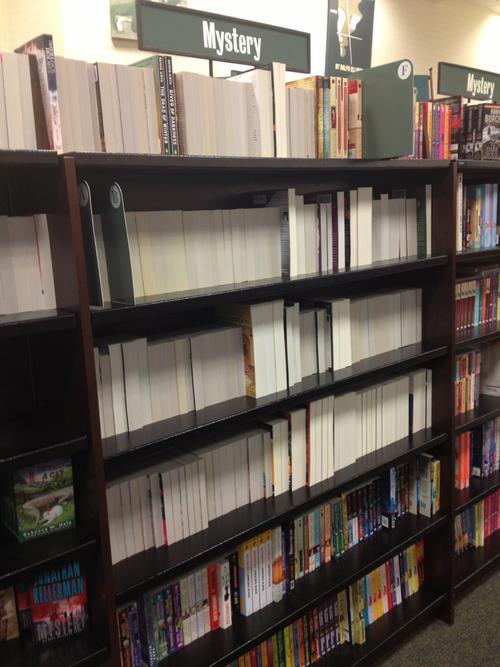 .If a friend asks you to babysit, softly say, "I didn’t think I’d be trusted with a child’s safety ever again." Cry. They’ll cancel. You win.

Royal fever hit with the announcement of Kate being knocked up:

Britain’s most privileged foetus announced. Every less fortunate plebeian foetus shrugs, and prepares to enter a world of obscene injustice.

I observed: Front page of paper, grinning buffoon "Smile that shows Kate is alright". *frown of anger that shows I couldn’t give a fuck*

I also pointed out the ridiculous nature of inserting an asterisk in a word.

There was a rather good find:

A youth judge gave some advice to teens in 1959.50yrs later it went viral.He has an excellent point quite frankly!

And lastly, because it’s the internet, cats. 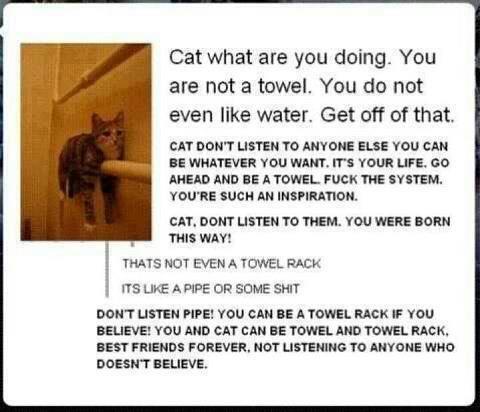 Just when you think the Batman movie franchise might finally be over, hope arrives from an unexpected quarter Good old Twitter, saving my blogs from tedium and keeping me amused.