First off, better update you on the Wendy front. She went back to the hospital on Thursday as an outpatient, the whisked her straight in and scanned the crap out of her. They couldn’t find it at first but kept looking until they confirmed it was a shitload of tiny gall stones, about 1mm each. Apparently this is the dangerous time, when they are still small enough to move and crash vital organs. If they are large they can’t go anywhere. If they are large they must have started small? Whatever. The doctor said they were dangerous now, which is what the pain was; small stones moving and blocking the bile ducts. Whatever they are, or do. The point being, they have to remove the gall bladder.

Wendy hates hospitals, but she is really relieved it is something as straight forward and relatively minor as this. Not that the pain is to be dismissed. Believe it or not Wendy is quite a tough little cookie when it comes down to it. I’ve seen her with a broken arm, with metal rods drilled through her bones, dropped on her head, all sorts of really bad, painful things and she’s never made too much of a fuss. She had an attack on holiday and she was actually crying with the pain. That’s pretty damn bad.

By a strange coincidence, our next-door-but-one neighbour had her gall bladder out last week. It’s obviously catching. She reckons they can do keyhole surgery and have you out a few hours later.

Got to say it has been pretty damn impressive from the NHS so far. That 111 line gave good advice and called an ambulance. The paramedics did loads of tests and reassured us it wasn’t a heart attack. The A&E did a battery of tests and ruled out all the fatal stuff then sent an appointment for a scan. The scan doctor found the tiny gall stones and told her there and then, now we are just waiting for the operation.

Probably the finest thing we have to be proud of, our NHS. Damn Cameron for selling it to his rich mates.

I did that 50 mile ‘run’ last week. Oh dear, oh dear. That was all wrong. What I’d read on the internet about Ultra running (any distance over marathon) was that you ran 20 walked 5 minutes. I was doing it run 25 walk 5. No-one in the race was stopping! Also to walk all hills, first lap no-one did that. So my training was to cock. And it said it was a flat race so I did my training (two runs) down by the canal, perfectly flat. It was up and down hills! I did 35 miles in 6.30, had a 15 minute pit stop to eat and drink before the final lap (I saw someone else quitting while I was there) then set off again. It took me 3.20 to do the last 15 miles! 10 hours 6 minutes in total.

I could have walked it faster. I did my knee on a run the week week before in Dartmoor, that was hurting again within 5 miles. By 24 miles I was in such a state I was thinking of walking back to the start line and quitting. It was an achievement to force myself past the start/ finish tent for the last lap. At about 30 miles I got some really painful blisters that were forcing me to limp a bit. I had to try and grit my teeth until they popped. That last lap though… I thought it was never going to end.

That was probably the worst, most painful, event I’ve ever done. I hated it and thought that was it, I could cross ‘Ultra’ off my to-do list and never think of it again.

The next day I could  barely walk.

The day after that I was thinking I could do it in 8½ hours next year.

I had lots of vague plans for next year, the Lands End to John O’Groats ride, possibly the Ladybower 50 miler again, I’m already in the Outlaw again so I was planning on swimming lessons to try and batter it, maybe the Fred Whitton (that epic 112 mile bike ride around the toughest hills/ mountains in the Lake District) and get a fast marathon.

I was talking to my Swedish chum on Twitter (after I’d posted saying I’ve got another race in a fortnight, but luckily it’s only a marathon) she said “You should finish in the top 10 then.”

That thought rattled around my brain for a few days and finally emerged as my new plan; I’m going to win next year’s Chester marathon.

It’s not going to be easy.

I have a year.

To achieve this (probably impossible) task I decided I needed a treadmill/ running machine. I spent days scouring the internet, reading reviews, comparing prices, warranties, the pros and cons of new versus second hand, then in a moment of blinding stupidity, bid on impulse on one on ebay. I thought it was a high end second hand one, after I’d bid I looked it up and it wasn’t that model, it was the basic mid-range one.

So I’m now the proud owner of a running machine. That will mock me daily about it’s noisy belt and not top-of-the-range motor. And it’s in darkest Darn Sarf, so I’ve had to rent a van to go and pick it up.

Yay! Just got a reply, I’m on for picking it up tomorrow. I’d already paid for the van so I was getting nervous.

Then the real fun begins.

This is hilarious. Or it would be if I wasn’t serious about trying, that makes it merely deluded and a bit sad. I may actually die trying. I’m going to start off with a mile or so at 6m/m to see where I’m starting from, then build it up to full distance over 4 or 5 months. Then start putting 5m/m’s in.

Oh lordy. Even on paper that looks bad.

Still, at least I now have something to get my teeth into. Any fool can go long, only a few can go fast. Let’s see what I’m made of.

If I only get best in age group next year I can work harder for the year after. Assuming I don’t keel over and die trying.

Anyway, enough of me cashing in on possible future glory. For now it’s just hassle, then sweat and pain.

Which neatly takes me onto my final thing; I have decided on my new career path: tattoo artist!

Yes, I know I can’t currently draw a bath and yes, I did speculate on this career before, but that was for Wendy, the artist. I’m thinking 2 or 3 years of constant practise and I might be OK. If not, keep practising. I’ve bought a set of tattoo guns off ebay and a bunch of ‘learn yourself to draw for eejits’ books.

The DMreporter kept us abreast;

While in Politics/ Tory scum we had;

Ed Miliband is definitely doing something right: the Mail is furious. 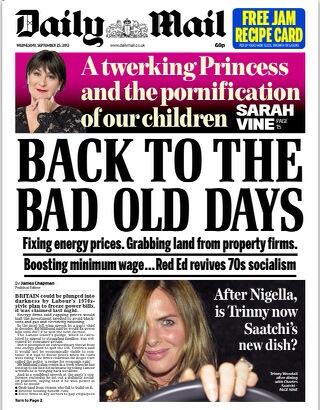 Predictable sabre-rattling from the energy companies. Who would people rather ran the country ? Elected representatives or energy giants ?

Energy companies who don’t think a price cap (at the expense of dividends) is fair or acceptable can always volunteer for nationalisation.

If unions threatened to push UK into darkness over demands not being met, newspapers would scream ‘ransom’. But fine when energy companies?

Unions mustn’t hold this country to ransom with threats of strikes. They should do it by threatening to leave, like the banks.

Cost of HS2 rail link: £50b. Cost of renationalizing rail network (by not renewing franchises once they expire): £0

wonder how many married couples are going to thank Cameron, knowing for each of their tiny bungs, some disabled had to move homes?

And favest of all, general;

BOOK FACT: Cheetahs can type faster than any other land animal but, sadly, their works are often poorly plotted and/or emotionally naive.

I tweeted “Apropos to nothing, if you fold the corners of pages over in books or leave them open face down, there is a special place in hell for you.”

Then got trolled by book vandals;

I also write on my books – underlining, notes in margins etc. – for both fiction and non-fiction. Sorry, Everyone.

Still, not as bad as the person I know of who *tears pages out of books* after they finish each page. True story.

Detach and fold a book’s endpapers and you have a convenient bookmark.

I suppose that saves taking them back to the library

Then I got this:

my dad once caught me bending a book back on its spine. He glared at me and said "I like books more than I like little boys"

never mistreated a book since

(iphone launched with fingerprint unlocking, prompting fears that it would be a database for the NSA. Then some hackers immediately cracked it)

If you have enemies determined enough to make hi-res cast of your fingerprint, you may have bigger problems than phone getting stolen.

I suggested scrotum recognition software. Let them get their hands on that. And it tests the NSA’s commitment.

I’ll bet Satan lists "expert in PowerPoint" on his resume too.

An award winning middle school science project showed, on average 70% of the time ice from fast food restraunts is dirtier than toilet water

I heard the wolf’s at the door, but never the cat. 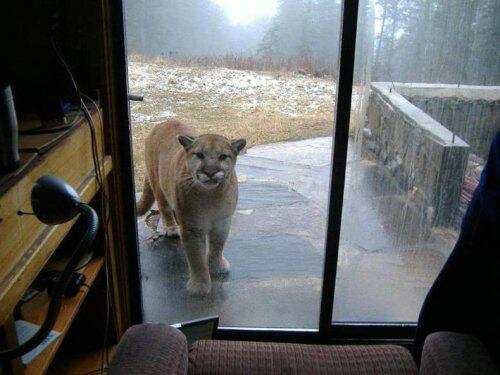 Video: Hilarious viral voicemail of man who witnesses a driver getting ‘rough justice’ from some old ladies

(You have got to listen to that. It’s the best thing on the internet this week.)

Grateful for many nice reviews of my autobiography. Amused that a few complain it’s all about me. Not sure how I could have avoided that.

1. Go to the vets 2. Tell them your fish is poorly 3. Put a fish finger on the examining table 4. Do a sad face

Relax white people, black people have the "N" word. But we still have words like "Yacht", and sayings like "thanks for the warning officer".

I’m gonna go out on a limb and declare "Drugs" the winner of the war on drugs.

5 people followed me because of over enthusiasm, 9 unfollowed because when measured against the scale of eternity all action is vain.

As you can see, I’ve not been on Twitter much this week.

Right, off I trot. Lots of driving tomorrow. For a change.